Following a horrific break up with his fiancé, Luke Bennet spends two years as a social hermit, only going to work and talking with Tina, Gina, and Rita, three friends from high school.

Refusing to let him wallow any longer, they intervene and talk him into going on twelve blind dates to get him back in social circulation.

The Trio have not only planned the dating venues but also chosen the perfect guys to lure Luke from his isolation.

Will he find love through these dates? Or will he run for cover again? 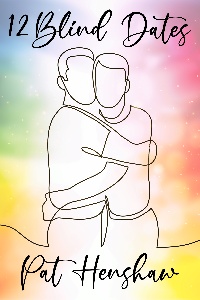 Since dates four and five had already been lined up without Mike and Bert being invited to go on them, we decided to start the foolproof date backup plan on date six. I mean, what could go wrong on Friday and Saturday?

About the most positive part of date four was the date showed up. Equally, that could have been the worst part of the date.

Rita who organized catering for gala events had scored a pair of tickets to the premier of the newest Marvel film at the refurbished mall Cineplex. During the pandemic, the Cineplex had gutted its theaters, transforming its rows of hard-backed chairs into home entertainment seating.

I’d read a couple of online articles about how incredible the new wave of movie theater comfort was becoming, so even if I wasn’t gung-ho about another blind date, I was excited to be one of a pampered audience.

Bernard showed up in a three-piece suit looking like he’d stepped out of a GQ ad. Audience members around us ranged from those costumed to those in theme T-shirts. I wore jeans and a neutral sweater.

After exchanging names and a hearty handshake, we were greeted by people with clipboards who logged us in and told us where our seats were located. As we waited our turn to enter the theater itself, Bernard glanced around and sighed.

“I should have known.” He looked like he was in pain. “Who are these people?”

Thinking it was a genuine question and he’d never seen cosplayers before, I started to answer as he shook his head, disgust written all over his face.

“They have no appreciation of the time, trouble, and creative genius that went into this production,” he said.

“What? No! You’ve got it wrong. They’re the ones who truly appreciate what we’re going to see.”

I realized my mistake almost immediately. Obviously, nobody ever told Bernard he was wrong.

With him ignoring me, we were checked off the guest list, given brochures about the operation of the lounge seats, and ushered into the theater.

I was reading how the seats reclined, featured built-in speakers, sported cup holders with cold and hot settings, and even gave massages. To break our silence, I was about to comment how a massage might put me to sleep instead of enhance the movie experience when I realized Bernard wasn’t anywhere near me.

He was down the row facing a handsome twenty-something in the center chair.

“I don’t give a fuck who you think you are! I’m sure this is supposed to be my seat,” Bernard yelled.

After we were escorted from the theater -- without seeing the movie -- Bernard stalked off to the parking lot and it was the last I saw of him.

Mike thought the story of the date was really funny.

“Okay, wise guy. What would you or Bert have done to help me out?”

“Um, I would have stepped in and explained how we weren’t responsible for your blind date’s actions and let Bernard leave and be his own unhappy self. Then we all would have sat back and enjoyed the movie. You were being too nice to have walked out with him.”

“Not right then he wasn’t.” Mike looked at me with a huge grin. “Did you even get to try out the new lounge chairs?”

At my head shake, he added, “Well, I’m putting them down on our to-do list.”

Our to-do list? How come his words made me feel hopeful? I didn’t tell him, though.

In the end, he and I thought the next date couldn’t possibly be worse.

We were wrong. So wrong.