At work, August’s new job as a firefighter brings opportunity to model for a beefcake calendar. At home, a no strings hookup becomes a regular thing. The new man in August’s life calls himself Memo. He eventually explains it’s a nickname for Guillermo, and with that also reveals something a little bit shocking.

When August is excluded from the calendar for reasons objectionable to some, word spreads throughout the town, and the community becomes divided. Memo says he can’t take sides, which bothers August. August’s work partner Tasha has his back. Why can’t the man in his life? Things are bumpy for the pair and the town, but when something more sinister happens, it not only puts the calendar debate in perspective, it also puts August and his fellow firefighters’ lives in danger.

Can August and Memo work out their differences, or will what they have literally go up in flames? 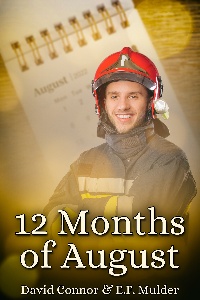 Did she not see August standing right there, he wondered? Did she not know who he was out of uniform? Had he even been inside the bank in the past five or six years?

“What do you believe is wrong?” Memo asked her.

“Promoting the gay agenda in a charity calendar.” Maybe Lily didn’t care. “How dare they?”

August bit his tongue. He knew Memo had a better one, anyway. A better way with words. He’d let old Lily Frame have it. The woman obviously hadn’t listened to one word about love in all things.

“I will pray for healing the divide, Mrs. Frame.” That was all Memo said, and even then, he smiled.

“That’s it?” August asked Memo once Lily was summoned by a member of her coven.

“What’s it, August?” The expression was appropriate to August’s curt tone, a bit of concern, maybe surprise.

“That’s all you say to that bigoted old b -- I gotta get out of here.” August pushed through the back door into the muggy evening air.

“You’re angry with me?” Memo followed.

“Actually, yes.” They had the barely lit courtyard to themselves, and kept on walking until quite a distance from the building. “It would have been the perfect opportunity for you to tell her off.”

“I don’t tell people off, August.”

“Oh Right.” August tried to look Memo in the eye. He couldn’t. Darkness. Disappointment. “I forgot. You don’t tell people that ether.” Then he turned and headed back to toward the church.

“What would you have me do?”

August couldn’t see Memo’s face, but he heard frustration and some sadness in his voice. “Something. Anything. Tell her she missed the message.”

They were back at the door already. Still outside. What was August’s plan? What was he running from or toward?

“I’m new here,” Memo said. “An outsider. Is it my place to intervene in what’s going on? You know I support you.” He reached for August’s hand. “Don’t you?”