In search of a man to share his life, Miguel decides to try looking online on several websites, with little success. Just as he is about to give up, he suddenly connects with Shamus. It seems too good to be true. He and the attractive young man soon form a bond, and Shamus quickly declares his love for Miguel. Completely taken aback, Miguel finds he can’t resist, and the two begin talking about a life together.

But those plans are soon interrupted when Shamus tells Miguel he is being deployed to Afghanistan. He promises he will return shortly and they will then be together. But as he continues to communicate with Shamus while he is overseas, Miguel becomes suspicious he is being used when Shamus begins to ask him for money. He tells himself the man he loves would never do this to him, but the nagging doubt continues to grow until it is impossible to ignore.

Will the two men ever finally meet and share a life together? Or is it all just a scam? 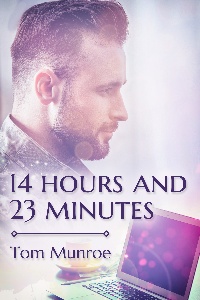 “I can’t do it!” Miguel exploded. “I know I can’t. I’ve looked at every possible way, and nothing is going to work. When are you coming home? When you first went over there, you said you wouldn’t be there very long. These financial decisions are the kind that couples make together. I’m sick of this online stuff. I want you by my side. I want to be able to touch you, hold you. And I want to be in the same room with you when we discuss this stuff.”

“If I could be in the same room with you, and believe me, I’d like to be, I wouldn’t have to ask you to do these things. You know that. You’re not making sense.”

“Not making sense? I think I haven’t been making sense ever since I started talking to you. Anyone else would consider this whole thing a scam and would have broken things off with you a long time ago.”

“Is that what you want to do, break it off with me? After all we’ve been through, all our plans for the future? Now you don’t trust me?”

“I’ve been uncomfortable with this whole thing from the very beginning,” Miguel shouted. “I’ve lost a lot of sleep over it. But you promised you would be back home quickly, and I figured the whole thing would be resolved in a short time. But it drags on. And the more it drags on, the more you ask for.”

“So are you telling me you want to break up with me?” Shamus repeated quietly, in a complete contrast to Miguel’s rampage.

Miguel hesitated. The thought of losing Shamus briefly flashed through his mind, but he pushed it aside. “Shamus, I can’t do this any longer. I really can’t. Our relationship has to be based on other things besides money. And I just can’t continue with the online thing. I need you by my side. Or not at all.”

The cold reality of those words sent both men into a state of shock. Miguel regretted saying them the minute they were out of his mouth, but he didn’t take them back. Shamus just stared back at Miguel in disbelief. He opened his mouth to say something, but no words came out. Finally, all he said was, “Babe ... for real?”

Miguel knew that he was going to have to shut down the conversation before he lost his resolve and Shamus sweet talked him back into giving him more money. “Shamus,” he said finally, “Just let me know when you’re back home, and we’ll talk then. Hopefully in the same room. Maybe then we can make sense of all this.”

And without giving Shamus the chance to say anything else, he ended the call.

There was no sleep for Miguel that night, just a series of bad dreams that always ended with him waking up in an empty bed. He simply couldn’t believe what he’d done, and he regretted every word. Seeing the hurt in Shamus’ face, he’d known immediately Shamus really loved him. And he’d let him go.

Giving up on sleep, he sent Shamus an email early in the morning, begging for another Skype session the following evening. But there was no reply.

And there was no Skype session.