A fear of flying, a relaxing Xanax, plus two hunky men and two unusual bathroom encounters, turn this flying the friendly thighs tale into so much more. 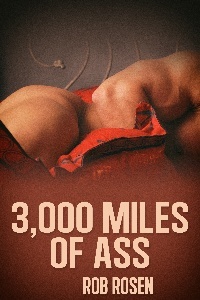 I absolutely hate to fly. Always have. Something about being suspended so many miles up in the air leaves me feeling, well, uneasy. It just doesn’t seem natural for us to be up there like that. And flying cross-country is even worse. I mean, an hour-long trip is one thing, even I can tolerate the stress for that long, but four hours is pure, unadulterated torture.

In other words, it’s no wonder that I wind up in the men’s bathroom several times before each trip. Yep, truth is, my stomach gets that upset. The one saving grace about that particular trip, though, was that it was a red-eye from San Francisco to New York and I’d get to sleep most of the way, allowing me to forget that I was hurtling headlong into oblivion. Still, my belly was in knots before the plane took off and I found myself repeatedly in the john. Now, no one likes to take a crap in public. And three trips to the can is an ordeal I wouldn’t wish on my worst enemy.

Thankfully, it all worked out in the end. Because on my last visit to the bathroom, and with just thirty minutes left until my plane boarded, I was washing my hands in the bathroom sink when I just happened to look up in the mirror and spotted a fine piece of ass at one of the urinals behind me. The guy was short, maybe five-six, five-seven, brown, cropped hair, lean and narrow-waisted, and he had one of the cutest, little bubble-butts that I’d ever seen. Naturally, I lingered at the sink to get a look at him when he turned around. And, man, I wasn’t disappointed. Cute ass and a cute face: the double whammy. He caught my eye in the mirror as he headed over and then stood next to me to wash his hands.

“Where you headed?” he asked, surprising me by starting up a conversation. I mean, it wasn’t like we were at a nightclub, right?

“You don’t like to fly, do you?” he asked, drying his hands with some paper towels.

“How can you tell?” I replied while drying my own.

“This is your third trip in here. That’s usually a sign: either you had a bad burrito, or you don’t like to fly.”

So he noticed me. That was also a sign, and a good one.