Sasha flies into New York from Moscow on a short stay fiancé's visa, and he fully intends to marry the man he met online so he can live in America. Sasha has ninety days to say “I do,” and in his mind it will be the perfect fairy tale romance.

But things don't exactly go to plan with Sasha's intended fiancé, and his dreams of living in New York seem about to slip through his fingers.

Then a chance meeting reacquaints him with Daniel, an old friend, and Sasha falls in love. Now his original plans for a visa are no longer an option, as Sasha doesn't want to marry anyone but Daniel. But does Daniel feel the same way about him? 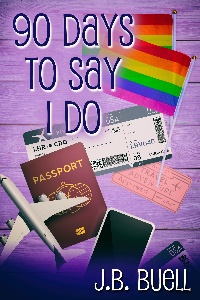 It was crisp, cool weather in New York, but still felt warm to Sasha after Moscow, so he only wore his casual clothes but with a light scarf and a slouchy hat. He had his hair down today, and when he got inside the museum he took the hat off and slipped it inside his jacket pocket.

Sasha smoothed his hair back, and went to pay the admission price.

Modern art was a particular favorite of his, so he couldn't wait to get inside and start looking around. Sasha picked up a small map and took a moment to look at the gallery sections and plan his route.

There was certainly plenty to see.

Inside the drawings and prints collection, Sasha found himself lingering in front of some brightly colored screen printings of shapely butts, quite possibly men's butts, if Sasha had to guess.

Sasha wondered if anyone would tell him off for trying to take a picture of the prints, and he glanced around to see if any security guards were nearby.

That's when he noticed someone watching him, another visitor. Sasha quickly put his phone away and pretended to look at the prints. Hopefully that other visitor wouldn't rat him out or anything.

A long moment passed, and Sasha took a sneaky glance to see if the visitor had moved away.

He hadn't, and he was still staring at Sasha.

Sasha almost looked away, but curiosity got the better of him, and he looked properly at the other man.

He was tall, taller than Sasha. Big, but slim, with a fashionable quiff of light brown hair, and black rimmed glasses like a hipster. At first glance, he was a very handsome guy, overlooking the slightly crooked nose.

Sasha didn't recognise him, but before he could look away again, the stranger approached him. Sasha stared in surprise, wondering what this man wanted.

The closer he got, the more awed the stranger looked, his pink lips parted as if in shock.

Sasha's intake of breath revealed his surprise. He stared back at the man still staring at him. "Yes?" he said carefully.

The man broke into a delighted grin. "I can't believe it's you! Wow, your hair's so long! It was only down to your ears last time I saw you."

Sasha couldn't help but smile in return. This man's enthusiasm was charming. "I'm sorry," he said, hating to be the jerk, "but do I know you?"

"I'm Daniel!" the man said, edging in closer. "Daniel Kelly. We were at school together."

Sasha frowned in thought, wishing he could remember. "Same class?" he asked.

The man, Daniel, shook his head. "Nah, I'm a year younger than you, so I was in another class. I was a bit shorter too." He laughed wryly, shaking his head. "Huge glasses, usually in trouble with the teachers. Oh, and my mom, Sandra Kelly, was the school nurse, if you ever met her. Irish lady. Ring any bells?"

"Um," Sasha said, trying to cast his mind back.

School had been somewhat daunting for Sasha, and he'd changed schools a couple times because of his parents moving around, which hadn't helped.

He shrugged helplessly. "I'm not sure I remember."

"Well, don't sweat it," Daniel said, waving his hand. "Just that you totally saved my ass once, and I may not have said it at the time but you were my hero. That one time Chris Hodgson was going to kick my ass round the back of the school gates? You came in and handed his ass to him so swiftly, I never saw him run away so fast, I swear."

"Oh," Sasha said, a memory flashing through his mind of a determined yet tiny kid with freckles trying to stand up to a giant of a bully. Sasha looked at Daniel closely, studying his face. "That was you?"

Daniel grinned. "That was me."

Sasha smiled back. "Look at you now! So tall."

Now Daniel looked shy, ducking his head as his cheeks pinked. "Yeah, I guess. So, hey, what about you? Are you back in New York?"

Sasha's smile faltered, but he didn't have to share his misfortune. "I'm visiting," he said. "Just taking in some sights."

"Oh, wow," Daniel said, looking at Sasha again like he was something wonderful. "Then I'm lucky I caught you. How long you here for?"

"Um," Sasha calculated quickly, "four weeks, or about that. I haven't booked my return flight yet."

"Awesome," Daniel said. "That's plenty of time to see stuff! You got some time to catch up? Or, uh, are you busy?"

Sasha was pleasantly surprised, and he smiled. "I would love to catch up," he said.

Daniel beamed in response, the smile lighting up his whole face. "Great! What about now? Shall we go get a coffee, or some lunch?"