It's June 1972, and the Vietnam War overshadows Ed Sorenson's life. He's barely out of high school, and there's nothing ahead of him except war and death. On a whim, he packs up his old station wagon with California in mind. He invites his friend Sammy to join him on his journey, never expecting the other man to jump at the chance.

The station wagon barely makes it as far as Nevada. It dies on the shoulder during a freak summer thunderstorm, trapping the two young men and giving them no choice but to face the secrets they've been hiding, the fears they've been harboring, and the desire they can barely keep at bay. 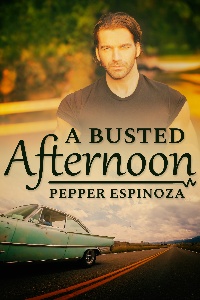 Sammy walked along the shoulder of the freeway blindly, his face burning, his head pounding, his hands curled into fists. His face was wet, and he tried to wipe the moisture for his eyes, but no matter how much he tried, it was a losing game. So he gave up. He couldn't see more than a few feet in front of him, and as far as Sammy knew, there were only two people left in the world. Him and Ed. And now he didn't even have Ed.

It was stupid. He had been stupid. But when Ed invited him to run away to California, Sammy had thought that meant Ed knew. Ed knew what Sammy wanted. What Sammy had always wanted for the two of them. More than that, he thought Ed must have wanted the same thing. Why else even ask him? They weren't friends. Despite Sammy's best efforts, they had never been friends. So what on Earth had been going through Ed's brain when he asked Sammy if he wanted to go to California?

The cold rain ran down the back of his neck. His shirt clung to him, and his jeans were so tight, he could barely move. No matter what Ed thought, Sammy hadn't done anything to sabotage his car. But he would sure as fuck do something to fix it. He didn't care if took him all night to get all the way back to Wendover. He could find a garage there, send a tow truck out for Ed, and then find his own way back to Evanston.

Ed had flung his words like weapons, carefully choosing the sharpest edges, and aiming them at the most vulnerable places. Sammy had thought that Ed, of all people, would be different. Now, he didn't know why he was so certain of that. Perhaps because Ed had always been an outsider himself. Maybe because he had sensed a kindred spirit in the other man -- something he had sensed when they were both boys.

"You hear me?" Sammy shouted with all his strength, but the words flew back in his face. "You hear me, you fucker? Fuck you, too!"

It didn't make him feel better, but he shouted again and again. The rain ran into his mouth and he swallowed convulsively, easing the burn in his throat. What was he going to do when he made it back to Evanston? Maybe he would never make it back to Wyoming. Nothing stopped him from going on to California himself. Ed didn't own the state. And nothing stopped him from continuing east. There was a whole fucking country out there. He could see some of it before Uncle Sam called him to 'Nam. And if Ed got called up, too, then maybe their paths would cross at some point in the jungle, and they'd both talk about Evanston and pretend this whole, ridiculous day never happened.

The thought of meeting Ed in the jungle someday almost -- almost -- made him smile. Until he realized what he was doing. When or how his stupid crush on that boy started, Sammy didn't know. It had just always been a part of him. He always thought he would outgrow it, somehow. Only, he never had. Even though Ed was clearly nothing special. Not anything worth walking in the freezing cold for, in the middle of a painted desert, dozens, if not hundreds, of miles from civilization.

Sammy wasn't even entirely sure what he wanted from Ed. He had heard all the locker room talk about the girls who were easy, who'd put out on Saturday night, then turn around and be all fresh and virginal on Sunday morning. He had seen a few dirty magazines, and there were rumors of films that actually showed tits and ass, but Sammy didn't put much stock in those rumors. And he had grown up on a farm. He'd been watching the animals fuck since he was old enough to walk. Sex really had no surprises for him.

Except that he didn't want to have sex with any of the girls he knew in high school.

He wanted to have sex with Ed. When he got himself off, he thought about Ed working on the farm, without a shirt, his skin brown and glistening beneath the unforgiving sun. He thought about the way Ed smelled after a hard day's work -- the strong, musty scent of his skin, and dirt, and sweat. His hair damp, hanging over his brow. His full mouth parted so he could catch his breath, his dark lashes -- almost as long as a girl's -- shielding his eyes. Ed had always kind of reminded Sam of a girl. His features had always been a little too thin, a little too fine for a boy's. But at some point after their junior year, Ed had gone through a transformation. Now the details that had always been a little off seemed absolutely perfect. He could be an actor. Sammy didn't have a hard time imagining him on a giant movie screen.

He didn't have a hard time imagining Ed in any situation. Which was part of his problem.

"Fucking jerk. Fucking asshole. Who the fuck does he think he is?"