Rachel works most days at a café in the middle of a small British town. Working alongside her is Emily, the confident American Rachel has secretly been in love with for months. Shy and often anxious, Rachel doesn’t know if she could ever act on her feelings, even as the rest of her coworkers raise their eyebrows in disbelief.

As the holiday season approaches, Rachel’s best friend Ryan suggests a secret Santa among the workers and, while she’s certain the game is rigged, Rachel can’t help but be happy when she picks Emily’s name out of the bag. Even after the anxiety about what to get her kicks in.

Rachel has to figure out a present while not making it obvious she got Emily, and what follows is a series of awkward conversations, totally subtle flirting, and more than one Christmas-themed outing. Will she choose the right gift and come to terms with her feelings? Or will she remain in the friend-zone forever? 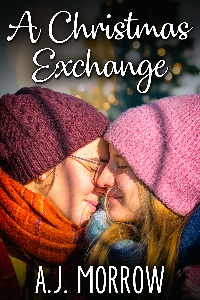 In the centre of town was the Green, a little patch of land where farmer’s markets and fairs were usually held, as well as a popular spot for picnics and meetups when the weather was nice. At this time of year, though, instead of an area of grass with a running fountain, acting as a point around which the roads all wound, there was simply a wide, unbroken layer of white. The fountain had no water and the benches surrounding it looked as though someone had shaken icing sugar all along the wrought iron edges.

What Rachel didn’t know but would soon realise was that, despite the lack of water in the fountain, there was still some frozen on the ground, beneath all the snow. Perhaps an old puddle, or a leakage from before the fountain was turned off, but, regardless of where the water came from, it had frozen in a long stretch right over Rachel’s path.

As she stepped across it, the corner of her boot caught on the slick and went flying forwards, throwing her head back and sending Rachel into the air. She slipped along, gravity taking hold and forcing her onto the ground, neck thumping against the snow as she landed heavily, her bag only slightly breaking her fall.

Rachel groaned. Her ankle had twisted beneath her as she fell and now rested beneath the knee of her other leg, throbbing nearly as badly as her head. There was a dull ache at the base of her neck from where she’d clipped it against something on her way down.

She blinked at the heavy white sky above her. The buildings that surrounded the green were obscured from her new position, so the only thing to break the endless bank of clouds were the birds flying sluggishly across the sky, their dark feathers striking against the monochrome white.

“Rachel? Rachel are you alright?” A voice broke her away from her thoughts, back into the real world, the world made of ice and cold, where she was lying, hurt, by an unused fountain.

“Huh? Oh yeah, I’m fine,” she said. She pushed herself up onto her elbows, wincing at the slush seeping into her clothes. Her jacket was meant to be waterproof.

“Are you sure? That looked like it hurt.” The voice was Emily, of course -- why couldn’t the universe just let her look normal in front of her?

“I think my ankle’s a bit sore.” Rachel brushed the sludge from her hair, glad that the headache was at least clearing.

“Can you move it? You might have broken it.” Emily crouched down beside her, gently taking each of Rachel’s limbs in hand and moving them around to check for injury. “Seems fine, but you probably want to go easy on it today. Maybe call Phil and take a sickie?”

Rachel shook her head. “No, I asked him specifically for this shift. Besides, it’s not that bad.”

Emily hummed in disbelief. “Well, at least stay on till duty. That way you don’t have to walk around so much.”

Rachel went to argue, but the twinge she felt in her ankle when she tried to move made her stop. It wasn’t serious, just a bit sore, but she knew she’d be glad of her bed that night after a day spent more or less on her feet.

When she was happy that Rachel wasn’t, in fact, terribly injured, Emily gave her a hand up and offered to take her bag.

“My, my,” said Rachel, the shock apparently making her braver than usual, “aren’t you chivalrous?”

“Someone has to be.”

Rachel looked up at her, taking in the freckles that covered her nose and the way her mouth curved as she joked about. “You make it sound like a burden,” she said.

Emily grinned. “Not when it’s you.”

“What?” Emily was staring forwards, towards The Hideout, her gaze unwavering. “Am I not allowed to help my friends?”

Friends. Ugh. Rachel hated that word. She hated the way it crushed any hope she had that Emily was flirting -- because it felt like flirting a lot of the time, it really did, but, unfortunately, she knew that this was just how Emily was with her friends. She was very outgoing, after all.

“Thanks for looking after me,” she said, when they’d lapsed into silence for a moment too long.