A Cure for Boredom (MM)

Sequel to Wrong Side of the Law

Bored with the repetitiveness of his job as an actor, Dante Hathaway comes up with what he thinks is the perfect solution. He and his lover, Kade Benton, should rob a jewelry store. After all, with his theatrical training and Kade's makeup proficiency, they ought to be able to carry it off with no problems. They do, and elated by their success, they decide to hit up a gallery next.

They are stopped in the nick of time by Dirk Steele and Maverick, who point out that they know a good deal less than they think about what it takes to pull off a successful caper. That might have been the end of their criminal careers if Dirk and Maverick hadn't decided their theatrical skills could be useful to their team of topnotch thieves.

When they're offered a place on the team, Dante and Kade accept, and soon discover that boredom might have been the least of their worries. 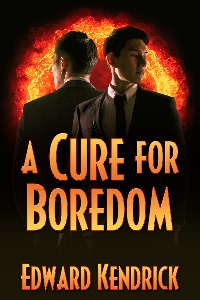 A Cure for Boredom (MM)

"You might want to reconsider what you're doing, Mr. Benton," a man said in a voice barely above a whisper. "There's more security than you think."

Kade swallowed hard as he turned to look at the man. He was about Kade's height, give or take an inch, with dark hair and a nose that had been broken at some point. "I don't know what you're talking about," he whispered in reply.

The man smiled. "I think you do. You and your ... boyfriend?" he phrased it as a question, "-- did a good job at the jewelry store, but this place? No, you'll be caught before you make it to the back door with what you intend on stealing. Trust me on that. I know what I'm talking about. So does my friend." He glanced toward the front of the gallery.

Kade took a panicked look and saw a good-looking blond man deep in conversation with Dante as they stood by the front door. Whatever the man was saying, Dante seemed to take in stride, but then he was an actor and knew how to school his expression.

"Nope. Not even close. I don't work for the gallery's security company, either." He released Kade's shoulder with the suggestion that they join Dante and the other man, who were just leaving the gallery.

With no choice for the moment, Kade agreed.

When the four men were on the sidewalk, the blond said, "Why don't we go to the park down the street. I'm sure we can find a quiet spot there to talk."

"What if we don't want to?" Dante replied defiantly.

"Then you'll miss out on an offer that might interest you, all things considered," the dark-haired man told him.

Dante looked at Kade. "What do you think?"

"Smart man," the blond commented as he began walking toward the park.

Kade moved to Dante's side as they followed, with the dark-haired man right behind them. "They know my name," Kade said.

"Mine, too, which doesn't make me happy. Blondie said they aren't cops but how do we know for sure."

"I guess because, if they were, they'd have waited until after the gallery closed and we'd taken the raku, then they'd have arrested us."

"He's right," the dark-haired man said as they veered right to walk into the park. "Why don't we go over there?" He pointed to a vacant picnic table standing a few yards away.

When they got there, Dante and Kade hesitantly sat on one of the benches while the other men took the one across the table from them.

"Now, down to business," the dark-haired man said. "My name is Dirk. My friend here is Maverick. We know who you are, Dante Hathaway -- " he nodded toward Dante, " -- and Kade Benton. You work at one of the theaters in Portland, and live together. I'm presuming, although I may be wrong, that you're more than roommates."

"We are," Dante replied. "Are those your real names?"

Maverick chuckled. "Let's say they're the names we're known by and leave it at that for now. Is Dante your real name, or a stage name?"

"Real as they come, thanks to my father. He was a great admirer of Dante Alighieri's works."

"More power to him, I guess. Not my choice when I'm reading but hey."

"Guys," Dirk broke in. "Can we hold off on the literary discussion for another time. We have other things to talk about."

"Like why you knew what we were planning today," Kade said dryly.

"Yes. The first time we saw you, you were casing the jewelry store you robbed. It was obvious to us what you were doing, which piqued our interest, so when you drove away I took some shots of your car, Kade. That gave me the license plate number which I used to find out who you were, and your address. When we heard about the robbery on the news ..." He went on to explain what happened after that.

"Hang on, you had someone watching our place?" Dante said. "Why didn't we see them?"

"Because they're good at it," Dirk replied. "Just like they're good at everything we do. Anyway, when they followed you the first time you came here, they were pretty certain what you were doing and let us know. Maverick and I came down to replace them and followed you when you went back to find out what the gallery had in the way of security."

Dante frowned. "We didn't see you there."

"Of course not. The place was busy, which made it easy for us to stay on the down low while we kept an eye on you. Oh, by the way, you did see one of our team the first time you were there. The young woman who came over when you were looking at the raku."

"You have a woman on this team, as you call it? Not that there's any reason you shouldn't of course." Dante added quickly. Then, he looked hard at Dirk and Maverick. "Would I be wrong in presuming this team deals in various kinds of theft?"