When Doyle Flanagan finds two strangers in his library—one dead and the other the beautiful but meddlesome Cady Delafield, his life begins to unravel as all clues point to him for the murder. As the sexual tension sizzles and Victorian conventions crumble, Cady risks job, reputation and family ties to help him clear his name. Even as his life hangs in the balance, his passion for her drives him on, but will the truth about him be the one thing to scare her away? 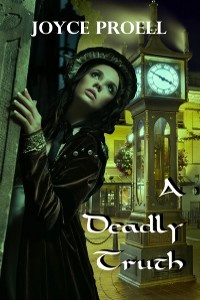 She rang the bell, tapping her foot while an unsettled feeling slithered across her shoulders making her shiver. “Where is everyone?” She jabbed the bell a second time. A home this size often employed several servants, yet curiously, no one answered. The puzzling matter brought forth two other questions which had plagued her all morning. Whom did Fiona meet here last night and where was she now?

Scowling, Cady gave a hearty rap to the door and was surprised to see it creak open. Curious, she stuck her head inside.

“Hello?” Bouncing off the high ceiling, her voice ricocheted with an eerie resonance. A wide, carpeted staircase led to a second floor. Alongside it, a center hallway flowed to the back of the house. “Hello? Is anyone here?”

Her gloved fingers tensed around the door handle. A voice in her head clamored walk away, but she had to find Fiona. When the young woman’s roommate had come to her worried to tears about Fiona not coming home last night, Cady could hardly refuse to help. As school administrator, she knew Fiona was a top student, dedicated, and conscientious and not given to spending the night away from the tiny flat she shared with Rosaline.

When a gust of chilly air pressed at her back, Cady scampered inside prepared to tell anyone she met about the open door. A deserted parlor sat on the right of the entrance while near the base of the stairs two mahogany pocket doors were closed tight.

“Hellooo.” She tipped her head, straining to hear and caught only the wind whistling off the nearby lake.

“This is ridiculous,” she scoffed and marched across the foyer. After one unanswered knock, she slid the door open and peeked inside. Heavy drapes cast the room in a dim light. A figure, no more than a shadow, lay on a sofa.

“Forgive me,” she murmured backing away but something about the woman made her pause.

Getting no reply, Cady paraded over to the bay windows and threw open the drapes. Light spilled through the lace under curtains. “Fiona. What in the world…” Cady spun about and gasped.

Stretched out on her back, head nestled on a pillow, Fiona stared at the ceiling with lifeless eyes.