When Doug signs up for a bachelor’s auction, he has no idea what he’s getting himself into. No one had told him he’d have to walk down a runway, and they certainly hadn’t taken the time to rehearse. Still, Doug would do just about anything for his friend Audi, and he definitely doesn’t mind raising money for a children’s hospital.

When the event takes an interesting turn, and a cute guy he just met spends twelve thousand dollars bidding on him, Doug can hardly say no to a night in the country at Devin’s parents’ house. But is Devin looking for a quick night of fun, someone to impress his parents, or something more? And what can Doug possibly find out about him in just twelve hours? 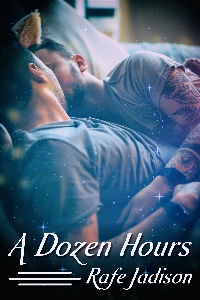 After a minute, Devin held out one of the champagne glasses. “This is for you.”

“Thanks,” Doug said, accepting it. “So what did you want to do for our date?”

“Well, are you free this weekend? I kind of had an overnight thing I was hoping you could join me on.”

Doug sighed. Just when he was about to relax around this guy. “Look I appreciate you spending the twelve thousand dollars, and I’m sure the hospital will be grateful for it also, but like I told you before, I’m not planning on spending the night with you. I don’t have my checkbook with me tonight, but I’ll write one out for the full amount and bring it by tomorrow. Sorry, I thought you might actually want something else.”

“Just wait a minute before you go writing checks,” Devin said. “I already paid the people here, and I don’t need to reimbursed. The overnight trip is at a nice little place in the country ...”

“Let me finish,” Devin said with a smile. “It’s my parents’ house. I wanted to take you to dinner there, and we could leave the next morning. They’ll get worried if we don’t spend the night and try to drive back after dinner. They’ll probably put us in the same room, my old room. It has twin beds. That’s where they put me and my last boyfriend. Of course that was four years ago.”

“So you want to take me on a date to your parents’ house?”

“A dozen hours. Think of it as a thousand dollars an hour going to the children’s hospital.”

“You don’t prefer the movies? Dinner? Miniature golf? You don’t want something like that for a first date?”

“It’s not really a date,” Devin said. “I mean, it could be if you want it to be, but I mainly just want my parents to think I’m dating someone nice so they’ll quit worrying. I’m the youngest, and the only one who hasn’t settled down yet. At forty, it worries them.”

“And that’s why you were talking to Stephanie and me about how your parents would like me?”

“Exactly. Stephanie and I were chatting in the break room upstairs, and we started talking about what we were going to do this weekend. I told her how I was going to worry my parents once again when I went home this weekend without someone special, and she suggested you. She said you were a parent’s fantasy.”

“I guess,” Doug said. “Not everyone’s parents have liked me.”

“Well, mine will,” Devin said. “And I bet you do okay with pets and babies too.”

“I can hold my own,” Doug admitted.

“Good, so can I pick you up tomorrow about five? We can leave before breakfast Sunday morning.”

Doug shook his head yes. “Unlock your phone and give it to me.”

Devin handed it to him. “Is this a test? Are you looking to see if I’ve got someone else in there?”

“No,” Doug answered with a laugh. “I was giving you my phone number. And, now, I’m calling my phone, so that I have yours.”

Doug handed Devin back his phone, and then pulled out his own. “I just texted you my address. Five is perfect. What do I wear?”

“Jeans. A comfortable T-shirt. Shorts would be fine too. Casual is better. They’ll think you feel more at home, and it will look like we’ve been together longer.”

“You mean longer than tonight?” Doug asked with a smile.

“I was thinking we’d tell them a few weeks, at least.”

Doug nodded his head. “Great. I’ll see you at five tomorrow. I’ve got to get my bag out of the back, and I should find Audi.”

“Yes, a rather expensive one,” Doug said with a wink.