Wes and Carlo are celebrating their fifth anniversary, but rather than spending the day at the Pennsylvania Renn Faire where they met and worked together, they have to be at home eighty miles apart from each other. So close, yet so far. Add in some technical difficulties and it’s definitely not the spectacular dinner and a movie they wanted it to be.

Neither is happy with the situation, but they both agree that continuing their quarantine is for the best, even if the Renn Faire is reopening without them. It’s tough, but they’re willing to make the sacrifice until it's safe to be together again. 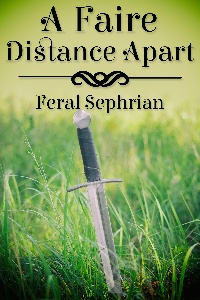 Even though it was just an image on a screen, and even though Wes had seen that image at least once a week for the past five months, he still smiled and his heart fluttered at the sight of Carlo waving to him through their Discord video call. It helped that Carlo was dressed up smartly in his best casual Renaissance garb, just as Wes was, but of course Carlo looked better in it.

“Hey yourself,” Carlo replied. He smiled, though there was a tinge of sadness to it. “Happy anniversary, dearheart.”

Wes blew a kiss to the screen. “Happy anniversary.” He sighed and rested his cheek on his palm. “Wish I could be there.”

“I know, same.” Carlo ran his fingers through his dark brown hair. It was getting long again after he had cut it short back at the beginning of quarantine. Wes liked it longer. There was more to twirl around his fingers when they lay in bed together, both too exhausted or comfy to move unless they really had to pee. Wes’s fingers itched to follow Carlo’s around to the back of his head, pull him in for a kiss, but he hadn’t been able to kiss Carlo for months now. He hated it.

“How’ve you been?” Wes asked. He doubted much had happened in the three days since their last call, but he wanted to hear Carlo’s voice regardless.

“I’m alright,” Carlo replied. He leaned his head on his hands. “I miss you.”

“Mood,” Wes groaned. He lifted his glass of wine. “And here’s to the Faire we’re both missing too.”

Carlo raised his own glass. “Cheers. Hopefully their opening day was a good one and everyone stays safe for the season.”

Wes nodded. “From your lips to God’s ears,” he said, taking a sip. It was cheap red wine from a local shop, nowhere near as good at the stuff he could be getting at the Mount Hope Winery tonight. However, he and Wes had both decided to abstain from participating in Penn Renn this year, even though the Faire had taken many precautions so it could open to the public. Several of their friends and colleagues had done the same. Robert, who had played the older good knight of the joust for many years and planned on retiring in 2021 when he turned sixty-five, had opted to retire this year instead. It simply wasn’t safe for people his age to be out among crowds these days. And even though Carlo lived a short drive away from the Fairegrounds, he wasn’t even going to stop in and say hello to anyone. The families out in the more secluded farms had been keeping to themselves well enough and supporting each other with food and homecrafted goods. A single infected cough could put them all at risk.