Meet shapeshifters and spirits of the forest, enjoy a lovers' reunion and watch friends become something more. Encounter strange creatures, automata, and women on both sides of the law. See two of Jane Austen's minor characters find love together, and others find hope amid the ruins, as JL Merrow explores the feminine side of life -- and love. 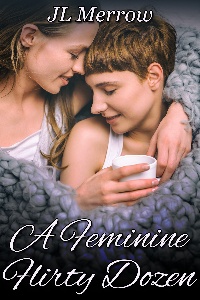 "I can't believe I slept so well. Thank you," she says before she leans in and kisses me softly on the lips.

I want her so bad I could cry. Me, Mel, who never cries. She's all that's fresh and clean and perfect. She don't belong in here, where everything's grimy and worn and a little bit crap.

I just smile back and say, "Any time" and ruffle her blonde curls before getting up.

The first few days in a new prison can be rough. Everyone testing your limits, finding out if you're a sheep or a wolf. No one gives Ella any hassle, though. They all know she's with me.

Course, what that means and what they think it means are two different things. Riz looks at the dark circles under my eyes and nudges Jean and laughs, but she'd never guess they're there because Ella and me lie in each other's arms every night chaste as a pair of dried-up old nuns.

And no, it's not what I'd planned. Course it's fucking not. But there's just something about Ella that stops me making a move. It's like... Well. Reminds me of when it's first snowed -- which happened about once every ten years where I grew up in the South of England. Everything's pure and white and perfect, and you almost don't want to go out and play because making footprints in it would spoil it. Then again, there's always some bastard who'll come along and piss in it. But like I said, everyone knows Ella's with me, so at least I don't have to worry on that score.

Ella's been with me a week (not that I'm counting) before she asks about it. "You're not what I expected," she says, tracing the curve of my bicep with one dainty little finger. She's seen me doing pull-ups on the bunk -- well, she couldn't miss it, could she, not when we're banged up together. Push-ups and sit-ups on the floor, too. I like the way I look, like how I can hold my own in a fight against anyone. I don't mind working hard to keep it.

"Well ... You never ..." and instead of finishing that sentence she takes my hand in her little one and places it on her breast.