A Handful of Joy (MM)

When does never turn into happily ever after in the search for love?

Top accountant of Manzanita Imports in Sacramento, Ted Abbott stopped participating in the love game after he turned thirty quite a few years ago. He’s not tempted by the cute young new hires or the product reps his loyal staff suggest he ask out on a date.

Chicago contractor Matt Patterson is on the verge of giving up too. He’s worked his way up from apprentice carpenter to co-owner of a thriving business. At forty-something, he’s considered a lucky catch for anybody looking for a sugar daddy, which he knows only too well.

The chance of them meeting is nil until Matt’s uncle who lived in Sacramento dies and leaves his estate to his nephew. After they meet in a dilapidated bar called The Roost, could their paths actually merge and become one? 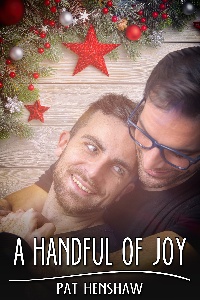 A Handful of Joy (MM)

At the bar, the bartender bent toward a man in a suit with a briefcase at his feet. Even though they looked to be in an intense, but quiet conversation, I realized the only way to get a drink was to approach them.

When I got closer, the guy in the suitcoat appeared to be in my age range, slumped as if he too had been sitting in interminable meetings all day. His brown tweed suit with its complimentary beige and white striped shirt and forest green tie might have been snappy and pert this morning, but his outfit was discouraged tonight.

“Hi. Mind if I sit here?” Since we were the only two at this end of the bar, politeness required I ask. I didn’t want to seem pushy or crowd him if he wanted to be left alone.

“No. Go ahead.” He moved with a slide of his butt away from the stool next to his. “Help yourself.”

With his slight movement, our shoulders weren’t in jeopardy of touching. Since I wasn’t there to hook up, I didn’t take it as a rejection. He was merely being polite.

The bartender had wandered away during our adjustment, but now he ambled up and leaned toward my companion who gave him a nod.

Even though I was slightly curious about the lean and the nod, I ordered as if nothing odd had happened.

“Nice night. Fortunately, the winter rains haven’t started yet.” I took a sip of my favorite ale. At least my drink of choice had survived all the changes and was still on tap. “By the way, I’m Ted.”

I took another sip of ale.

Beside me, Matt muttered under his breath, “I just landed here from the Midwest.”

Okay, I’d started the ball rolling. He’d pushed it gently back into my court. I could either let the ball lie at our feet and ignore it or I could push it a few more inches toward a conversation.

With a side eye glance at his weary face, I let the ball die. I’d been talked out at the yearly state-of-the-company meeting.

One of the things I’d always really liked about the Roost was the absence of wide screens and inane sports chatter. I turned on my bar stool, faced the empty space, put my elbows back on the bar, picked up my glass, and surveyed the room.

Not only was Patsy Cline singing about walking after midnight but some of the old-timers swayed like they could see themselves dancing with her. A quiet charm settled around the room changing the gloom into gentle arms holding us away from the bustling world outside.

I’d almost forgotten about Matt sitting next to me until he nudged my arm softly. The song had changed to a very scratchy rendition of “At Last” by Etta James.

At first I thought he was joking. One look at his somber eyes convinced me he was serious, very, very serious.

A quick glance around the room showed me no one was watching. We could have been invisible.

He was right. Why not? Why not dance? When was the last time I’d put myself out there?