In the aftermath of a tragedy that leaves him with permanent scars, Sir Aurion of the Knight's Brigade is about to go for an early retirement. He believes his diminished strength means he cannot be the capable second-in-command the Knights deserve. But before he can put down his sword for good, he yearns to try and prove himself as a capable warrior to his captain, Sir Diroze.

Aurion has been dueling against Diroze for over a decade, and has never won a single match. Which isn't too surprising to the rest of the Knights -- Diroze has more than earned his title as captain, and has never been defeated by anyone. With this final attempt being his very last chance, will Aurion pull off a victory against the odds? Or will his captain, a man who may have an agenda of his own, be the one to strike Aurion down for good? 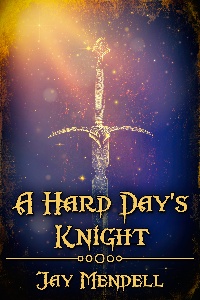 “Captain!” Aurion quickly jogged over to his commanding officer, briefly bowing his head.

“Aurion,” Diroze said, turning to look at him. “Welcome back. You have been sorely missed.”

“I was only gone for a few hours!” Aurion laughed, but he knew what the Captain meant, and steadily avoided his gaze.

Aurion twitched, holding back a grimace. When he managed to force a smile back on his face, he finally spoke.

“Well, they’ve been better, honestly. But hey! What can you really expect, right?” Aurion’s cheer was a thin veneer, and he knew that Diroze would catch on, but there was little else he could do with himself at the moment.

"You have survived," Diroze said quietly. Aurion glanced up at him, startled at the sternness of his tone, and Diroze firmly held his gaze. "There is no shame in that."

Aurion laughed, just a little, scratching the back of his neck. "Glad you think so."

Pretty words. It would be nice if more people believed that. But Aurion had had too many people shy away from him in recent weeks, wrinkling their nose at his new scars and whispering behind their hands. It wasn't like none of them had scars -- but something about Aurion, about the Knight caught in perpetual second-place being the one to suffer debilitating injuries -- something about that inspired more scorn than any similar case.

Aurion suspected that there was a touch of vindication in that. He couldn't count the number of times he'd been challenged for his position by newer, younger Knights, from more prominent families, utterly sure of themselves and their abilities in the way only the never-beaten could be. Aurion had come by his place in the Knight's Brigade honestly, even as the son of a mere merchant, and there would always be those who wouldn't accept that. To them, he was sure, his new status must have felt something like retribution.

"I'm serious," Diroze insisted, pulling Aurion out of his increasingly dour thoughts. "You have my respect, Knight Aurion. That has never changed."

Aurion ducked his head, feeling a wry smile tug at his lips. "I believe you, Captain. Thank you."

And he did believe it. Diroze was many things, but he was not a liar -- nor was he the type to overstate his feelings. His respect was true, Aurion could tell that much.

But respect alone was not enough. Not this time.

Aurion twitched, startled when a heavy hand landed on his shoulder. He looked up, raising a brow, as Diroze patted his shoulder once, twice, before pulling away, a tinge of awkwardness cracking his stony exterior.

"As long as you know," he said stiffly, before clearing his throat. "Come. We must oversee the training for the new recruits."

Aurion sighed, shoving his hands in his pockets as he trailed behind his Captain. "Sure you want me to come along for that?"