Student of letters, Micah Yardley wants one thing: to meet the poet Jefferson Dering. After hearing his idol speak at Harvard, Micah travels to Jefferson’s home in nearby Wroxham, entertaining visions of discussing poetry over dinner and drinks. What he experiences exceeds anything he ever anticipated.

Jefferson finds Micah mesmerizing and passionate, everything he has ever wanted. But after getting caught in a compromising position with another young man a decade earlier, he exiled himself from Boston and from affairs of the heart. Jefferson represses his longing for Micah, but his tumultuous emotions cannot be contained.

Micah denies the truth of his desire for Jefferson. Jefferson refuses to act on his passion for Micah. But all it takes is a single kiss in Wroxham's haunted church to change the course of their lives ... and ignite the flame that could fulfill a generations-old promise. 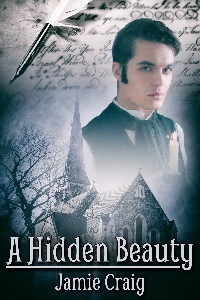 "When you can't sleep because you are consumed with thoughts of the person. When you can't eat because you have lost your appetite. When simply catching a glimpse of ... her is enough to make you smile all day. When your body tightens and feels electric, like a summer thunderstorm, at the briefest contact. That's when you start to know."

He caught a flash of white when Micah smiled.

"That describes how I feel about poetry. What happens to me when I'm particularly moved. Even tonight, when you read. That was why I couldn't sleep, you know. I couldn't stop thinking about it."

Jefferson's internal debate was short-lived but lively. Ultimately, he merely nodded and said mildly, "It's not uncommon to find the same sort of…excitement in pastimes you are interested in or passionate about. And you are clearly very passionate about poetry."

Chuckling, Micah nodded. "Too passionate, some would say. Though, thankfully, not you."

Jefferson wanted to know if Micah was only passionate about poetry. He imagined there was a whole universe of emotions, of needs, of hungers waiting inside of Micah's body. He just needed somebody to show them they existed, show him what to do with them.

"No. But I don't think there is anything wrong with being too passionate."

"So..." Micah prodded him good-naturedly with his elbow, his spirits clearly lifted though how, Jefferson had little idea. "I've shared the reasons for my insomnia. I've still to hear what it is vexing you."

Regardless of his earlier promises to himself to not make the same mistakes, Jefferson ached to tell him the truth. You are in my mind and under my skin. You're there when I close my eyes. I want to show you things poetry can only hint at.

"I have always been afflicted with insomnia. I am not sure why." The words were barely out of Jefferson's mouth when the reverend's large Bible fell from its place on the pulpit. They both jumped as the solid book hit the wooden floor. At Micah's startled glance, Jefferson said quickly, "It was just the Bible slipping from the stand. That's all."

Micah nodded and something kind gleamed in his eyes. "Do you always come here, then?"

"I come here often. I find the church very peaceful." Jefferson rubbed his hands together and smiled. "Despite the chill."

Jefferson hesitated for a moment. Keeping himself under control was an almost Herculean effort without Micah touching him. But the desire for contact overwhelmed his better judgment. He nodded and silently offered his hands.

Micah's grip was light and nimble. Rather than using his smaller hands to warm Jefferson's, however, he cupped and lifted them to his mouth. His soft lips brushed over the side of Jefferson's palms as he pursed them, and a rush of heated breath flowed through their fingers.

Everything inside of Jefferson's chest seemed to melt, even as his shaft began to harden once again. He froze, his gaze locked on Micah's face as he took another deep breath and released the warm air over Jefferson's skin. He knew he should not just let Micah continue to warm his fingers like this, but he could not pull his hand away. He couldn't do anything except hoard each second.

The bank of candles in front of them simultaneously ignited, each small flame fighting against the dense night surrounding them. But the candles were nothing. He was enchanted by the golden light shining on Micah's skin, reflecting off his dark hair, and disclosing his sweet, brown eyes.

The moment was brief. It could have been nothing more than a flight of fancy, or a glimpse of a waking dream. Micah looked down and blinked, as though his eyes were sore, and then everything was plunged back into darkness. But Jefferson knew he wouldn't forget the image of Micah illuminated, like some sort of celestial body.

When Micah finally lowered their hands, there was a smile on his face. "Might I beg another request?" he asked without letting Jefferson go.

"Yes." His voice sounded too rough and too low. "Of course."

"When you find you can't sleep, might I join you? Here? I can't think of a more pleasant way to spend the hours." His grin widened. "And I'll remember to bring my gloves."

"Yes." He smiled, and hoped the smile didn't look strained. He wanted to show Micah that he could be wanted, cherished even, despite his own personal discomfort. "If you don't mind spending time in a drafty church, I will be more than happy to have your company."

Wishing and Hoping (MM)
Tinnean
In Shelf
$2.99
Tweets by
sirenbookstrand