A Matter Of Passion

Clay arrives at the home of his older brother's mistress to claim their love child. However the mistress who died giving birth insisted her sister, Ellie, raise the infant. Ellie flees with the babe but Clay follows. Circumstances force them together and on the paddlewheel boat north they discover true love themselves. 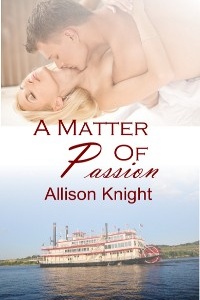 A Matter Of Passion

He jerked to attention as the mistress came forward leading a small parade, a bundle in her arms, her servants trailing behind. He stood at the railing stunned. Her appearance was a shock.

Properly clothed, she was beautiful. Her face was oval, her complexion cream, her brown hair, glistening with its streaks of gold, was braided and worn like a crown on top of her head. As the group came closer he decided her eyes were her best feature. They were large, widely spaced and a warm brown – inviting eyes, a courtesan eyes, with dark brows arching above them.

She carried herself with regal grace, her curves telling him she was all woman. Her lips were full and a sober expression marked her countenance. She strode forward with confidence and he smiled, guessing that attitude was a result of thinking she had escaped. For an instant, he couldn’t help the admiration he felt.

Desire swept through him taking him completely by surprise. Good lord, she was his brother’s mistress. He couldn’t feel anything for her. Still, he couldn’t deny the effect she had on him. Nor was she the kind of woman he thought Matthew would have.

He dragged his gaze away and noticed he wasn’t the only man on deck watching her. She looked nothing like the harassed woman he’d seen peeking around the door earlier in the week. As he watched, another thrill shook him. He told himself it was because she was a beautiful woman, and what red blooded man didn’t get a thrill looking at such a woman.