Can the crew survive or will the beasts kill all of them?

A spaceship is sent to a moon called Heja to find plants that can be used to cure cancer. The spaceship crash-lands on this celestial body. The crew must find a way to escape because dangerous beasts roam its jungles and deserts. 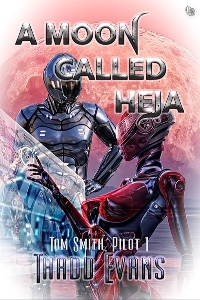 It was the year 5014 on my home planet, Afan. I entered my supervisor’s office.

His name was Delm and he was frowning.

“Tom, I have a new assignment for you.”

“Okay.” I sat down, my mind racing, wondering what he would say.

“Nen Pharmaceuticals and GSA want to send a spacecraft to Heja because fourteen plants on it can be used to cure eight types of cancer.”

I shivered, a nervous response. GSA, short for the Global Space Agency, built most of this planet’s interstellar craft. Three months ago, satellites had discovered Heja, a moon that was five light years away from us.

“The first interview will be with a copilot, a shape-shifting robot called Eve. She is a new prototype called TAS, short for Technical Assistant.”

My stomach tightened. Too many androids broke down in jungles, oceans, and other places. “Is she durable?”

“You’re experienced. Figure that out for yourself.”

I recoiled, showing irritation. He didn’t answer my question. If she broke down, would they tell me it was my fault because I picked a flawed android?

He clenched his teeth and said, “Then go to different jungles and deserts to interview the rest of the crew. Observe them, talk to them. Are they suitable? If not, find the best.”

“Nen and GSA have spent a lot of money on this.”

“In a few minutes. I just sent more information into your contact lenses and your nanites.”

Years ago, GSA and MAA—Mind Adapt Agency, had injected nanites into my bloodstream. These tiny robots improved my ability to solve complicated questions. “Will the war in Keer spread?” Keer, a country, was on the opposite side of Afan.

I stood and exited the room, information appearing in my lenses.

I left the building, stepped inside a celestial craft, waved my hand over a control panel and the ship took off.

Eventually, I entered Xann. A tall Qio humanoid male with orange skin, a stranger in a suit said, “Welcome. Come with me.”

He grinned. “In a short while.”

Both of us walked past android heads, feet, hands, ears, eyeballs, and fingers, all of them on shelves. He pointed at them. “These are some examples of what we produce. Each body part is custom made.”

I sighed, bored. “Thanks.” Up ahead, a white woman in a gray uniform jumped upward sixty feet and landed on a balcony.

The man pointed at her. “She is adaptable.”

Without warning, the man changed into a beautiful, five-foot eight-inch tall white woman. “I am Eve.”

She asked in a flat tone, “Why are you here?”

I answered, “I am traveling to a moon called Heja to find plants that can be used to cure cancer, and I need a crew.”

“My supervisor told me about your journey. I would be an outstanding crewmember. It is time to depart.”

“What kind of aircraft can you fly?”

“Great.” Stellar Craft was designed to fly around planets and moons. Interstellar Craft traveled between these. Flexible Craft went around moons, planets, and between them. “How many times have you flown in three-D holographic environments?”

“Outstanding. How many times have you flown around real planets, moons, and between them?”

I paused, my jaw muscles tight.

“Judging by that expression on your face, my lack of experience in the real world bothers you.”

I exhaled, trying to relax.

“Are you going to hire me?”

She looked straight ahead, a blank expression on her face.

“Let’s go outside and leave.”

The craft shot out of her neck and we stepped inside the flying machine.

She said, “This ship is called Bright Spirit.”

“Do your contact lenses have panels that control it?”

“My optic nerves control it.”

“Amazing. I’ve never heard of an optic nerve doing that.”

“This tool is three weeks old.”

“Has it been tested in the real world?”

“Only in three-D holographic environments.”

I cringed. “How many times has it been tested in those environments?”

My breathing sped up, a worried response. “The tool should have been tested at least thirty times.”

I paused, trying to relax.

“Judging by that expression on your face, you don’t think I can fly this.”

“You could say that.”

Chills ran up my spine. “Go ahead.”

“Do you like compliments?” Because she remained stony-faced it was hard to tell if this achievement pleased her.

“I’m trying to get used to them. By the way, I just exported data into your optic nerve. From this point on a control panel will appear in your field of vision. You can use that panel to fly Bright Spirit.”

She offered a slight nod, one that was barely noticeable.

“The next step is interviewing Dr. Gary Lake. He is a geneticist and an animal behavior scientist who studies lemurs in the Disig.”

“Correct. Is that information in your lenses?”

“You imported that data in less than a second, faster than anybody I’ve ever met.”

She kept staring straight ahead. In her pupils, white lines raced from top to bottom, indicating that she was organizing graphs. “I’m well designed. Archives indicate that you have flown between Iap, Ejj, Yela, and Afan eighty-one times.”