A Short Essay on Love (MM)

English writing tutor Steve Smith only has two more semesters to graduate from Vermillion College in California. Then he hopes to get a top-paying job writing copy for a tech firm. Until he reaches his self-fulfilled dreams, however, he’s working his way through school without borrowing from his successful Chinese-American parents.

Vermillion football star Jason Woodard, on the other hand, grew up in a state-run home and is struggling to make his athletic scholarship and all that goes with it mesh with his academic requirements. He too is about to finish but, having put off first year English composition, has to rely on the writing lab where Steve works for help with an essay about love. Since Jase says he’s never encountered love, he can’t figure out how to write his essay.

As they talk about love, they discover two things: falling in love is easier than talking about it and nobody in the school’s athletic program wants two guys to fall in love.

When the abuse of athletes across the country comes to light, Steve realizes Jase too has been abused and needs more help than a tutor can give. 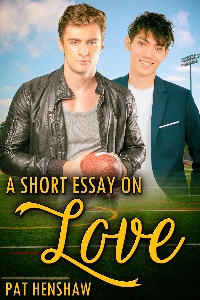 A Short Essay on Love (MM)

The game had been a rout, just like Jase predicted. As they walked up the steps to the fraternity house, Jase was apologizing again.

"When we get in there, I'm going to the kitchen. You stay in the living room," he warned.

Sitting on the couch with another guy surrounded by super-hyped girls, Steve wondered if the kitchen wouldn't have been the better choice.

"So you came with Jase?" the slender, nearly effeminate guy asked. "I'm Gordy, by the way."

"Steve." He extended his hand and Gordy giggled, a sound that surprised Steve. The girls around them were giggling and bouncing around each other. But a giggle from a guy?

"You're not his usual type," Gordy commented with a smirk.

Steve decided to let that pass. So far in his life he hadn't been anyone's type, so why go there?

"What's up with the kitchen?" he asked instead.

"Oh, they're rehashing the game. Jase hasn't been playing as well this semester. Not since he met you anyway. They're gonna give him hell." Gordy took a breath and moved closer to Steve. "They just don't think he's got his head in the game. They even think he lost the game for them tonight."

"Doesn't matter. The other team shouldn't have scored at all. As far as our guys are concerned them scoring is the same as a loss, and it's all because of big ole Jase."

"Huh." Steve didn’t understand, but he let it slide.

He felt a little like Alice after sliding down the rabbit hole. Were these really his contemporaries, his classmates? They seemed like they came from a different planet. Maybe he’d been hanging around with the English and art crowds too long.

It had only been an hour, but it felt like days before Jase walked out of the kitchen and muttered, "Let's go" to Steve.

In Steve's Prius, they sat a while in silence. Jase didn't seem to be angry, just nervous and upset.

"Where to?" Steve asked, putting his hand on the ignition key.

"Look, I'm sorry." Jase twisted as if trying to find enough room for his body in the passenger side of the car.

"Why were you late getting to the game?"

"Not your problem." Steve laughed again. "C'mon, you have to agree it's funny. We don't look like we hang around together. And I don't look like a Steve Smith. You said it yourself when I met you."

After switching car for truck, they went to Charo's Garden for Mexican food. Steve assured Jase that the waiter's "Hey, we don't got no Chinese food here" didn't faze him.

"Happens all the time. Goes with the territory," he assured Jase.

What didn't go with the territory was the way Jase kissed him after he drove them to a secluded spot along the river and they climbed into the truck bed to look for shooting stars. The ones they saw behind their closed eyes as they made out were much more brilliant than any in the sky.