A Taste Of Evil

Famous novelist Julia Raymond is found brutally murdered in the grounds of her estate in the English Lake District. Her death throws suspicion on her husband and sister, both of whom have reasons to want Julia dead.

The discovery of another vicious murder of a woman in nearby woods terrifies the close-knit community and police suspect the work of a serial killer who appears to be obsessed with Julia.

Unable to leave the scene of her crime, Julia’s spirit watches as the police investigation gradually reveals her family’s terrible secrets. 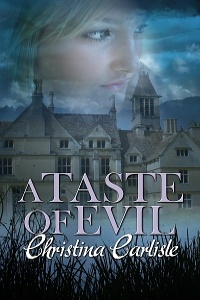 A Taste Of Evil

No one would worry about me for a couple of hours and then around 5:00 p.m., Laura would stroll across the lawns carrying my usual gin and tonic. When she couldn’t find me, she would walk into the woods heading for this place. She knew my routine so well.

I had an unhealthy desire to see her reaction to my body. Would she throw my drink into the air in shock and then yell and scream? Or was it only in my books that these sorts of reactions occurred? At least, I’d be able to tell whether she was the killer or not.

Who had murdered me? And why? The person was strong but he’d had the element of surprise when he attacked me. Also, I was at a disadvantage in a sitting position allowing him precious seconds to wind the wire around my throat and exert savage pressure on my windpipe.

I’d been garroted. I hate that word. It sounds so guttural and gruesome. I had used it as a form of death in a couple of my books, always with a sense of uneasiness. In my research and the plotting of novels, I had a lot to do with the police, forensic scientists and pathologists. Their expertise was essential to the credibility of my writing and now I thought about some of the things they had taught me during the past seven years.

The killer had carried the piece of wire with him, the wire that was still buried in my neck with the ends tangled in my blonde hair. He knew my afternoon routine and I had walked into my death.

Leaving the analysis of how he had murdered me, I considered who would want me dead and whether the killer was male or female. I’m only too aware that I can be very difficult, and that I’m known for my eccentric sense of humor. I prefer to call it quirky, perhaps a little too offbeat at times. Also, I have often been told by my husband that I can be insensitive to peoples’ feelings but surely, I wasn’t wicked enough for someone to kill me?

I thought about the people in the house. My family, my agent, Laura, and our housekeeper, Shirley. Could one of them have murdered me? No. It wasn’t possible. They needed me.