After the tragic death of his fiancé, twenty-two-year-old Damon brings a dozen white roses to the cemetery to adorn Viktor's gravestone with. When his tears fall on the petals, a mysterious voice thanks him and offers him a unique gift in return. Viktor has the miraculous chance to come back to life for twelve days, albeit with some drawbacks from the fatal attack. Nevertheless, Damon is grateful to even have the love of his life back, even if temporary.

Unfortunately, Viktor's new state means he can't be seen in public without a disguise, especially not by his grieving parents. He can't even see his own reflection because it's forbidden and goes against the conditions of the gift. This complication puts his happiness at risk because he might not like what he sees in the mirror, and it's something that needs to be avoided at all costs.

Damon must make a difficult decision. A sacrifice of some sort is the only way to permanently restore Viktor's life beyond the twelve days and bring him back to normal, but it comes with untold consequences that Damon must blindly accept. Will he make that sacrifice, or will he face losing Viktor forever? 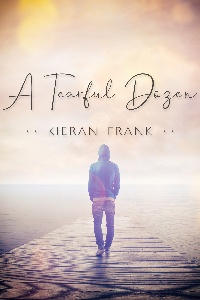 At night, the door knocked several times while I was on my knees in front of the bed. I had just finished praying for three hours, pouring as much faith as I could into every word I'd uttered. Despite my birthday today, I didn't need company, preferring to be alone and grieve in private. Managing the loss of Viktor was only the beginning, and there was no telling what the scary future held.

I quickly got up and changed from gyms shorts to a pair of jeans, and I threw on a tank top to avoid being shirtless in front of guests -- out of respect. I glanced at the large window just a few feet away, feeling lonelier than ever in my tiny studio apartment. The streetlamps on either side of the road shone a yellowish hue on the paved sidewalks, attracting various flying insects as if bespelled. Viktor and I had regularly ridden our bikes on this road, both for exercise and adventure. We'd hung out at various places, especially the main park, along with a chilly swim in the never-warming lake that never lasted long each dip.

I yawned and trudged toward the entry door. Rubbing my eyes and letting out another yawn, I was ready to go to bed earlier than normal. Through the peephole, a tall man stood in the dim hallway, his hooded head lowered. He wore black jeans and sneakers as if ready to rob someone -- no one dressed like that here. Who was he, and what did he want? He seemed about my age, maybe a tad younger, but it was impossible to tell.

His pasty knuckles startled me with yet another series of knocks, harder this time. But the way he knocked looked unenergetic in movement.

Should I answer the door? No, it was a bit risky despite being generally safe in this small town by the lake. Instead, I politely raised my voice. "Who is it?"

The guy grumbled something, but it was impossible to make out what he said.

I swallowed, the uneasiness increasing my heart rate while beads of sweat dampened my forehead. What an unusual situation. Everyone knew everyone here, so either this man was lost, or he wanted trouble. "I'm not opening the door until you tell me who you are!"

The guy lifted his head and gazed at me with light eyes, but it was too dusky to see his face clearly. He couldn't have been older than me, though. Then, he made a tunneled heart with both thumbs and the rest of his fingers.

My heart pounded harder than the door at the familiar gesture. No, it was impossible -- it couldn't be!

I stepped back, a series of drawn-out puffs coming out of me. Was it really him? Trembling, I searched for my inhaler, always making sure I had one in every pocket. I soothed myself into calmness, if just for a moment. Then, I rushed to the kitchen to rinse and gargle with a bottle of water. When I returned to the door, I realized I was no longer in danger, or so it seemed, but my mind was still puzzled with confliction.

The guy grumbled louder in the most familiar way, like when he had been tired or moody many times.

No! He was supposed to be dead! Yet who else could that husky voice belong to? There was only one person with a voice like that. But how could it be? Was this the mysterious gift the fatherly voice had had in mind?