Hope is in a giving mood this holiday season, a year after being rescued from the pits of despair by her boyfriend, Sam, last Christmas. She wants to pay it forward to her friend, Julie, but is at a loss for how.

But the spirit of giving is strong with her. How many times can she pay it forward? 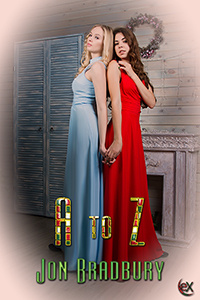 The only bad thing about working the evening telecast, Hope thought, was that all the admin people, like Human Resources, were either just going home by the time she got there or were looking forward to going home.

As she plopped her purse on her desk at her cubicle, she took a look around to see if anyone from HR happened to be lurking about.

Just as soon as she did that, however, someone came right up to her. He was rather young, sporting his usual outfit of a sweater vest over a shirt and tie, dressy slacks, and fairly nice canvas sneakers that matched his slacks.

“Your vacation time for next week was approved.” He handed her a form letter.

“I’ll try not to.” She dropped a kiss on his forehead. “Don’t eat too much of your mom’s giblet gravy, okay?”

“Thanks,” he said. “Enjoy your holiday.”

“Thanks.” He must have seen someone else he needed, because he said, “Miss Lee.”

Hope turned around. Julianna Lee, her co-anchor for the late evening broadcast, was also just coming in.

At the mention of her name, Julianna raised her head with a smile. “Did someone say my name?”

The HR kid went over to her and said the same thing, that her vacation was approved. She had all of Thanksgiving week off next week, Hope knew.

“What’s wrong? I thought you would be happy to have the week off.”

But Hope didn’t get the chance to question her further. A male voice called out from the other side of the newsroom. “Hey, you two, get in here. We don’t have all day.”

“Right,” Julianna said glumly, apparently more to herself than to anyone. “Let’s go.”

But Hope wasn’t able to do anything about her concern until after the 10PM news brief.

Startled, Hope turned to Robin, who had somehow been standing next to her. “I won’t ask how you know. You’re getting too good at that.”

Robin chuckled. “That’s what my husband says. But you are worried about her.”

“Yes.” Hope exhaled. “I’m worried about her. But I don’t know what’s wrong. Although I do have an idea.” Julie had just let loose another quiet sigh.

“Well...I would imagine she’s feeling like she’s all alone. I was at that place last year, if you’ll recall what happened.”

“Yes,” Robin said. “For some people, the holidays cause profound sadness and anxiety, for the same reasons the rest of us find it the happiest time of the year.”

“I’m sure you also remembered how to get out of it.”

“Yes,” Hope replied softly. “Although it wasn’t my idea, strictly speaking. Someone had to take my hand and lead the way out.”

Robin slipped her arm through Hope’s. “Only one way to find out. Come on.”

The two women, one like a chocolate candy bar, the other like a stick of butter, proceeded over to Julianna’s cubicle, where the subject of their mission had her nose stuck in an email. Hope once again pondered the ironic difference between the public image a person presented to others and the private demons they dealt with. Certainly, one wouldn’t think Julianna Lee had any demons just from looking at her. Her tan skin glowed, and her straight, mahogany hair fell in sheets down her back. She certainly appeared like nothing was wrong, still wearing her broadcast wardrobe and makeup.

But Hope knew, from having dealt with her own demons, that appearances could be deceptive. She gulped, hesitating. Robin nudged her in the ribs.

Julianna lifted her head. “Someone call my name?”

“Yeah, we did,” Hope said, trying to sound perky. “We’re just wondering what’s got you down in the dumps.”

“How can you tell?” A smirk played on her lips.

“Every time you do this,” Hope said, demonstrating a sigh.

Julie chuckled sadly. “Okay, point taken. I got next week off, just like you guys, but my family is going to be traveling to god knows where without me. So I’m stuck in town, all by myself. And I don’t want to be the third wheel in someone’s plans.”

“Not so fast,” Hope said. “Sam and I were invited to a friend’s wedding. It’s the weekend after the holiday. And you’re welcome to come have dinner at my place. I’m cooking.”

All at once, Julianna Lee rose from her chair, came over to Hope, and flung her arms around her neck, staying like that for a moment.

Then she pulled back. “Thank you. I’ll call you tomorrow about dinner.”

“Okay,” Hope said. “We can talk about the wedding at dinner.”

“What about you?” Julie said to Robin. “Got any holiday plans?”

“Yes. My husband and I will be heading to San Francisco to visit my family. Believe it or not, this will be their first time meeting him.”

“Really? Did you elope or something?”

Robin got a dreamy look of remembrance in her eyes. “No, we didn’t elope. But we did get married in Vegas. It was a very spur-of-the-moment kind of thing. Noah’s mother and sister planned the whole thing in less than two weeks.”

“Wow...” Julie sighed, with her own dreamy expression. Then she shook it off. “Come on, ladies. We’ve got the eleven o’clock broadcast to prepare for. Can’t do that while we’re talking weddings.”

All three of them laughed.