Avery Balthazar is having the worst. Christmas. Ever! Just that morning, she was standing in the corporate headquarters of Balthazar Broadcasting, her stepfather’s mega-media empire situated in downtown Manhattan. But after a brief trip across the country in the company Learjet, she is suddenly standing face to face with her high school crush, Branch Asher. What’s worse, she has the unenviable task of buying out his own mini empire on behalf of her family business, when the only “business” she’s really interested in is getting Branch into bed, once and for all!

Branch Asher is having the best. Christmas. Ever! He’s got his old high school crush, Avery Balthazar, right where he wants her: back in their old hometown of Lakemont, California for three whole days until she gives her pitch to buy his company, which he’s in no hurry to sell. The only thing Branch is in a hurry to do this Christmas, after all, is to tempt Avery into living out a few of his old high school desires, one illicit fantasy at a time! 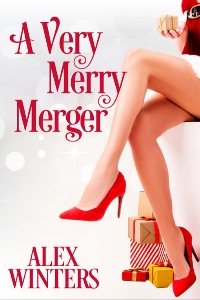 “And just how do you think that went, dear?”

Her sigh was as heavy as her recently embattled heart. “Well, no one quit, Dad, so…there’s that.”

Her stepfather’s voice was low and unmistakably ominous. “They might not have resigned from the organization, dear, but I would wager a significant percentage quit supporting you as a leader just now, Avery.”

She regarded her stepfather, every prematurely silver hair in place to match his world-weary meaningless grin. Inside his exquisitely tailored three-piece suit, Avery knew he was quietly, even patiently, seething. She leaned back against the bamboo wall covering and peered past the man seated at the head of the table to the framed portrait of the same man sitting in the same chair right overhead.

It often struck Avery what a wild, strange ride it had been to become part of this storied, rich, and famous man’s family, and how much she simply didn’t belong in that same chair, her portrait next to his on that same wall.

No matter how much he tried to will it into being.

“Did they ever?” She huffed, aching to kick off her heels and have a massive mango-rita at Salsa Sally’s Mexican Cantina around the corner from Balthazar Broadcasting HQ.

“They might have, dear, if you’d given them half a chance today.”

“It’s curious to me, Father, how you can say that on the very day you made me the head of Themed Eateries and Entertainment.” She waved an arm around the now empty boardroom, practically seething and contemptuous only minutes earlier. “I mean, wasn’t that what today’s little meeting was all about? To introduce me and put to bed all the rumors?”

Archibald Marigold Balthazar, founder and CEO of Balthazar Broadcasting, gave her a wry, humorless grin. “I thought that’s what I was doing, dear. After all, it’s tradition to give the boss’s son a promotion upon graduation.” His eyes scoured her curiously. Never one to wear his emotions on his sleeve, her adoptive father constantly kept her on guard. She wondered, idly, if that was his intent. “Or, in this case, the boss’s daughter.”

“Stepdaughter,” she reminded him for perhaps the millionth time.

“That’s…not how I think of you, Avery. Nor has it ever been.”

“Nor I, you, Archibald. But it’s what all those other department heads in that meeting just now think, and we have to face facts someday.”

“That very few of them want me to be your successor as much as, say, they might have, had you sired an actual son.”

“But I didn’t, dear. I have you, Avery. And you are the person I put in charge of this company’s latest division. Period.”

Avery nodded, her half-smile fixed despite the raging tension headache roaring behind her ears. “And as such, Father, I merely held my ground while the head of every other division in your company second-guessed, groaned, and disparaged every other word of my plans for the next quarter.”

The old man nodded. “Perhaps that’s because your plans were so…esoteric.”

“Can you blame me, Dad? I mean, Themed Eateries and Entertainment? What even is that?”

He gave her a wry, unaccustomed smile. He was, as ever, clearly enjoying her obvious displeasure. “Why, it’s a brand-new division, dear, one designed to tie all of our other divisions—radio, TV, filmed entertainment, internet, podcasts, social media—together through, well…Themed Eateries and Entertainment.”

She threw up her hands. “No one knows what that is, Dad.”

“And they won’t, dear. At least, not until you show them the way. That’s why I handed it to you, Avery. That’s why, in essence, I created it for you. I want you to guide this company into the future, if you so desire. And to do that, you will have to learn what it’s like to stand on your own two feet, no matter what your rivals may throw in your face.”

“By guiding an empty division with nothing to fill it? No wonder the whole room was snickering behind my back today, Dad. Or, in many cases, straight to my face.”

His eyes grew severe again, a clear signal she was veering off track and he was eager for her to rein herself in. “They were snickering because you showed no clear guidance, dear. That’s what they were looking for from you today.”

“It wouldn’t have killed you to stick up for me, Dad,” she said, relenting and unbuttoning the muted gray jacket of her new pantsuit, bought special for what Archibald kept referring to as her coronation day.

He nodded almost imperceptibly. “No, but it would have killed whatever legitimacy you might have gained for yourself up there today. Remember, Avery, this new division of Balthazar Broadcasting will sink or swim depending on you and you alone.”

Her throat tightened with the sudden mantle of responsibility. “So you remind me every other minute since I graduated last week, Dad.”

Avery’s father stood slowly and turned his back to her. She would have taken it personally had she not known that the cabinet behind his seat was where the old man hid his private stash. She was relieved when she heard the clink of telltale ice cubes hit the bottom of two rocks glasses, and not just his own. Four quick gurgles and he turned, offering an olive branch in the form of 40-year-old barreled bourbon from their private distillery nestled deep in the Kentucky foothills.