After the Snow Melts

Rich, popular, and gorgeous Bryan DeChamps pines from afar for his best friend. He loathes the idea of helping Elliot score a date for the snow dance. With his time running out, Bryan must find a way to capture his buddy’s attention—and that means boldly leaving an anonymous card in his main man’s locker.

Grateful for Bryan’s friendship ever since he moved from his Ojibway community to Thunder Bay to attend high school, Elliot Wasacase can’t disclose his true feelings, or he’ll lose the one true friend he has. Upon discovering an unsigned card in his locker from an admiring dude, he’s terrified someone knows his secret but suspects the person might be Bryan.

When Bryan’s car breaks down, stranding them on top of the mountain during a snowstorm, the two must either take a leap of faith or let fear and clashing beliefs cost them what they truly desire. 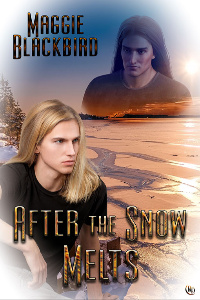 After the Snow Melts

Someone’s stare was burning into Elliott’s backside again. If he turned in his desk, he’d catch Raquel firing him the look, as she’d done ever since the Christmas break. Why one of the hottest babes in school was eyeballing him went over his head, just like the trigonometry lecture Mr. Luck was finishing up, thank fuck.

It was now a matter of choice. Try to unscramble the lecture in his brain or dissect—as he’d done to the moth in biology last class—the reason for Raquel’s constant attention. Someone had probably dared her to give the boggan five seconds of her precious time. She probably had some coin placed on a bet.

Sure, the girls back at Elliot’s home reserve dug him, but they were Indians, too. If not for his main man, he would’ve ended up in the dreaded outcast clique. And they weren’t even a clique. A bunch of friends by default because no one else wanted to chill with them.

Elliot gathered up his books. The five-minute break. He’d meet Bryan at their usual spot for a quick smoke.

Halfway into the hall, Elliot stopped. He glanced over his shoulder. If she dared to trash him in front of everyone… “Yeah?”

“Are you going to the dance?” Her brown hair cascaded in the latest spiral perm down her shoulders. She’d teased her bangs in the newest sexy up-and-to-the-side, and it skimmed one perfectly plucked brow.

Some of Elliot’s classmates moved past him. A couple of them lingered, checking their books. Losers. They were looking to get a scoop, and it sure wasn’t ice cream they were sniffing for.

“You should ask someone…” Raquel licked her glossy pink lips, elbowed her friend while smiling, and sashayed away, giving her ass molded in tight jeans a wiggle. She stole another peek his way and then vanished into the mob of students.

Now that had come out of nowhere. Elliot swiveled on his boot and hurried down the hall.

As awesome as the unexpected attention from Raquel was, if only Bryan had dropped such a clue instead. But he wouldn’t, because Bryan Deschamps—Mr. Popularity, Mr. Wicked Hot, Mr. Rich, and most important, Elliot’s best friend—was a dude. He was clueless about those who possessed two spirits. Nobody in Thunder Bay or anywhere else on Turtle Island, aka North America, had a clue. Only Elliot’s people did.

As he blazed down the stairs, an ocean of loneliness flooded his aching heart—longing for home, yearning for Rufus who always told the old stories. The elder even shared his tobacco and had let Elliot smoke from the scared pipe.

By now he should’ve gotten used to the city, the traffic, the sneers and jeers after one full semester here, since the high school back at the rez only went to grade ten. Some kids made the move, while others dropped out, refusing to leave behind the lakes, the forests, the magnificent sunsets, the hunts, the wild rice harvest—all those great things that made their home a home.

But Rufus had insisted Elliot get a better education, stating he was intelligent and should enroll in university. To qualify meant taking advanced classes. Elliot’s sisters and brothers had refused to leave the reserve. As the youngest, he was the family’s last hope.

When he bumped his hip on one of the double doors to throw it open, March’s chill nipped at Elliot’s exposed skin. Frostier than a snowman. He rubbed his gloved hands together. His leather jacket and sweatshirt weren’t going to keep the nipping wind from icing his skin. At least he had on long underwear, and they looked cool—a black pair exposed by the self-inflicted shreds he’d made to his jeans.

Bryan lips clamped around the smoke were almost the shade of poppy red from Biboon’s nasty weather the spirit of winter was raining on the northwest of Ontario. His gelled blond waves whipped about.

“Where you been?” Bryan stamped his feet and kept sucking on what everyone called a dart.

Elliot shook a cigarette from the packet. “I….” Ah hell, he couldn’t resist. Every guy had a right to brag. Plus, his news could earn him major props. Maybe Bryan’s buddies might start showing Elliot respect, instead of grudgingly tolerating him. “Raquel chatted me up.”

“I’m serious.” Elliot fumbled to light his dart without having to remove his gloves. “She stopped me after class.”

“Stopped you about what? Here.” Bryan handed over his smoke.

When Elliot’s gloved hand touched Bryan’s, the same feeling of sinking into frozen waters chugged through his veins. He had to get a grip. If Bryan peeked inside his brain, he’d give Elliot a beat down.

He stuck the tip against his smoke and puffed. “Here…” He made sure to hold the end toward Bryan so there’d be no more touching.

“Stopped you about what?” Annoyance heated Bryan’s question like the embers of their glowing-red cigarettes.

Surprise sent Elliot a step back. What the hell had he done to send his best bud into Terminator mode? If anything, Bryan should have been stoked Elliot was finally fitting in. “She asked me if I was going to the dance.”

Heat flooded Elliot’s face. He took a drag. While replying, he let the smoke leave his mouth. “I told her I wasn’t sure.”

“She told me I should ask someone.” Well, it was cold. Elliot could use more heat on his face, so he might as well accept that he was probably blushing.

“She uh…” Elliot licked his lips. “She…walked away…but she kept looking at me. D-do you think… Uh…y’know, do you think she wants me to ask her?”