All Cats Are Beautiful (LGBTQ)

Above, us, in the dark shadows of the outer solar system, there is the shape of something unknown, something unspeakable. It waits, it bides its time, and as the days of summer grow longer, so does its voice grow louder.

On the quiet island of Sarah Ann in the Pacific Ocean, home of the renowned Firmament Foundation, awkward teenager Eirian Calohan has come in search of the mystery of their father's recent demise. Instead, they are confronted with the stark contrast between languid life on the tiny island and an unspeakable cosmic horror.

Together with their new friends, they set out to unravel the truth surrounding the death of their father and to also uncover just what it is that the Foundation has reached out to in the dark eternal night of the distant void. 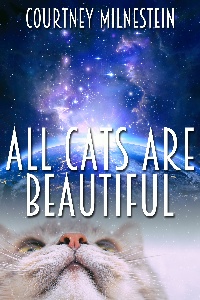 All Cats Are Beautiful (LGBTQ)

Curled up around his own tail, the creature opened one eye, viewed the child standing before him, and then slowly closed his eye again, drawing up a wing of dappled feathers to hide his face and thus avoid further interruption of his slumber.

Fourteen years old, their unkempt brown hair peeking from beneath the brim of their straw hat, Eirian stood with hands on hips in their cabin aboard the great cruise liner, watching the magcat as the beast remained immovable atop a pile of laundry, and waited for some sign, as unlikely as that might have been.

They sighed, blowing a strand of hair from their right eye and resolved to try once again.

"Having trouble with your homunculus?" a voice asked from the doorway.

They flinched. Not even off the boat and they were already having trouble. Preparing a broad smile, they turned and found themself confronted by a girl roughly the same age as them, maybe a year or two older, dressed in denim dungarees cut off high above the knee and white Converse baseball boots, her long hair tied up in loose bunches, dyed the colour of Parma Violets, the kind of hair that looked as if it might smell of sugar and syrup and soap, Eirian thought.

"Hey," the girl smiled, thrusting out a hand in greeting, "I'm Mauve, nice to meet you."

Eirian nodded slowly, the hand hovering between them for a moment, as, with a blush, they realised they were expected to shake it, and, tentatively, made an effort do so.

Mauve's grasp was warm and friendly.

"My name's Eirian," they offered weakly. "Nice to meet you too."

In truth, they had always been uncomfortable around girls, uncertain of what they wanted from them, and what, in turn, girls often seemed to want from them. Fourteen years old, and never kissed, Eirian felt a deep sense of awkwardness at the sudden arrival of this girl, and a faint sense of embarrassment at their lack of motivational skills when it came to the magcat slumbering on the laundry.

As if sensing Eirian's chain of thought, Mauve glanced over their shoulder again at the winged homunculi and smiled warmly.

"You know, I've got a pretty good reputation when it comes to these little guys, if you like, I can help you get him up and moving."

With a wink, she reached into her pocket and drew out a narrow summoning card, the sigil of an unfamiliar homunculus decorating its surface in thin ink and neat brushstrokes.

"Oh. Oh, no, you're fine, honestly." Eirian smiled weakly. "He just, well, he gets like this sometimes. I'm sure he'll move when he's ready."

Still standing in the doorway, the girl with the violet hair raised a dark eyebrow.

"You're sure?" she asked, looking over Eirian's shoulder again at the general untidiness of the room. "Aren't you supposed to be disembarking right now?"

The girl turned the card over in her hand.

Eirian offered her a worried look, and tried to find a way to express the fact that they found the situation uncomfortable and embarrassing and didn't really want any help, but, whatever it was about the smile, the girl clearly interpreted it as conformation that her assistance was required.

Again, she turned the card about, and lifted her left wrist up, revealing the wooden box bound by boramtez leaf and plastic, pulling the card through a narrow slot in the far side of the box with a flick of her wrist, its shape dissipating in a shower of light between her fingers as she did so.

The light coalesced into the shape of a slender homunculi a head shorter than her summoner, long white hair coarse like the wool of sheep, flesh the colour of ripe, red apples, almost human save for the curling ram's horns that rose up from her temples.

Eirian let out a short gasp, surprised by the shape of the creature, having never seen a homunculus her like before, and not quite knowing how to respond to her, to the obvious womanhood of her shape, her small breasts, the lips of her vagina, her sullen yellow eyes as her gaze met their own and she seemed to understand what it meant for the child to have been staring at her nakedness.

Blushing, they hastily took a step back, walking into the dresser upon which their laundry was stacked, which, in turn, the magcat presided over. With contempt, the animal leapt up from where it had previously slumbered, hissing aggressively, and jumping down to the bed, pausing to sit and lick his front paws whilst gazing malevolently at Eirian.

"Hah, seems like you didn't need my help after all," Mauve beamed.

Eirian nodded, still blushing, feeling themself at the centre of attention of both homunculi.

"I've never seen an epimeliad before," they murmured.

"They're dryad class, you see a lot of them out here as there was an accident a few years back and one got loose from Firmament, now they're pretty much a part of the ecosystem." She reached out and ruffled the creature's woollen hair, gaining a look of displeasure for such affection. "This one's called Penelope, or at least that's what I call her."

Again, she ruffled the creature's hair, and then flicked her wrist, seemingly pulling the creature out of existence in a shower of light and back into the shape of a card, which she proceeded to stuff into her pocket again.

"Come on, I'll help you get packed so you and your magcat can get off this boat."

"W-Why are you doing this?" Eirian stammered.

Still smiling, she looked up at them.

"My dad's the captain of this ship," she answered, "and he hates stragglers."