Amber from marketing. Everybody knows someone like her. She's the gal who's always smiling and upbeat. The one organizing the company canned food drive or spending her time volunteering with the kitties at the local animal shelter. She's a bundle of boundless energy from sources unknown.

That's how coworker Dani sees her, anyway. But when Dani is roped into one of Amber's volunteer outings, she gets to know the kindhearted person behind the constant smile. And as their affection begins to blossom, she gets a peek at the true source of Amber's boundless energy.

Follow Dani and Amber on a wild rollercoaster ride that will have you laughing one minute and crying the next. Dive into this collection of five tales and find out the unique circumstances that make Amber so energetic and the way love prevails. 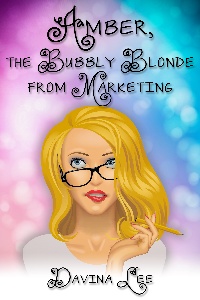 Amber had finished inhaling her first muffin and was now spreading a large painter's tarp on my living room floor.

"Um, Amber? Don't worry about the holes in the ceiling. I'll get to them later."

"Oh, it's not for your ceiling, Dani, but that is nice of you to volunteer."

Amber was busy dragging out another tarp -- no, a canvas -- and little quart-sized plastic bottles of paint. From where, I didn't see. It looked like mostly bright colors. She was dissecting and inhaling bits of another muffin with each trip she made between the kitchen and living room.

I really hoped she wasn't planning any of that paint for my ceiling. And where the hell did this canvas come from? One overnight bag. I swear that's all she brought.

"Amber, it's okay. I've got the ceiling thing under control. Really. I even have some of the original paint. The contractor left it just in case --"

"Dani, Dani, Dani. This is nothing as pedestrian as home improvement I'm undertaking here." She had a look in her eye I had never seen. "This is art."

Naked Amber -- a sight that I'm generally very happy to be seeing -- opened one of the paint containers and poured it over her bare chest. I watched paint running down her throat, over the swell of her breasts, coating her nipples. Oh, hey that's nice. Wow, Amber's nipples in bright red acrylic latex. A girl could get used to something like -- No!

"Amber ..." I stood with my mouth open, not really knowing what I was going to say.

"It's art, Dani. Don't try to understand it, just embrace it."

Amber certainly embraced it. She opened two more containers of paint and poured one over her chest starting at her left shoulder and the other starting at her right. Then a fourth container came out. Oh, she's using a quaternary color scheme, that's going to look really nice. No!

"Amber." I walked two steps toward her and stopped.

She was down on all fours now, hanging her head and crawling over the canvas, dripping as she went. She lowered herself and began performing what I can only describe as an Olympic synchronized swimming event, but with only one person present, and no pool.

"Don't try to understand it, Dani. Just embrace it."

"Dani, if you're hangry, have a muffin. That's what they're for." The synchronized swimming, in all its quaternary glory, continued on my living room floor.

Amber scooted and shimmied over the canvas, her back arching as she explored her folds. "Could be longer, though," she said. "You can't rush art. You have to embrace… embrace ... oh, gawd ... embrace it, Dani. Yes, embrace it."

My paint covered girlfriend brought herself to climax right there on my living room floor in coordinated four color glory. I'm not sure if I should be turned on or furious. I checked my shorts. Nothing. Furious it is then.

"Have a muffin if you're hangry, Dani. You can't rush art."

I had a muffin. And another, while Amber hit the shower. I thought about joining her in there, but honestly, I was a little afraid of who I might find. Alien sexbot? Something more sinister?

I needn't have worried. When she emerged from my bathroom, my girlfriend was back. No quaternary color scheme, just skin. And what beautiful skin she had.

"Hi, Dani," she said, with that coy smile the only thing painted over her lips, the one I had come to know and love. "Are you ready to make love to me again? Last night was amazing by the way." She touched her finger to the bridge of my nose and dragged it down, finally using it to pull on my lower lip.

"You were amazing." she stood on her toes and nipped at my protruding bottom lip with her teeth while she toweled her hair.

How can I say no to that? I can't. Not girl next door Amber, the bubbly blonde from marketing. I'm pretty sure nobody says no to Amber.