Anne and the Lilac Ladies Spectacular

The Delmsford chapter of the Lilac Ladies had taken Anne Hathaway into their club, but trouble was looming. A bad review from a food critic could end them, so Anne approached Raffety Kettle to plead the Ladies’ case. That unfortunate idea started a landslide that threatened to bury the Ladies, but they were up to the challenge. Reinvention! Baking. Home hints. Christmas carols. A rocking chair and vintage rose brocade. Butter and plant-based spreads and a brand-new book. With Anne at the helm, the Ladies hoped their Lilac Ladies Spectacular would revitalise the club—if only they could pull it off. 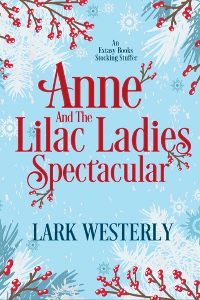 Anne and the Lilac Ladies Spectacular

Anne Hathaway was not married to a man named William. She did not have children named Susannah, Hamnet, and Judith. Her father was not named Richard…as far as she knew. She had never been within 17,000 kilometres of Stratford-upon-Avon. She was no relation to Shakespeare.

Anne Hathaway was not a Hollywood actor. The only play she’d ever been in was a Nativity play. She’d been an olive skinned, dark-eyed Mary with a heaven-blue robe peeping from an undyed cheesecloth wrapper.

Her Joseph, wearing a striped nightshirt and a cottonwool beard dyed brown with strong coffee and attached with loops over his ears, had almost missed the Magi visit while in pursuit of an over-active lamb. Melchior, portrayed by James Watt, had caught the lamb and got the scene back on track.

Looking back through the rose-coloured glasses of nineteen years, Anne realised a lot of ingenuity had gone into that production. Alas, much ingenuity had also gone into naming babies who washed up on the shores of the Mother Mary Christmas Children’s Home.

Anne had a lifelong grudge against the individual with the literary bent who named her using Babes and Bitches in the Background, a puckish spin on a dictionary of biography. Mumsa wouldn’t tell her who it was—just that it wasn’t her.

That pairing must have pleased conspiracy theorists who read the Christmas concert program.

Anne’s best friends at the home were Catherine Parr and Nancy Hanks, who played the innkeeper and Miriam, the lady who milked the cow. It was a real cow, from the Mother Mary Farm. The angel was played by Edward Jenner, and the Star carried aloft by John Keats and Elizabeth Barrett.

Psychologists, including the grown-up Nancy Hanks, might frown, but Anne enjoyed that two-decade-old memory. The Mother Mary Christmas Home did its best, even providing multiple fridges with multiple magnets to house multiple drawings brought home from school.

Mumsa was in charge of one cottage. Others were overseen by Mamama, Popsal, and Pa. They were nice people…flawed, sometimes cranky, but big-hearted.

The Mother Mary kids were cared for, disciplined, praised, and encouraged to develop a broad range of skills…and special aptitudes. Much was made of the aps, the inborn bents that came from who-knew-where.

Anne’s ap was housewifery. She knew Mumsa thought that unfortunate. She’d overheard her telling Mamama that our Anne should have been born seventy years ago. She’d have flourished. Mumsa never said this to Anne. She helped Anne with her cross stitch, baking, cutting paper patterns, flower arranging, and menus. Later, Mumsa endured the smell of glue as Anne practised upholstery and decoupage.

In Careers Week, Anne unwisely mentioned her plans. Somehow, her choice of running a home had been force-fed with ambition until the modest violet hope bloomed like a monstrous tiger lily into the stated desire to run a chain of upmarket motels.

Mumsa frowned slightly. “You can, but these days…” She shrugged. “Anne, you are the one who has to live your life, so choose to live it the way that suits you.”

“Be true to myself?”

“Yes, but Anne—don’t be surprised if other people try to push you up.”

Mumsa gave Anne a kiss on the cheek and rumpled her hair.

Anne went out into the sunshine and tapped Emily Dickinson on the shoulder. “Your turn for the careers talk deconstruction.”

Emily raised a thumb and bounced into Mumsa’s office with an essay stating that Emily wanted to be an engineer. In her case, it was true.

Anne shuffled off to make crepe paper pompoms for the Christmas tree.