Ed Sawyer, seventeen, is one of those ignored types at his school. A nerd hopelessly obsessed with all things cinematic, he lives for his next flick. He’s matched by Linda Usher, a classmate who is also into movies, as well as computer coding and hacking.

On the last day of school before summer vacation, Ed is given a flash drive by a dying man. He sees a code on it, and Linda, for all her genius, can’t decipher it, either. They are soon pursued by not only domestic terrorists—ex-members of the Department of Defense—but also by Russian agents who are after the same thing.

It seems that the creator of the program, Harry Haskins, devised it as the ultimate smart bomb, the ultimate tool for controlling the internet and every single computer program around, including those of defense.

It’s a secret that the wrong people will kill for, and Ed and Linda have to go on the run from those who would capture and kill them—and that includes citizens as well!

Only Linda has the knowledge to prevent such a catastrophe from happening. The only question is whether the duo can remain alive long enough to deliver the goods to the right people. 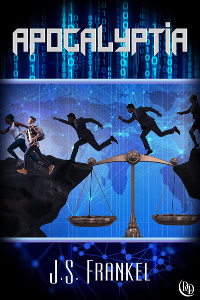 Two important words from our homeroom teacher—since this was the last day of school before summer vacation, everyone stopped talking about their plans and became all ears.

Mr. Randolph—our leader and the teacher who’d put up with countless amounts of crap we tossed at him during the year—nodded his head at the response.

“I’m going to call you up one by one so that you can look at your final grades. Thank you for handing in your assignments, and enjoy your summer vacation…those of you not attending summer courses, that is.”

The room was so silent and still that a person could hear a pin drop. He could have been announcing the impending beheading of someone who’d betrayed the side of the righteous. Grades meant everything, at least as far as I was concerned.

He’d also mentioned summer. Summer—a six-letter word meaning freedom, which was a seven-letter word. That season had always been my favorite, simply because there were no responsibilities, save reading the English literature novels for the fall semester.

Perhaps because it was the last official day of school, Mr. Randolph felt that he had to toss in that crack about attending summer school.

Ordinarily, he was a quiet, taciturn middle-aged man who taught American History and showed little in the way of emotion.

However, when he spoke, people listened, and a glance around the classroom showed me the impact of his words. It always went two distinct ways.

Way number one—students who’d studied hard and achieved decent grades and who’d also been spared the ignominy of studying and missing their summer fun, they would hold their heads high, so high in fact, that their noses practically touched the ceiling.

Way number two—those who hadn’t studied and those who’d failed a subject or five, and they would have no choice but to attend summer school. I’d seen this pattern many times before. When those unlucky few saw their grades, their heads would hang down, beaten and defeated. Screw summer vacation. Our classmates had already given them a nickname—the ultimate doomed.

Matt Snowden, my seatmate, tapped me on the shoulder, gave everyone the once-over, and he whispered, “Ed, you alive or dead on this one? You don’t seem like a candidate for the ultimate doomed.”

He always said that after a mid-term test or the finals. Matt was a funny guy, one of the few semi-friends I had in high school. He lived about fifteen minutes away from me, and sometimes he invited me over to play the latest games he had. I wasn’t a gamer, but it did give me a connection to society, something I’d never really worked on.

It wasn’t as though I went out of my way to stay out of social relationships. Not in the slightest. It was just that I was what one would call socially inept.

All right, confession time. I was a nerd. I lived for my movies. I loved all kinds, ranging from the silent movies to the early gangster flicks to the modern-day, zappity-pow superhero CGI fests.

I also lived for books, didn’t care about meeting others, was too blunt at times, and had zero close pals to share things with.

People talked about Asperger’s, and maybe I had it. I wasn’t sure. Even the definition of it varied, as it went along a continuum. Some so-called experts said Einstein may have had it. If so, then I was in good company…

Matt’s question brought me back to reality. “I don’t know. Haven’t gotten the marks yet, remember?”

Right. Mr. Randolph, portly, with thinning hair and a pockmarked face, started to call everyone up in alphabetical order. He always wore the same dirty brown suit. Stains and numerous small but noticeable holes in his jacket denoted the extreme age of the material or a lack of care—that—or poverty. Most teachers weren’t rich.

I had no doubt where I’d be this summer. At home, where my books and DVDs and computer were. That was how I’d spent every single summer for the past two years. Before that—that was a different story.

Youth is often wasted on the young, as the saying went. Me, as a kid, sports were cool. I wasn’t great, but I could hold my own. Then came the accident, and that changed everything.

To everyone else, it was a simple bus ride home. Two years ago. Summertime, just after I’d finished watching a movie downtown. The ride home should have been simple, but in my case, it almost meant a one-way ride to oblivion.

Number fifty-three bus waited. I boarded, sat near the window, and we pulled out into traffic. Time to my bus stop—twenty minutes. My mother was making spaghetti that night. “Have a good time at the movies,” she’d said as I went out the door.

Sure, I would. I’d always made it back in time for dinner—always.

Not today, though, as when we crossed an intersection, a garbage truck came out of nowhere and smashed into us at high speed, just in front of where I was sitting. It was like watching a slow-motion video, with me as the impromptu and unwilling star.

I heard screams, felt myself being hurled out of my seat and against the window, felt the shards of broken glass slam into my face, and felt my legs break. In short, I got mashed.

On a larger scale, the impact of the garbage truck meeting the bus caused it to rocket into another lane, and that was when the scene sped up. More thuds of metal meeting metal. More screams. More blood. I remained conscious long enough to hear someone say, “Christ, what a mess!”