Arvin Theridion is a bored house spider who yearns for a more exciting life. Carried forth on the back of a jumping spider named Leander, Arvin explores the outside world. But after a series of terrifying adventures, he longs for his old, comfortable life and the possibility of romance in the eight arms of Weirdith, a female house spider he left behind. 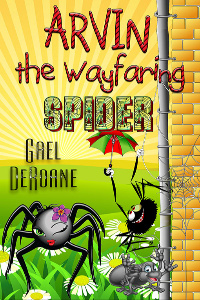 Once there was a spider named Arvin Theridion. His last name referred to his clan, of which he was very proud. Arvin’s childhood had been pleasant, and he wished his dozens of siblings were still around to play with and talk to. Alas, they had all been scattered to the winds, eaten by predators, or clubbed to death by humans with rolled-up newspapers. But Arvin was a lucky spider. The house he lived in had only one human occupant, an elderly man who spent his days reading books and listening to classical music. Arvin occupied a web in the upper corner of a spare room that was cluttered with dusty old magazines and boxes piled against the walls, a perfect habitat for a spider.

His web was well constructed, and a sufficient number of flies and midges found their way into it to keep him fed if a trifle underweight. He didn’t care for the sunlight that streamed through the window during the day, but he endured it without complaint. On occasion, the elderly man came into the room to look for something, but so far had failed to notice the quiet, inoffensive spider hanging in the corner where the wall met the ceiling. Life, therefore, was good.

But Arvin was bored. Although spiders are comfortable with long stretches of solitude, like all living creatures, they sometimes yearn for company. In another corner of the room lived a female spider, and it pleased him to note that she was also a Theridion. But she was a drab thing and not much for conversation.

Scientists are aware that spiders and insects communicate with tiny chirps and buzzes and chitterings. What they don’t know is that in the non-human world, longer, more meaningful conversations occur telepathically. And indeed, Arvin sent many such telepathic messages to his female neighbor. But all he got in return were a few listless comments, which might be summed up by the single word, “Whatever.”

Famished for dialogue, Arvin tried talking with some of the flies who blundered into his web. He had learned Dipterese, the language of flies, a rather harsh buzzing sound, but useful for its large descriptive vocabulary. “Before I eat you,” he said to one of the flies, “can you tell me news from other parts of the house?”

“Why should I?” the fly protested. “You’re going to take my life, which I enjoy very much and would prefer to keep. I have no wish to satisfy your curiosity.”

The fly did not hold still, but vilified Arvin and his forefathers, then kicked his legs to and fro while his wings struggled against the strands of the web. Even after Arvin’s poison dulled the fly’s senses, it continued to curse Arvin and demand release. When the fly’s voice grew slurred and his movements became slower, Arvin drew near. Holding the fly with his pedipalps, he sank his fangs into the fat, juicy body, drinking its essence. After a few minutes, his belly was full, and he stepped back.

But the fly was too groggy to answer, and soon passed into unconsciousness. Arvin wrapped some more threads around the warm body to keep it safe and fresh for future meals. “Funny thing about flies,” he said to himself. “No matter how much they rave and plead, they never tell me their names.”

“Flies don’t have names,” a sudden voice said from behind Arvin’s web. It spoke not in Dipterese, but in Arvin’s own Spiderish. “It’s not part of their culture,” the voice continued. “They’re always moving about, they die after only a few days of life, and there are so many of them that names wouldn’t matter anyway.”

With a start, Arvin turned his body—because his head could not move by itself—to face the intruder. It was another spider, but he had no web! He stood free and unencumbered on the wall a few inches from Arvin. “Who are you?” Arvin asked, his voice cracking with surprise.

“I am Leander Phiddipus, of the Audax clan,” the spider said, bowing. “We are a cheerful lot and much admired for our skill at running and jumping. You may rest at ease, for I mean you no harm.”

Leander gave a merry laugh. “You don’t get around much, do you? It so happens that not all spiders are confined to webs. Quite a number of us roam about as we wish, from one end of a house to another, and outside as well, wherever our whims take us.”

“Outside?” Arvin asked, with astonishment. “But surely, the outside is a place of unending terror and death!”

A ray of sunlight played upon the eight dark eyes of Leander Phiddipus. They gleamed with a brightness that suggested excitement and adventure. Leander was hairy and wore bands of brown and white across his back. His fangs were large and scary, but his manner was so friendly that Arvin was not afraid. He listened carefully as Leander told him the story of the outside world.