Back to Tomorrow (MF)

Librarian Emily Dennison has always loved history, but catapulted into 1889 Tombstone, she finds life far from the idyll she imagined. Meeting Zach Tremaine, a newspaperman from Philadelphia, she gets involved in his quest to rescue his younger sister from her abusive paramour, gambler Jake McEuen. This leads to more adventure than Emily ever thought possible. Eventually she has to confess to Zach that she is from far away, not in distance but in time. Fearful of being torn back to 2000, but missing her modern conveniences, she hardly dares to love him though she aches to.

Zach isn’t quite sure what to make of Emily, so different from any woman he has ever known but so sweet and spunky she wins his admiration and soon his heart. Just when he thinks he has convinced her they belong together, a bolt of lightning tears her away. Or was it Joker Jake McEuen, seeking revenge? Can Zach live long enough to search until he finds her? Can she get back to tomorrow in time to save him from McEuen’s murderous rage? 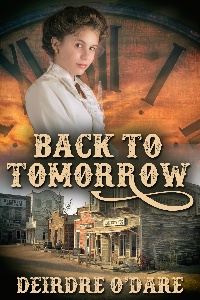 Back to Tomorrow (MF)

“Here, I’ve dished up some stew.” Emily set a plate down in front of him. “We had a little left over. Too bad there’s not a micro ... er ... Angelina and I cooked and served dinner tonight. You’ll have to eat this cold as I don’t think it would reheat too well and the fire is almost out, anyway. Our cooking probably isn’t up to Nellie’s standards, but we tried. At least everyone was fed, and this stew will carry you ’til breakfast.”

She spoke rapidly, changing subjects so fast he could hardly keep up. Well, no matter. He’d try to sort her jumbled words out later. Zach ate, mildly surprised how good cold stew tasted, especially after Emily found a couple of biscuits and one thin slice of the midday’s apple pie.

He ate everything with gusto before he stood, stretched tired and aching muscles, and yawned hugely.

“All I want to do now is sleep for about sixteen hours, but I must check on Mary Ann first. Do you think they’ll let me see her?”

“Goodness only knows. Nellie shooed us out, once the doctor got here. She said we needed to take care of supper, but I think she also believed there’d be sights unfit for young women’s delicate sensibilities. What she considers appropriate for a brother to view, I could not even guess.”

Zach heard more than a trace of acerbity in Emily’s tone, which wasn’t unexpected. She clearly had no patience with being sheltered.

He had to wonder again at her upbringing, though her past was really none of his affair.

“I want to thank you, both for feeding me and for all you’ve done to help Mary Ann. If she pulls through, thanks will be more due to you than to me. Had I only guessed something like this would happen so soon. Maybe I should have, but I was trying to find a route to Benson that would keep us off the public road so I could take her safely to the train. Once that was clear, I was going to get her out of that shanty and ...”

In spite of his best efforts, his voice cracked. He turned quickly away. Better to run off abruptly than have Emily see him close to tears.

In the darkened hallway, he stopped to try to compose himself before going upstairs. The enormity of all that had occurred would not allow him to grow calm.

Mary Ann could have died. She might still die. He wanted to kick something, to howl like a bereaved coyote, to tear Jake McEuen apart joint by joint. But he could do none of those things right now. The frustration ate at his soul.

He didn’t hear Emily approach behind him, didn’t realize he was no longer alone until she put her hand on his arm.

“It’s not your fault, Zach,” she said softly. “There was no way you could know. You were doing the best you could, trying to plan a way to save her. Don’t blame yourself for what happened.”

He turned toward her, raised both hands to her shoulders. He thought he meant to push her away, to tell her to go mind her own business. His nerves were too raw to deal with sympathy at this point, but instead, he responded to another urge, one he’d hardly recognized he had. Instead of pushing her away, he drew her closer, until they stood face-to-face, just short of touching.

In the weak light reflected from the kitchen, her face appeared a pale oval marked by the two dark almonds of her eyes. The scent of spices and home cooking clung to her clothing, but her hair smelled of spring meadows, clover, and wild honey. She was warm and vibrant and very much alive. He bent to find her lips, covering them with his, forgetting all for the moment. He lost himself in the feel and taste and scent of her. Only then did he realize this was something he had wanted to do from the first.

Even when he picked her up in the street, dressed in her urchin’s denim, he’d been tempted to play the fairy tale prince and see if he could kiss her awake. Perhaps now ... he kissed himself into oblivion, but it was no less sweet.