When Natasha "Tasha" Joon accepts an invitation to read from her gender memoir to a feminist bookstore, she thinks it's one of her many stops on her publicity tour organized by her best friend and secret-crush Lydia. As it turns out, the audience that awaits her is far more sinister than she ever thought possible, and Tasha is soon cursed.

Instead of falling into despair, she and Lydia fall in love. Later on, Tasha realizes she has a tumour in her stomach that is rapidly growing. Then appears to move, as if it is a life force all its own. She and Lydia, both trans women, come to the same strange conclusion: Tasha is pregnant and this close to the holidays, it seems that she will be giving birth to the new messiah -- or a monster.

Now, with a possible monster baby on the way, Tasha and Lydia have more things to consider than they thought possible. When the coven shows up again, their supernatural adventure becomes that much more dangerous. Good thing Tanner Chapman, talk show host extra ordinate, can help sort out the matter of paternity once and for all.

Will Tasha's baby be human or demon, devil or angel? And is Lydia the father -- or mother? And who will get custody of the new miracle child: the two trans women who created life in spite of all odds, or the evil coven who only wish to destroy all light during the darkest time of the year? 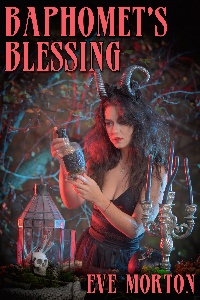 Fifteen minutes later, Tasha was at a bar and Lydia was plying her with alcohol and numerous apologies as Tasha spilled out the strange story.

"I still should have known,” Lydia said. “I mean, it's right there in the damn name. Venus? Of course they're separatists. I should have done better. Researched more. I --"

"Nah, I bet anything put online is all hunky dory and neither one of us would have caught on until we went inside. I doubted it, too. I don’t like thinking that every grandmother could be a TERF, you know? And they’re not. I know they’re not. I’m just ...” Tasha pressed her drink to her mouth with shake hands. “I suppose it was bound to happen sometime. We could only go on so long before the worlds overlapped."

"But this was precisely why you hired me as your PA. A trans person knows these things, while the everyday publicist at the press would just see dollar signs and promo. We see exits where others can't and entrances where others scoff. I should have ..."

Tasha rubbed Lydia's arm. While there was some accuracy to her statement -- trans people definitely did see a different world through their own limitations and experiences -- that was not exactly why she'd hired Lydia. The two had been roommates since they met in university, when they were both still men on the surface, and had discovered their trans-ness together. Fast forward to five years of transitioning together and loving every last private moment together, and suddenly Tasha was approved for surgery through the Canadian government, while Lydia’s application had been rejected. Instead of it breaking up their friendship, it brought them closer. Tasha wrote a book -- finally feeling as if her story was done -- while Lydia became a publicist and PA. At times, Tasha was convinced they were the same person, a double-sided Janus with one of them looking forward and the other one looking back.

But then again, that was probably just her latent feelings of love for Lydia talking, which was made that much easier with all the alcohol around. Tasha downed another mixed drink and put her hand on Lydia's thigh. Lydia glanced at it with a raise eyebrow. Though they were both interested in women, and had lived together for years now, this kind of touching had never happened.

Lydia nodded, but still seemed conflicted. They were both interested in women. That had been the key to understanding their trans identity years ago -- constantly dating women together, but never feeling as if it worked because each one of their dates had wanted a man. When they realized they could be women, and still love women, it was as if a door had opened. Even if some people within the lesbian community often thought they didn't belong, Tasha and Lydia always affirmed one another. Women and lesbians together. Just like Thelma and Louise, except without the cliff ending or Hollywood censorship.

Tasha rubbed her hand from side to side against Lydia's leg. When she leaned in to kiss her, it was soft and quick. Not enough to turn into making out, but enough to signal desire, just in case Lydia was still confused. Lydia's tongue ran along her lips with a smile.

"Of course it takes a spooky bookstore curse for this to happen," she said. “You were always one to react to omens rather than celebrate love.”

“And The Nightmare Before Christmas your favourite film,” Lydia said. She stared wistfully at Tasha, as if envisioning the rest of their lives together -- not as a pink frilly affair, like the rom-coms Lydia loved, but as a Tim Burton black and more black affair, a bit creepy, but still no less lovable. After a laugh, Lydia put her hands over Tasha's on her legs. Whatever had been worked out in her mind was enough. They kissed again, and then again, at the bar.

“Hey,” Lydia said in a low and sultry voice a moment later. “I did book a hotel for this reading, in case we got too drunk to go back home.”

“Yeah.” Lydia bit her lip before she slid off the bar stool. She extended her hand to Tasha and she warmly took it. Hand in hand, they walked to the new room and did what they should have done a long time ago.