They’ve had songs written about them. They’ve been the subject of legend and lore.

Yoko allegedly broke up The Beatles. Pattie dropped George for George’s best friend, Eric Clapton. Olivia beat an intruder senseless and bloody with a lamp stand. The stories are endless.

These women have lived, loved and fallen under the spell of four of the most famous musicians in the history of popular music. They are the wives of the Beatles, nine women who came from somewhere or nowhere and were thrust into the midst of Beatlemania and pop culture history in the most intimate and public way and lived to tell about it.

There have been literally hundreds of books about The Beatles. But Beatle Wives: The Women the Men We Loved Fell in Love With is the story of the women who married The Beatles told from their perspective during and after they said their I do’s. Their memories and insights are straightforward and pull no punches. Within these pages are the good times and the bad, the moments when their love and marriage went off the rails and the moments when these women had it all and lived happily ever after.

“Being a Beatle wife was difficult in the best of times,” relates author Shapiro. “The fans hated them. The media hounded them senseless. They were married to men who did not often treat them with kindness and respect. But they stuck it out, many until they could stand it no longer and many who toughed it out through thick and thin. There were happy endings. Sad endings. Endings that will shock, anger or bring a tear. These women have seen it all. This is their story.” 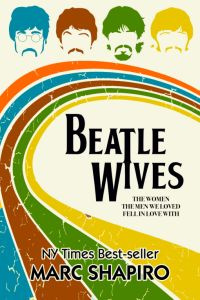