Tamzin’s life is full of new beginnings. Every few years it’s a new town, a new name, and another story to tell. The move when she is seventeen is the worst of all. Along with her name, she loses Dequan Qin and the magical year they were planning after Christmas.

Unable to contact Dequan, Tamzin, now known as Rochelle, accepts a lifeline from a strange elf man. Matin offers a place for her to stay until it’s safe to be Tamzin again. Through the gateway into over there, the newly renamed Thomasine finds love and acceptance in a world of sparkling beauty. Lovers and friends, ever-sailing galleons, music, and magic offer distraction, but she never forgets Dequan. 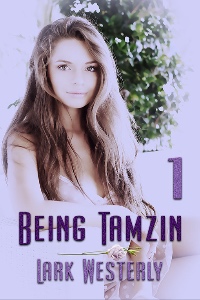 Tamzin loved the Christmas season, but the morning after the row with Ada and Mister Sinister, she woke up with a sick feeling in her stomach.

Usually when she had a bad day, everything seemed better the next morning. That hadn’t worked for Tamzin today. Instead of being better, everything seemed immeasurably worse. Her mind scurried like a rat in a glass box. Everywhere it darted, it came up against a hard wall of denial.

She lay in bed in the room she’d slept in for the past two years. If she’d lived in this house forever, she might have seen remnants of her childhood, with the pony curtains she’d picked when she was nine, or maybe the leadlight lamp she’d found in an all-sorts shop when she was twelve.

Since she’d moved into this room at the advanced age of fifteen-and-a-half, none of the horsiness was represented. Instead, the room was occupied by elves.

Ada thought elves were a symptom of—something or other.

Or maybe, Tamzin thought, they were her daftness showing through the paper-thin veneer of being the seventeen-year-old daughter of Guy Herrick and his partner, Adeline Burns, who had arrived in Sydney a couple of years before. They hadn’t known anyone in the city. No one had known them. That was still mostly the case.

Dequan called Tamzin daft. She loved that about him. He also classified her as elf-obsessed, but that was fine, because Dequan believed in elves. He’d said so on the last official day of school.

“Of course I do.” He gave her his wide smile and spread his arms as if to embrace the school library they were about to enter.

“You do?” She squinted at him in surprise. “Are you humouring me?”

“Um. Why would I? Doesn’t everyone believe in elves?”

Well, no. Ada and Mister Sinister didn’t, for two. They disbelieved so violently that they’d banned all mention of the subject.

Dequan put his arm around Tamzin’s shoulders. She loved that about him, too. He didn’t care who saw him hugging Tamzin, or his kid cousin Lucy, who some people said might be adopted since she looked Chinese and Dequan didn’t. Tamzin knew she wasn’t. Dequan’s dad looked Chinese, and he and Lucy’s mum were brother and sister.

“There are elves right here at Diversity High,” Dequan went on as they seated themselves at one of the study tables.

They’d finished their last exams, but the principal said they had to remain on school premises until bus time.

Or what? We’ll be suspended?

No one had answered that one.

“Why haven’t you ever told me that before?”

“But I’m not interested in Canadians or chewing gum. I don’t paint Canadians,” she persisted.

“I didn’t know you were interested in real elves either, beyond the general elf obsession for elf books, elf films, elf-whatevers. That is, I didn’t know until I saw your bedroom.”

Tamzin flinched. Ada and Mister Sinister had caught Dequan in her bedroom and had made the fuss of the century.

They’d been taking a break from study-buddying, but they’d had all their clothes on.

“Studying one another’s tonsils,” was the way Mister Sinister had put it.

Trust Ada and Mister Sinister to try to ruin something beautiful.

They were usually disengaged parents, but every now and again they’d suddenly become micromanagers with a side helping of inquisitor.

The last time they’d made a big fuss about nothing was when Year Eleven went for a field trip to Fiddler’s Bay to visit the maritime exhibition at Oakengrove, a historic house now run as a high-end guesthouse. After the cultural exposé, they’d had free time to look about the town. Tamzin had gone down to the pebbled beach and walked along to the end of the cove with Dequan.

They’d talked endlessly about music and art and their plans for the future. Dequan had admitted to an eclectic collection of weird stuff his grandmother had given him. Tamzin had confessed to a desire to join Ms Shackleton’s Jam Club. Dequan had said, “Snap!” and added he’d never got the hang of the trombone, but maybe a guitar? It was during that trip that she’d really got to know him. Maybe that was because his shadow, Lucy, wasn’t there, or maybe it was the freedom from timetables and rules.

They’d sat on the shingle, eating oranges, and Tamzin had opened her notebook and started drawing elves.

“What are those?” Dequan had asked.

He’d smiled at her indulgently. “You daft thing, you.”

The bus was late, then one of the girls had a migraine. She stretched out on the back seat, leaving nowhere for Tamzin to sit except in Dequan’s lap.

She’d leaned against him, feeling the familiar but excitingly different outline of someone else’s body against hers.

He tucked his arm around her, keeping her safe.

She’d gone home with her head stuffed full of hope and happiness.

Ada had been waiting, and she’d said, “You’re late, Tamzin. Where have you been?”

“It was the Year Eleven excursion, remember?”

“That was meant to take place in school hours.”

“Bus? Surely you took the train? The Ship Museum’s on the line…just a block or so from Weatherby Station.”

“We didn’t go to the Ship Museum. It was the Maritime Experience.”