After a life of lies and mystery, Thomasine Forest has fled to the fairy realm of over there. She’s been there for four years, living with a mixed community she knows as the clan. Although she enjoys her life with them, she can’t commit to marrying her lover, Cornelius, because she knows she will eventually return to the human realm to resume her life with her human boyfriend, Dequan.

It’s still too soon to return home, so Thomasine embarks on a journey that takes her from the leprechaun village of Balla Cloiche to board the ship Unicorn of the fair wind fleet.

Landing on the Island of Summer brings new adventures with two courtfolk men, as well as the realisation of a long-held ambition to go horse-riding. After leaving Summer, Thomasine experiences a sojourn on a magical island and then, by degrees, she makes her way back to Balla Cloiche. She can go home now, but first, she intends to catch up with her beloved clan. Thomasine knows her life is about to change enormously. For one thing, she won’t be Thomasine anymore. It’s time to leave the fairy realm and resume her life as Tamzin Herrick. 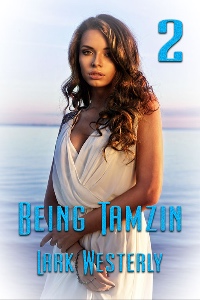 Thomasine Forest, Over There, 2014

Beginning her travels with the fair wind fleet after she left the clan and her lover, Cornelius, turned out to be a bit more difficult than Thomasine Forest had anticipated.

It was four years since she’d fled from an untenable situation with people who cared more for their own peculiar agenda than for their unhappy daughter. That was if they even were her parents. Thomasine wasn’t sure. Who were they, anyway? What were their real names? Who was she? Ever since she could remember, her parents, Ada and Mister Sinister, had been changing their identities every two or three years, cutting ties with everyone from their past. They’d changed her name, too, again and again.

She’d been Angie, and she’d been Abbie. Then, when she was eleven, she’d been called Jade. They’d ripped her away from her first best friend and informed her she was now called Cleo. They’d taken away her belongings and given her new ones. Later, as Tamzin Herrick, she’d been nearing eighteen and about to start a new life with her boyfriend, Dequan. With just weeks to go before she was legally independent, they’d done it again. Her name was now Rochelle Marlowe, and she was stuck in the dead-end town of Macquarie Bay.

A lifeline came from an unexpected source. A young man she’d seen only once before took her back to the city. Matty’s friend Otto led her through the fairy gateway at Dancing Tor to over there. He’d left her to sink or swim in the fay homeland, and she’d swum. How she’d swum! She’d had four years with the mixed community she thought of as the clan.

Two of them had loved her. Shay Beech was now happily married with children, and she trusted Cornelius Myriad had by now wed Briar.

I wish I could have stayed to play the wedding dance for them as I did for Shay and Honoreé.

No. Better to go when I did. Juliette was displeased with me.

Juliette Myriad, Cornelius’ mother, had hoped Thomasine would marry her son and give her a grandchild.

Now, with luck, Briar would do that and with a much better will. Briar would stay with Cornelius and the clan forever. In three more years, Thomasine would be going home.

Her years with the clan had given Thomasine gifts and skills beyond anything she’d ever hoped for. Her magic fiddle sang whenever she played it. Her art case was stuffed with brushes, pigments, and hand-made paper. No longer the helpless girl who’d arrived through the gate and dubbed herself Thomasine, she was now a confident woman. She had skills to make her way to the fair wind fleet to sail with the galleons and see the world for her last three years before it was time to return to Sydney and take up her life with Dequan as Tamzin Herrick.

This was…if she could find the place to meet the fleet.

Everybody she met wished her well in her journey, but few of them had suggestions for where she needed to go.

It was as if the perpetual galleons she sought had semi-mythical status.

Yes, they had heard of the butterfly ships that sailed forever, but no, they had never seen them. Eventually, she realised she was asking the wrong people. Treefolk, with whom she felt familiar, knew of the fleet but, like her kind clan adviser Zeph Maple, they were happy in their own districts.

The courtfolk she encountered were courteous but not inclined to talk to her with more than a cordial greeting. They were beautiful, like folk from a troubadour’s tale, but seeing them made her nervous. Juliette Myriad was courtfolk, and Juliette was displeased with her.

Thomasine avoided the pixies she saw, because she vaguely remembered Otto telling her to stay away from them when he’d brought her through the gate. She didn’t think he’d ever explained why. In fact, he’d explained scarcely anything. There hadn’t been time.

Matty had been kinder. He’d been so sweet, but then, he’d felt guilty. His aunt’s boyfriend had something to do with the mess that was her life. Ada and Mister Sinister cut ties with everyone they knew whenever they changed their names and moved on. Almost everyone. They kept in touch with the man Thomasine knew as Shades. Matty wouldn’t talk about him. He found it too distressing.

Elves seemed the best folk to ask, considering how kind and helpful Mister Herron at Diversity High had always been, and how Matty and Otto had put themselves out to help her, but she didn’t meet any. Over here was as big as the world, and the elves seemed to live far away.

No one she asked had a map to show her, and their disconcerting habit of suddenly stepping out of view and/or out of nowhere didn’t help. She knew they were simply going, as Cornelius’ sister Kate had when they went to the grotto to discuss Thomasine’s future, but knowing what going meant didn’t help her when she couldn’t do it herself.

As Juliette had told her, while they were still friends, cars didn’t work over here. She supposed some folk might have bicycles or horses, but she hadn’t seen any so far.

She wondered if Juliette, who lived so close to the Dancing Tor gateway, ever thought about stepping through to reunite with human friends, or to refresh her memory of cars, telephones, and shopping. It seemed unlikely. Juliette had lived in Sydney for a few years in her teens, but her husband Rain couldn’t pass as human, and Juliette wouldn’t leave him.

I wonder what her parents thought when she married Rain. She did say her great-aunt-by-love was angry. I suppose she’d set up the modelling job and a business future for Juliette and then she saw it all going to waste.