When her parents’ actions parted her from her first love, Dequan, the girl who had once been Tamzin ran away. She couldn’t go home, but an elf man named Matty offered her a passport to a brand-new life in the fairy realm. Renamed as Thomasine, she learned new skills and met new friends and lovers, but she never forgot Dequan.

Seven years on, she’s back in Sydney, ready to be Tamzin again and to take up the reins of the life she left behind. Before she can rekindle her relationship with Dequan, she needs a formal identity. Branok and Gillan St Ives help her out, and so do Dahlia Pengellis and the Dames with Dogs. All these people seem to wish her well in her quest of being Tamzin, but it’s her quest, after all.

Tamzin finally tracks down Dequan, but the reunion does not go as planned. Bruised but unbeaten, Tamzin moves up the coast to Fiddle Bay, where she opens an art studio and reconnects with the indie music scene. Dahlia and her followers turn up, and after a highly peculiar evening, Tamzin meets an old acquaintance who might have some answers. Even if he hasn’t, he has something Tamzin wants. 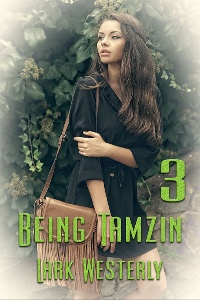 Thomasine drew a deep breath. Stepping through the gateway from the fairy realm and seeing other humans for the first time in more than seven years was a shock.

It was clearly a bigger shock for the startled couple who had witnessed her return. Seeing her was probably surprising enough, but they had also seen her hugging Shay. He wasn’t as green as a full-blooded leprechaun, but he was definitely too green to be human.

At least he’d taken the hint and gone home before anyone else saw him.

She smiled at the couple and said equably, “Sorry about that. I’m an artist, and my friend and I were testing out a pose. We didn’t know anyone was about.”

“That’s obvious.” The woman, who had long dark hair and who was implausibly beautiful, laughed. “You’re a musician as well as an artist,” she said, indicating the fiddle, which was strapped to Thomasine’s back.

“I play the fiddle, and I used to play the guitar. You?”

“Jordy plays the harp and the flute,” the man said. He had a pleasant plain face and broad shoulders. He wore a loose shirt that looked as if it had been made for someone even bigger than he was. It didn’t look the way Thomasine remembered men’s shirts. Presumably, fashions had shifted.

“What about you?” Thomasine asked.

He shrugged. “Keyboard and guitar a bit... I’m not a musician, though.”

“Chess is a music producer,” the woman said with obvious pride. “He owns Indichord Studio.”

Her head was spinning. Dancing Tor on this side of the gates was well away from the city, but the air had traces of fumes she hadn’t smelled since her escape into fairyland. There was no such thing as petrol over there.

“Jordy is one half of Courtesan. Surely, you’ve heard of them? You must have, since you’ve come to Winterwatch. Court Leopold and Jordana Dane?”

“Well, you won’t be suffering vainglory while this lass is around,” the man said to his companion.

Jordana said, “Winterwatch is a bit bigger this year. Maybe she’s come for some of the other bands.”

Winterwatch. Thomasine’s mind did a lurch. She and her boyfriend, Dequan, had once intended to come to the Winterwatch music festival. But that was so long ago.

“Not till tomorrow, but we’re getting set up before the rush comes. We’re third on the program.”

“I haven’t had a chance to look at a program yet.”

She was aware her words were disconnected, but taking up the reins of a life interrupted seven years ago made her feel as if she were walking a mountain path in the dark.

They’ll think I’m simple... and not in a good way.

“I’ll dig one out of the van for you,” Chess said kindly.

Jordana said, “Is your beautiful friend one of the acts? If so, I hope he has some pants, at least.”

“Um—no. Shay was just helping me out with an art project, as I said. Now he’s gone back to his wife.”

“We met when he was nineteen. His dad and I played the fiddle at his wedding. Now he’s twenty-six, and he and his wife have four children.”

“And he forgot his pants.” Jordana’s lovely face twitched into a smile. “Pretty amazing, isn’t he?”

“Yes, I’ve always thought so,” Thomasine agreed. At least she was on solid ground there. Shay Beech, her first lover, half leprechaun and half treefolk and wholly delightful, was pretty amazing.

Chess backed out of the van and held out a folded paper to Thomasine. One side was blank, and she found herself staring at it with avarice.

Blank paper! What I’d have done to have that on Stella Orris...

“Her name’s Tamzin, I think,” Jordana supplied. “At least, that’s what Mister Tumnus called her.” She glanced at Thomasine. “I notice names, because you don’t meet too many people called Jordana... or Tamzin. It’s a Cornish form of Thomasine.”

Thomasine almost laughed at the idea of Shay with an umbrella.

“Darling, I don’t think she needs a dissertation on naming conventions.”