After a turbulent childhood of switched identities and secrecy, Tamzin spent seven years over there, in the fairy realm, before returning to take up the reins of life in the human arena. Returning to her preferred identity of Tamzin Herrick was never going to be easy, but Tamzin achieved it. Established as a freelance artist trading as Elf-Made Art, Tamzin has made friends with the formidable Dames with Dogs, as well as her surrogate family, the St Ives.

Her friend Dahlia “Daylight” Pengellis had a complicated social life, and a portrait sitting at Tamzin’s house at Fiddle Bay led to more complications when Daylight and three men started behaving badly. The arrival of a fourth man was the last straw, but he and Tamzin recognised one another from a meeting years before.

Matin Campania was unfinished business, and after spending time with him, Tamzin felt more equal to facing the fairy infestation in her house.

Having met Matin again, Tamzin was happy to have him in her life, but she was unsure of their exact relationship. Meanwhile, misunderstandings with her friends caused a few more problems, topped off with a meeting with someone else from her more recent past. 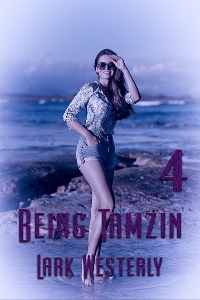 Tamzin Herrick was still glowing from her unexpected and delightful night with Matin in his family cottage over there in the fay homeland. It was a good while since she’d been to bed with anyone. After last spring, when she’d discovered her long-beloved boyfriend, Dequan, had moved on, she’d thought a single and celibate life was all her future offered.

Most of her circle of friends were female, and older than whatever she was. How could she know her age, when her parents had a habit of changing her name, date of birth, and location every two or three years? Then there was Shades, an amiable, sinister, and occasional presence in all her lives.

In her earliest memories, her name had been Angie Blake. After that, she had been Abbie Stevenson, Jade Eliot, then Cleo Browning. She’d lived in a suburban house, a caravan, a flat, and a seaside rental. She’d spent two happy years in Sydney being Tamzin Herrick, cultivating an interest in music and art, and falling in love with Dequan Qin. That idyll ended when she was unwillingly relocated into life as Rochelle Marlowe.

That was when Matin, who was also young and unhappy, and who was also somehow connected with Shades, had offered her a fresh chance at life—over there. He hadn’t joined her, and she’d never seen him again until last night. Her seven-year tenure as Thomasine Forest seemed like a fantasy dream now, and she’d been Tamzin again for nearly a year and a half.

She’d met up with Matin by chance, but she supposed it wasn’t altogether implausible. They were both interested in music, and they both knew members of the fay community. Tamzin was human, as far as she knew, but during her time as Thomasine, she’d had fay lovers, and Matin was an elf.

They’d even lived in the same city for a few months before Tamzin took possession of her house in Fiddle Bay.

Tamzin recognised her one-time rescuer, and she prevailed on him to take her somewhere quiet to debrief. They’d ended up in Matin’s bed in a cottage over here. Tamzin had enjoyed herself immensely, but now they had to get back to the human realm.

Matin needed to drive down to Sydney to his job at Wildwood Studio, and Tamzin had to go back to Fiddle Bay to deal with the aftermath of three fay men and one halfling woman, all of whom she’d left behaving badly in Fiddler’s Rest.

Tamzin had no idea if they would still be there. If they were, she hoped no one and nothing—including her furniture—had suffered irreparable hurt.

“Are you ready, Mistress Tamzin?” Matin asked from the cottage door.

Tamzin wanted to say no and dive back into his bed and have him join her, but she answered, “I’m ready, Master Campania.”

He smiled at her, seeming not to mind that she was dishevelled and wearing last night’s clothes.

Tamzin smiled back. He had tidied himself, and his shaggy brown hair gleamed in the sunlight streaming through the door. He’d filled out and matured over the years since their first meeting, and he looked far happier than he had done then.

Elves didn’t read minds, but many of the fay were perceptive, and Tamzin realised she must have been staring.

“I was thinking how nice and dependable you look, and how much I’d like to have you out of those clothes again.”

“You know I am.” He held out his hand and she took it.

So I’m not only unfinished business to you…

Holding hands over here wasn’t necessarily a romantic or loving gesture. The fay realm had a different approach to location, and two or more fay could go, moving swiftly from one place to another, as long as at least one of them knew the route. Holding hands was a good way to ensure that they arrived in the same place at the same time, and it also enabled trace fay and humans to go, since they couldn’t do it unescorted.

Tamzin walked out between flowering rose bushes, then through a garden gate to the meadow she’d crossed the night before. In daylight, she perceived beds of flowers and vegetables, a couple of outbuildings, fruit trees with small hard apples and newly forming pears, and a brindled cow with a calf at foot.

This is so lovely. I’ve missed my fairyland.

She would have loved to explore, but Matin gave her hand a gentle squeeze. “Ready?”

“I suppose so. Does this cottage have a name?”

“We call it Bellflower Cottage, after the ancestor who lived here first.”

“I like that. Bellflower Cottage at Skyside. What a perfect address.”

“Fiddler’s Rest at Fiddle Bay sounds good too.” He grimaced. “Better than my flat near Wildwood Studio.”

“I never bothered to give it one. I’ve lived there for years, but only for convenience.”

“Maybe you could call it Convenience.”

He stepped forwards, and the meadow blurred around them.

Tamzin wondered how he would be able to locate the gateway. On the human side, it could be reached via an inconvenient shuffle, bending low, under the canted rocky slab in a shallow cave. They had stepped through into the meadow in the dark, and she hadn’t spotted a marker.