Tamzin’s life is full of new beginnings. There’s never any warning, but every few years it’s a new town, a new name, and another story to tell. The move when she is seventeen is the worst of all. Along with her name, she loses Dequan Qin, and the magical year they were planning when they turned eighteen.

Seven years in fairyland took Tamzin away from her misery and brought her a new identity and new loves. Fairy tales end, though, and back in the human realm Tamzin had to reclaim her old identity. With her first love lost to her, and other loves left behind over there, Tamzin meets an old acquaintance and finds new hope and a new certainty. Matin Campania is her world now, but the past has long arms, and despite her efforts to move on, Tamzin is constantly drawn back to the mysteries of her origins. Who is she, really? What was her first identity? 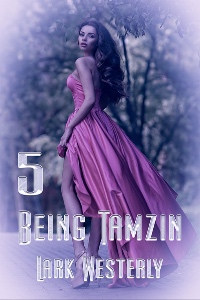 The significance of the date occurred to Tamzin Herrick as she sat brushing her hair in the lamplight.

She supposed her face changed expression, because Matin, lying propped up in the bed behind her, half smiling as he watched her in the mirror, said, “Mistress Tamzin?” on a questioning note.

“Master Campania?” She kept her voice soft, so as not to disturb small Dickon Haydale, whom they were minding at Bellflower Cottage for the night.

Tamzin knew better than to claim it was nothing.

Matin was an elf man, and he was perceptive. She put down the brush and got to her feet, with her unaccustomed cambric nightgown pooling around her ankles. She didn’t usually bother with nightwear when she spent the night with Matin. Whether it was the fairyland cottage over here, her house in Fiddle Bay or, on rare occasions, at his flat near Wildwood Studio, clothing seemed redundant. Since they were hosting his nephew while the child’s parents celebrated their anniversary, she’d thought it more appropriate to cover up.

She bent over the crib where Dickon lay wrapped in an embroidered coverlet against the mild winter chill. He was six months old, and Tamzin thought him quite a charming baby, who giggled far more often than he howled.

“I hope Misty and Lars are having a good time,” she said.

“I’m sure they’re having a loud time,” Matin said dryly.

Tamzin recalled Misty’s comment about sitting on her husband in the pantry among the turnips when the Christmas Hot overcame her. She didn’t think Matin needed to know about that conversation.

Dickon stirred. Tamzin thought he must be aware on some level that he wasn’t with his parents.

Matin got out of bed. Tamzin thought he’d lift the baby to comfort him, but he rested his hand lightly on the child’s head and hummed a dreamy tune.

“What’s that called?” Tamzin asked in a low voice. It sounded so familiar that she could have joined in with a counterpoint melody, but she couldn’t put a name to it.

“It’s an old elf lullaby. Child of my Heart. Misty and Lars sing it to him.”

“And you learned it especially for your uncle duties.” She wasn’t surprised. Matin’s love for his family was one of the things she adored about him.

Matin put his arm around her shoulders. “No, mistress. Mum sang me to sleep with it when I was a tiddler. She sang it for Misty and Olivier, too. Grandmother Bellflower taught it to Mum, and for all I know, it goes back to the mists of antiquity.”

“It must be lovely to have a family lullaby.”

“This one belongs to everyone.” He dropped a kiss on her head. “Surely your parents sang to you when you were a baby?”

“If they were my parents.”

He said, “Whether they were your blood or not, they loved you.”

“Yes. Just not enough to put me first…oh, never mind. That sounds self-centred.”

“I can suck your balls?”

He chuckled. “Maybe not that, tonight. Might wake t’lad.” His mimicry of his brother-by-love’s hob dialect was spot-on.

Tamzin knew better than to protest they could be quiet. She had managed that with her former lover, Cornelius, but that was years ago, and her preference was always to be vocal and enthusiastic. She followed him to the bed, and they got in.

Matin lowered the lamp to a faint glow with a snap of his fingers, and he settled her with her head on his chest. They would not be making love that night, but it had never occurred to Tamzin not to come to the cottage just because they’d be minding a baby. Time spent with Matin was her favourite thing, whatever they were doing, but most especially when she was held in his arms.

“So, what did you remember while you were brushing your hair?” he asked, tucking stray locks of it behind her ear.

“It’s two years today since I came back through the Dancing Tor gateway, and that makes it nine years since Rochelle ran away…nine years since the day we met,” she said. “A third of my life. Nine years since I last saw Ada and Mister Sinister, and still not much closer to finding out what on earth was going on.” She hitched onto her elbow and looked down at him in the dim light.

“Have you asked Master St Ives to help? He found your Dequan for you.”

“He’s not my Dequan, and he wasn’t hiding. Why would he? He was getting on with his life with his girlfriend.”

Who has since left him because, in her words, it wasn’t going anywhere.

Tamzin didn’t say that, and neither did Matin. It was a fact, and they were both aware of it.

“Branok offered to look for my parents when I first met him, but I didn’t want to find them—then.”

“You could tell him you’ve changed your mind.”

“It’s still no. Branok and Gillan have always been kind to me, but you know Bran—he’s a bloodhound. He’d nose about, and all sorts of things might come to light. Then he might feel he had to do something about it. Something official.”

Something that might put the chameleonic, eccentric, and highly adaptable Ada and Mister Sinister in cells.

“He’s a solicitor. Doesn’t he have a duty to his calling?”

Tamzin knew elves and piskies didn’t always get along, not from spite, but because they had such different frames of reference. Elves were, in Gillan St Ives’ terms, lovely folk, whereas piskies looked for angles as naturally as they breathed. They invariably found them.