Christmas 2009 was one of the worst times in Tamzin’s life as she was torn away from her delightful future with her boyfriend, Dequan, by her parents’ machinations. Living unhappily under a new identity, Tamzin ran away to fairy land—literally.

Ten years passed and Tamzin was back in New South Wales. Christmas 2018 was unfulfilling, spent with her friends Gillan and Branok St Ives when she longed to be with her new love, Matin.

Christmas 2019 brings its own challenges, but at last Tamzin is exactly where she wants to be. Life is good, personally, professionally and socially. Life would be almost perfect if it weren’t for the lingering shadows of her past.

Tamzin is living quite close to where she was in 2009, but it isn’t the city of Sydney that holds the answers she feels on the tip of her tongue. A birthday trip to a gallery opening in Adelaide seems an unlikely catalyst, but it’s there at Gallery Spenser that Tamzin faces her memories head on. Finally she learns the truth about the identity switches of her early years, but the question remains—why? Only three people know the answer, but will they be willing to talk? 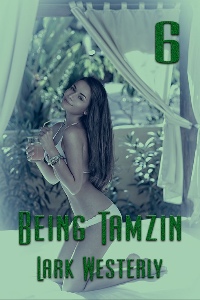 Tamzin lay in a bed stuffed with springyweed and the rustling dry seaweed known as seadown. She was exhausted, with a deep weariness that came from no more than two hours of intermittent sleep, a great deal of exercise, and considerable emotional investment. She raised her arms above her head and watched the light from the rising sun gild her skin and flash shards of colour from the betrothal ring she wore on her right hand.

“Yes please!” Too tired to support the strain, she let her arms flop to her sides.

She felt the bed rock slightly as Matin got in beside her.

“Do you need to go again?” she asked.

For answer, he took her hand in both of his and brought it down to his groin.

She palpated the warm, heavy mass between his thighs and sighed. “That’s a no, then.”

“Definitely a no,” Matin said.

Tamzin closed her fingers in a caressing movement and pouted. “Does that mean I don’t get a Christmas rogering?”

“Do you want one? I doubt if I can rise to the occasion, yet, but I can always help you out somehow.” He made a move to sit up.

“No, thank you,” she said, laughing. “I’ve been helped comprehensively for hours on end. I hope we didn’t scare the gulls.”

“So do I.” He settled again, stroking her hand where she still held him. “Are you…” He trailed off, and she heard him swallow.

“I expect you are too,” she said fairly. “It was you who had to keep powering on. I could have chosen to just lie there and work out logic puzzles.”

She tickled his balls. “Where’s the fun in that?”

“While I was trying to pleasure myself and failing.”

She moved one hand provocatively, stroking and pulling gently. “Is that a twitch I feel, Master Campania?”

“It is! It’s a twitch. He’s doing his best to stand to attention.”

“I thought you were tired.”

“I’m so tired I can’t think straight. And my throat has a tickle.” She coughed.

“That’s from all the squealing you were doing in the night. Drink your tea.”

“I remember you roaring a fair bit too.”

“Probably when you tried to swallow my cock while wringing my balls like a teabag.”

“Well…I certainly hope it was you.”

She got up on one elbow and picked up the teacup he had set on the wooden sea chest beside the bed. She drank the tea thirstily, then she set it aside and curled down against him.

“Do you want breakfast?” he asked.

“Not yet. I just want to snuggle with you.”

If he made any answer, Tamzin didn’t hear it. She was asleep.

When she woke again, the sun was slanting through at a different angle, and she was hungry. She sat up, pushing her hair away from her face.

Matin stood at the window, looking out across the water. He had dressed in a hip-length tunic, three-quarter pants and soft shoes, standard wear for fay men who weren’t somewhere they needed to pass as human.

“Hmm?” She made a questioning sound and noticed with pleasure that a fresh mug of tea and a plate of bread and honey awaited her attentions.

Her betrothed turned to smile at her. “I thought we might have a look around the island, if you feel up to it.”

“I will once I get this down me.” She still felt wrung out, but she was determined not to show any weakness. If Matin had spent the night with an elf maid instead of the all-too-human Tamzin, they would probably be out rock-hopping already.

“Has the Hot really gone off now?” she asked.

He hesitated. “It’s not just like snapping a switch, but it’s down to a gentle simmer. This was the nicest one I ever spent.”

“Really. Last year was by far the worst, but mostly it’s a case of debriefing various partners and making awkward farewells, before going away alone and trying to make sense of it all.”

“I wonder how Olivier managed,” she said.

“Well, he’s—what, twenty? And Nessa said she wasn’t going to bed him for a while, if ever. He’s so fond of her, though, so how would he feel about bedding someone else, or lots of someones, when he was just longing to be with her?”

“He couldn’t exactly tell her how much he wanted her, either, because that would look like blackmail. Maybe he took care of it himself.”

“After my experience last year, I wouldn’t wish that on anyone, let alone my little brother.”

She shied away from the painful thought, but she couldn’t quite leave it alone. “Matin, why do elves get the Hot?”

“I don’t think anyone has ever figured that out, for sure.”

He seemed to consider that. Then he said, “No. I can’t speak for others, but I wouldn’t. It’s a part of who and what I am. And when it’s working the way it should, with a willing lover who is there for me today and forever, then it’s marvellous.”

“Even when you’re roaring.”

He gave her a quick grin. “Especially then. It’s pure release. I feel like a shooting star.“

Tamzin sighed and decided to change the subject. “I wonder how Fou is.”

“Being overindulged with pisky delicacies, I expect,” Matin said, flipping from the intensely personal to the objective without a blink.