Tamzin has found some answers to her strange and complicated life. Confronting her parents, the architects of her problems, was never going to be easy, but she has finally cornered them in a cafe. The answers, when they come, are shocking, but Tamzin can now move on with her life, marry Matin Campania, and work with him on a new and challenging venture.

Meanwhile, Nelis Winter and Xavier Partridge are also getting married after a year of romance and planning. Things are going their way, but they can’t give their friend Lucy an answer to the question of what happened to her cousin Dequan’s first girlfriend who vanished back in 2009. Nelis makes a wish to help Lucy with her puzzle, but she has no idea if it will work. Anyway, her own future is more enticing than trying to solve a decade-old mystery.

Tamzin, now in possession of her old memories and happily married to the love of her life, has let go of her obsession with Dequan, but Matin is convinced she will meet him again and make a belated explanation for her abrupt disappearance from his life.

Tamzin can’t see how this will ever happen, but her life is already stranger than any fairy tale, and in the end she accepts that Matin is usually right. She leaves the matter in the lap of fate, but fate hasn’t finished its games with Tamzin yet! 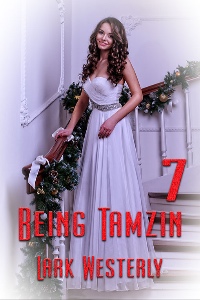 Tamzin Herrick had waited a long time to confront her parents. She’d run away from them the year she should have turned eighteen, and she’d had no contact with them since.

That was what she’d believed until today, anyway. Now she’d discovered that Ada and Mister Sinister, or whatever their names really were, were still playing their peculiar mind games with her and with everyone else.

They’d made her childhood a confusion of change and uncertainty. They’d forced her away from her first best friend, Emily, and they’d made her break up with her first love, Dequan, without a chance to explain or to say goodbye. They’d changed her name and her age and her possessions repeatedly, and they’d filled her with apprehensions.

Maybe if she hadn’t spent seven years in fairyland after she’d fled, she might have found out sooner. She might even have known, by now, whether this day in March really was her twenty-eighth birthday.

Apprehension was not a good companion, but now all those apprehensions had gone. She had her parents cornered in a coffee shop, and she felt solidly determined and utterly confident.

After all, Matin Campania was with her, and her darling elf man had promised her that her parents would explain themselves, whether they wanted to or not. Matin didn’t break his promises.

She was aware of a lot of fuss from people behind them near Gallery Twenty-Five, but she was focused on Galleria Coffee—and on her cornered but oblivious quarry.

“We’ll order something first,” she whispered as they entered.

Matin turned his face to the counter, and after a sweeping glance behind them, he ordered a pot of tea for four, and four plates of cream cake.

“We’re joining my fiancée’s parents over at table nine,” he said. He added, smiling, “We’re determined to break down their resistance.”

“Our cream cake will do that,” the server said with a grin. “I’ll bring it over. Cash or card?”

“Card.” Matin took his wallet out of his pocket. “You go ahead, sweetheart. I’ll be with you in a minute.”

Tamzin blew him a kiss.

With a swish of her green dress and a determined tapping of her spy-heeled shoes, she walked over to table nine and pulled up a chair.

“Hi, Mum. Hi Dad…or is it still Breezy and Clem? How the hell are you?” She stared into their shocked faces, daring them to make a public scene. Then she said, quietly, “Penguin? Why does he call you Penguin?”

Her mother shrugged. “An Adelie is a kind of penguin. Hence—penguin. Paul always did have an allusive way with words.”

“Who are Paul and Adelie? Our names are Ayesha and Joe Chaucer.” Her mother tapped her chest. She wore a sports watch on her left wrist, and a plain gold wedding band. Her face was bare of makeup and her straight strawberry blonde hair was pinned up to fit in under a helmet.

She had lines in the corners of her eyes and a pair of bike gloves tucked in her top pocket.

Tamzin took in the stranger who had borne her in a glance, but she stuck to the matter in hand. “Your names are not Ayesha and Joe anything. Paul and Adelie—what?” She looked up as Matin slid into the seat beside her. “They’re being obstructive.”

He nodded to them. “Fou wasn’t much hurt when you threw your bike at him,” he said to Paul.

“That was—unfortunate. Spur of the moment reaction.” He rolled his eyes to Adelie. “I said he should have been put down—but no, you had to play that last hand, right? You never did know when to fold.”

“Don’t you dare talk about Fou like that,” Tamzin snapped. She added, “What happened to Barney? Did you put him down when he became an inconvenience?”

Adelie put out her hand as if to touch Tamzin’s. Tamzin jerked away. Her gemstone bracelet, a birthday present from Matin, spat rainbow fire.

Adelie looked taken aback, but then she recovered. “No, of course we didn’t put him down. Barney was my childhood dog. He lived to be fifteen. When he died, we got him a peace lily.”

“You missed him when he went. You kept on asking for Ba-ba,” Paul said.

“You left the peace lily behind.”

He shrugged. “We couldn’t take it on the ship. Quarantine laws. They don’t live that long, anyhow.”

“What?” Tamzin gave him a hard stare.

“Well, that’s longer than I got, the first time I was Tamzin.”

Out of the corner of her eye, she saw Adelie’s brows rise and Matin gave a tiny humph which presumably covered a desire to laugh.

Paul gave her an amused look. “Plants don’t breathe, Mills. You ought to know that. Didn't you once work in a florist’s shop?”

Adelie said, “It’s a different specimen, but as close as we could get to the original.”

The server came to the table and put down a loaded tray. “Enjoy,” she said as she briskly removed items onto the table. She looked down, nonplussed, at the barely touched coffee Paul and Adelie had.

“I do hope you haven’t added a purgative to that teapot, Alexandra,” Paul said.

“Of course she hasn’t, Joe. She’d never do that. It would affect them as well.”

From dogs to peace lilies to things in coffee—Tamzin had almost forgotten how impossible conversations with her parents could be.

As if I’d put anything in their coffee…

She remembered her friend Daylight had put poteen in hers once, and she’d all but accused Daylight’s friend Garret of adding something to the coffee when she’d been at Wildwood Studio.