When restaurateur Hugh Neumann rebukes Oliver Nicholas’s very public proposal to his boyfriend during a Valentine’s Day dinner, the diverted Cupid’s arrow strikes Hugh not in the heart, but in the ass.

After a media storm of commentary, ironically pro and con, gains national steam, what Hugh begins to refer to as his personal “St. Valentine’s Day Massacre” begins to affect home life with his partner, Dominick Brodie.

Was Hugh’s overreaction pandering to his largely heterosexual clientele? Or did the incident trigger his own panic about same-sex marriage? Will the public scrutiny threaten his decade-long commitment to Dom? 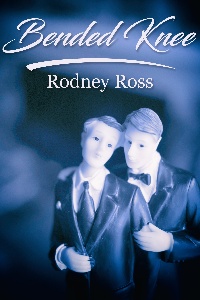 Too late to make that night’s local broadcast, the labor pains of “the incident” began the next morning. It wasn’t the lead, but damn close.

“In a curious twist already reverberating in the gay/lesbian community, a local restaurant owner ejected a male couple after a public marriage proposal.”

Reverberating? Did this warrant a Richter scale? Because, minus media coverage, there wouldn’t have been a ripple.

“But this incident has people scratching their heads: the owner of Platte is a gay man, too, one notable in the GLBT community.”

I wasn’t going to get a break even in bad publicity. The anchor had mangled Platte as Pilates.

“I consider it a human rights violation. What the Supreme Court giveth, one mean-spirited person can still taketh away,” Argyle, my new antagonist, told reporter Roxanne Hess as he hugged himself.

From this interview I discovered three things: 1.) I’d suppressed freedom of expression. I was the Taliban. 2.) Argyle had a name. It was Oliver Nicholas. He was twenty-five. 3.) From the giveth and the taketh, Oliver clearly spoke fluent Shakespeare.

I myself was ambushed by Roxanne outside Platte when

I stepped out to see why a white van was idling curbside. In my cutaway, I looked bewildered, shifting around like I was on roller skates, with such bad rosacea it should be case studied. I was not my own best advocate, and it was why it was the one and only statement I would make to the media.

“This is a big misunderstanding,” I'd explained, sounding like I was being strangled. “The moment simply felt intrusive on other people’s experience. It was their Valentine’s Day, too.”

Roxanne was in a pool of white under a parking lot lamppost, as though touched by God’s fingertip.

“WLFX wasn’t allowed in Platte --” she mispronounced it Palate, which at least made more sense “-- but other diners we spoke to outside called it unfortunate.”

A customer I didn’t recognize but will never forget hurled an arrow Cupid had left behind.

“That this, what was his name, Hugh? fellow couldn’t indulge a romantic moment just seemed ... petty.”

Roxanne even reached out for local expert comment. Somebody I had never heard of but whose style template was Johnny Weir incisively ventured that I was “a closet case study in internalized homophobia.”

“Miss Brodie’s Girls.” And how do I disprove homophobia? Should I have sucked dick on-air?

By evening, the reverberations became seismic.

Other network affiliates were all over it. They unearthed file footage of other “incidents,” mostly in red states, where businesses had committed outrageous bias against gay customers. I didn’t quite refuse all further interviews. I, as reported, “didn’t return repeated messages for comment.”

CBS slyly grabbed an early morning exterior shot of Platte when the parking lot was empty, implying devastation. I expected a CGI tumbleweed to whoosh past and to hear the dubbed-in howl of a coyote. The story included interviews with customers coming out of Penelope’s. One woman in a headband, framed to include our offending signage, chirped, “I’m-straight-but-not-narrow.” It was a little too boastful. It’s like telling people you’re rich. You don’t have to.

NBC’s reportage contained a rare personal aside from the anchorman, who mentioned that “Wow, I’ve eaten at Platte.” (He came closest; he pronounced it Plate.)

ABC contacted the plaza’s management corporate base in Philadelphia, who offered that they “were remaining neutral in this important dialogue.”

Note to self: on next month’s rent check, draw a smiley face on the memo line.

The provenance of the photograph they flashed of me was puzzling. Then I remembered it was taken specifically for an annual report of our county’s AIDS Service Organization, when I chaired a fundraiser to help house those living with HIV/AIDS. A weird shadow had created a sizable gap between my front teeth. Or maybe the vindictive PR director of Positive Steps had blacked it out. I half expected a cartoon bubble with a blurp! sound effect and in it would read, “What, me worry?”