If only she’d known that falling in love would have changed her life in such a turbulent and unexpected way . . .

It is 1799 and six ships make ready to sail from the southern English town of Portsmouth to the newly founded penal colony of New South Wales. Aboard His Majesty’s ship, Osprey is Marine, John Radford. At the age of eighteen, John an accomplished artist, is broken-hearted at having been rejected by his intended when she learns of his new posting.

Also, on the ship is Sarah Lock, a seventeen-year-old, who having been falsely convicted of prostitution, is to be transported. Her only crime had been a friendship with her landlord’s youngest son, Peter. He, in turn, is forced to join the navy to prevent him from searching Sarah out.

Unbeknown to all concerned, due to a series of cruel twists of fate, all their lives will be turned upside down . . . 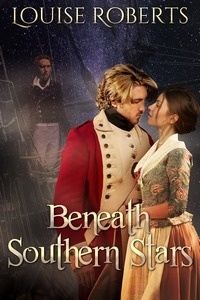 There were many things Sarah wanted to know about John, particularly about his family. Although he had talked about them during their long journey to New South Wales, he had never elaborated on his family life. She also couldn’t get Clare’s comment out of her head about John possibly having had an admirer back in England. She was determined to find out, but was struggling to find the right way of broaching the subject. Even though they seemed relaxed in each other’s company and the sound of the water rippling along the shore added to the peace about them, John could sense her mental unrest. He stopped walking and invited her to sit on the sand to watch the water for a while. They sat in silence for several moments enjoying the solitude, and then John turned his head to face her.

“Are you thinking of Peter?” he asked caringly.

“I had thought of him, yes,” she began still staring at the water, “but not recently.”

“Do you still believe he let you down?”

“I’m not too sure anymore. It seems such a long time ago, and . . .” she hesitated and turned around to look at him.

“I suppose it is possible that he did try to rescue you,” John said filling in her sudden reluctance to continue. “The thing is it is not so easy once the justice system gets involved.”

“Didn’t you tell me, Clare believes that it was Peter’s father who caused all this misfortune upon you?”

“Yes,” she said, stretching her legs and pushing the sand away from her with the heels of her feet.

“From what she has said about him, makes me believe that Peter might have encountered a great deal of opposition which made it impossible for him to get to you.”

Sarah looked at him strangely, as if he was about to abandon her as well.

“Before I left England, I was betrothed to a young woman. She looked a little like you, except for the colour of her hair and eyes. Anne and I had known each other since we were children and our parents had hoped we would be one day be united in marriage.”

Sarah leaned her body over to her side, propping herself up on an elbow and began to listen to John intently.

“When I had learned that I was assigned to join the Osprey for this long voyage and a minimum five-year tour of duty, I was also told that wives were permitted to accompany us,” John continued. “Naturally, when I told Anne all of this, I believed she would be overjoyed.”

“Oh, there were tears of course, from everyone,” John said bitterly snapping his head back to face the water once again, and seemed surprised to see that it was getting quite dark. “Mostly from Anne who insisted I resign my commission and stay in England to marry her.”

“Did you consider it?”

“For about five minutes.”

“I thought I did,” John answered though somewhat distantly. “The truth of the matter is that I don’t like to shrug off my responsibilities. I had promised my father that I would become a member of the Marine Corps. To serve England as she saw fit. Having received my orders, I was not going to let my father, my country or my honour down. I may have loved Anne, but I believe I loved England more.”

“And who do you love now?” Sarah asked soothingly.

John looked at her and smiled.

Sarah stretched forward and kissed him gently on the lips. Then jumped up giggling and sprinted off along the beach teasingly. John stared at her dumbstruck for a moment then collecting the packages off the ground next to him, ran after her. He caught her up not long after, grabbing her around the waist with his free hand, bringing her to a stop. She laughed and struggled free. She turned to face John and reached up and kissed him once more. This time she didn’t run away again, instead, she began to caress his face, and run her fingers through his hair.

John dropped the packages and began to reciprocate the ritual. He reached around the back of her frock and began to untie the laces. Sarah sighed amorously and let her hands drop to her sides, then tugged at his shirt pulling it out from his breeches. John brought his hands to her face, cupping her head in them and tilted it up slightly so that he could lean down and kiss her. As they held each other in a long embrace, Sarah, feeling the dress was loose about her, slowly slid it off her body exposing her nakedness to him. He kissed her again on the lips, then her neck, and as he did so, encouraged her to kneel onto the soft sand. She did as bid, and then lay down, watching him as he quickly removed his own clothing.

John stretched out next to her, greedily gazing upon her delicate white skin, which seemed to glisten in the moonlight. He remembered her bathing that first time on the ship and the excitement of it when he spied upon her beautiful breasts. Her proximity and the warmth of her body made him shudder with desire. He lay on his back, and encouraged her to straddle him. Her slight hesitation suggested this was a first for her, and he guided his manhood into her. She let up a small yelp, but then arched her back, sinking lower onto him. Slow at first, she commenced to rotate from her waist. A sigh escaped her lips, as she felt John suck on one of her nipples. He then sat up, but held her in position, keeping them truly entwined, and allowing their emotions to flood over. A soft breeze caressed their naked bodies, and beneath southern stars they allowed their passion to overflow in unforgettable love.