When Neal Tate, a just-out-of-rehab NYC party columnist, falls for Dewalt, a Harlem drug dealer he meets at a gay bathhouse, he discovers that navigating an honest relationship is a lot more difficult than chasing down the perfect pair of skinny jeans.

Neal finds support from his fashion-loving friends: Rovvy, a blond boy-toy married to Andres Palamos, the shady millionaire owner of Pop magazine where Neal works; Nick, “It-boy” style writer for the New York Times whose fab job and rich hubby are smothering his desires to design; and Annie, straight-girl art director at Pop who gives Neal’s life a smidge of balance.

The success of Neal’s "Bergdorf Boy" column and his growing love for Dewalt lead him to question his capacity for intimacy and his obsessive commitment to both the latest trend and anonymous sex, and to wonder if a monogamous gay marriage could be in the cards. 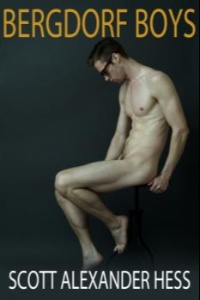 The men in the porno were daring Neal to give up. Every grunt, every smack on the ass, every Romanian groan of pleasure told him to run. He’d been at the Palamos party ten minutes -- hiding under a mink blanket in the Jade bedroom. It had started well enough. He’d made it into the mansion confident and ready to mingle. Then, moving from the searing summer heat into the frigid, wildly air conditioned entry hall, he saw the masses of gigantic white teeth, lithe bodies, runway couture outfits, champagne flutes and chattering, fiercely-sharpened tongues, and he felt like a hick Missouri fraud. Suddenly the cute, anchor-detail knit top that he’d maxed out his Bergdorf Goodman credit card for seemed very, very last season. He was getting ready to turn heel when he spotted the boy.

A servant likely, wearing a sheer skin-tight white bikini. Barely seventeen, Neal guessed, he was lounging with his ass propped on the edge of a long marble table, one leg draped casually over the tip, his inner thigh open, soft and hairless. The boy was flexing his leg muscles and spreading his thighs ever so slightly. The curved hem of his silken bikini pressed into that crease between the top of his leg and the edge of his crotch. The boy was laughing, turning to smile, as a waiter offered Neal pink-shaded liquor and socialite Trudy Pratte swooped at him. He’d fled to the Jade room.

Upstairs, under the mink blanket, Neal practiced deep breathing. In through the nose, out through the mouth. The Romanian porn actors groaned from the flat screen television, taunting. Sex and alcohol, a perfect pairing since puberty, had finally turned on him. Two months out of rehab, the skin-crawling rawness of being sober had kicked his animal urges into chaotic overdrive. If he wasn’t doing Yoga, or shopping at Bergdorf Goodman, he was in constant, teen-like hard-on mode. Unfortunately, he couldn’t put two flirty words together without a cocktail to lubricate his tongue. The mere site of a pretty servant boy spun him into a panic. He wanted to leave the party, but he couldn’t cop out on his good friend Rovvy. Rovvy had worked like a fiend to get Neal the gig as editor at Pop magazine, the city’s premier gay weekly, which his lover Andreas Palamos owned. It was the editor’s job to attend fetes like this, and Neal desperately needed the work. The rent was backed up, the credit card bills overdue, Con Edison had sent a turn off notice, and he refused to call his family again for help. Breathing in, breathing out. He felt like he might hyperventilate. Through the shut bedroom door he heard muted voices from downstairs. He imagined the door bursting open, the voices flying at him, attacking. He hated feeling so nervous, so often, with nothing but sex as a possible relief.

Bergdorf Boy here, promising you the sexiest summer on record. Steam heat, men to meet, brassy baskets. Beginning next week, BB will twirl you through it all with a secret peek at hook ups, hang outs, “celeb backroom spottings” and the question on every boy’s twittering lips -- where is the best pinga in the city, the hottest fashion and the best spot to nab a rich hubby? Until next week. BB.

He snapped the magazine shut. The truth was he had no idea what he was going to write about on a weekly basis. The very idea completely overwhelmed him. Neal started to rip off the mink just as the bedroom door swung open then shut softly. He lay very still. He heard laughter, two men. He recognized one of the voices -- a bar owner and big Pop advertiser. Perfect.