Billy is trans masc and, admittedly, a bit of a geek. One day he goes to a local comic con and meets a handsome artist there who draws wonderful and diverse comic book characters.

Billy is instantly smitten, but he's far too shy to ask Scott out on a date, so instead he asks Scott if he'd want to collaborate on a new comic book with him.

Because that will be easier than a date, right? 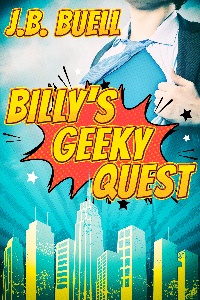 "Hey, I like your shirt," said a deep yet friendly voice.

Billy glanced up, though he usually avoided making eye contact with vendors, and his glance turned into a stare as he laid eyes on a very handsome and broad shouldered hipster in a blue button down. He had a ruggedly handsome look with shaggy, dirty blond hair and a darker beard, and perfect white teeth when he smiled.

What the hell, Billy thought. Since when did cute hipsters have tables at comic fairs?

The guy was still smiling at him and Billy realised he had yet to respond. "Um, thanks," he mumbled.

"It's from that comic, right?" the hipster asked.

That got Billy's attention.

If this hipster was gay, Billy would faint on the spot.

"Uh," he managed, adjusting his bags and feeling really awkward, "yeah, it is."

"I like the comic a lot." Hipster leaned in and reached across his table for an art print. "I drew some genderqueer characters myself recently."

Billy nearly dropped his bags in surprise. "You drew these?"

The hipster looked up at him, all blue eyes and rugged gorgeousness, then he smiled warmly.

"Yeah. I drew all these," he said easily, and offered Billy a handful of art prints. "Here, take a look. I'm trying to put together a comic, so most of these are character studies right now."

Billy took the prints and carefully looked at them one by one. "These are really good," he murmured, absorbed by the color and vibrancy of the art, the attention to detail. "Oh!" he exclaimed, coming across a character that looked half gay bear, half hipster merman, and a bit on the chubby side.

He turned that print around to show the artist.

"This one is amazing," Billy told him. "I like that you've done ... you know, different body sizes."

"Thanks." He grinned in response. "I'm still working out a concept right now, but I'd love to do a diverse team of heroes or crime-fighters with powers. Something fun, you know?"

Billy smiled back. "Oh, please, make it fun. So many cape comics are all gloomy and depressing right now."

Billy's mouth dropped open in a small 'o' of surprise.

He almost said it, but he had never actually written a comic before, only stories for himself or fan-fiction. He was a newbie, and surely this artist would want someone with experience, or with connections.

"I ... hope you find someone," he said, looking back at the prints in his hands. "I love your style."

"Thank you," he said. "I'm planning to have my first table at Flamecon this year, so I'll be on the lookout for writers."

"You don't want to write it yourself?" Billy asked.

"Nah, I suck at plot." He laughed again, eyes crinkling with amusement. "Art's fine, but plot is not my strength."

He wanted to buy some of this guy's art, and he probably had about twenty bucks left to spare.

"How much are these prints?"

The artist smiled at him. "Well, they're ten dollars each, but for you, pick one you like, on me."

"Oh! Um ..." Billy felt his face flush, but tried to tell himself not to get all excited, this guy was probably just being nice to bump his sales.

Billy ended up buying two more prints on top of the free one anyway.

The artist bagged them up and handed them over with a warm smile. "Thanks so much! Great to meet you ..."

"Oh, Billy." He took the bag with a shy smile, trying his best to play it cool.

"Well, great to meet you, Billy! I'm Scott. Hopefully see you at another Con?"

Although ... that was months away.

He hovered awkwardly for a moment, wishing he had the game to keep the conversation going, but self doubt crept in, convincing him a hot guy like this would either be spoken for, or have a type that would certainly not fit Billy's description.

So he said goodbye and hurried away to go find his friend's table.