Life can change in the blink of an eye.

That's a truth Andy Slater learns as a young man in 1982, taking the Chicago 'L' to work every morning. Andy's life is laid out before him: a good job, marriage to his female college sweetheart, and the white picket fence existence he believes in. But when he sees Carlos Castillo for the first time, Carlos's dark eyes and Latin appeal mesmerize him. Fate continues to throw them together until the two finally agree to meet up. At Andy's apartment, the pent-up passion of both young men is ignited, but is snuffed out by an inopportune and poorly-timed phone call.

Flash forward to present day. Andy is alone, having married, divorced, and become the father of a gay son. He's comfortable but alone and has never forgotten the powerful pull of Carlos's gaze on the 'L' train. He vows to find him once more, hoping for a second chance.

If life can change in the blink of an eye, what will the passage of thirty years do? To find out, Andy begins a search that might lead to heartache and disappointment or a love that will last forever. 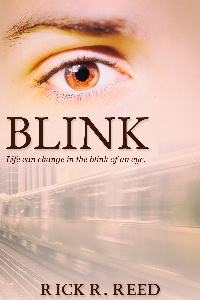 It was cold. January. Carlos was bundled into a blue down-filled coat, a brightly colored striped muffler wrapped around his neck. Black jeans. I, who had been riding the train since I switched lines downtown, had a seat, but he stood across from me, jammed against the frost-etched doors, surrounded by people who now only appear to me as blurs.

He was tall, maybe a little over six feet. His eyes I've already told you about, but the whole package was about dark allure, exotic. I would later come to learn from him that he was Cuban, but then all I could do was drink in the simple beauty of this man. His hair was black silk. In accordance with the times, it was parted in the middle, feathered back, and just long enough to cover his earlobes. His skin was fine, nearly poreless, and a lovely shade of café au lait. Broad shoulders strained the confines of his bundled-up winter coat.

In that instant when our eyes met, the connection was like a pulse that went straight to my heart. It lasted for only a second or maybe a bit longer, but in that short space of time, my fertile imagination pictured an entire future with this man. Days together strolling a beach as the surf from Lake Michigan pounded the shore. Nights together as Carlos, dark eyes penetrating my own green orbs, pounded me. Hey, I was twenty-two years old -- the hormones were flowing freely.

Yes, I lusted for him. In a split second.

And then I tore my gaze away. Heat rose to my cheeks, burning, in spite of the close-to-zero temperatures just outside the train car windows.

He had caught me. Caught me staring. In that fleeting moment, he had read my mind and seen the lust in my heart. He recognized me as the shameful, perverted thing I was, the queer I kept so carefully hidden from everyone I knew.

He was sickened by it. Or maybe another scenario -- he was amused. The latter option was no more comforting. I tried to swallow and found my throat and mouth dry. I chanced a quick glance over once more and saw he had opened the Sun-Times and was reading.

My thundering heart slowed a little, and my rational mind tried to soothe me. He doesn't know. He's just another stranger on the train.

I chastised myself. I couldn't allow the luxury of thinking the way I did about Carlos, even if my reverie lasted for only seconds. I was engaged to be married to my college sweetheart, who was, at this very moment, on the suburban commuter train, the Chicago Northwestern, headed into the city for her job as a sales assistant at Merrill Lynch, from her parents' home in Kenilworth.

Alison. I turned my face to the glass and watched the river of cars moving along on the Eisenhower expressway, trying hard to forget the effect just a look from a man on a train had on me. The power, the attraction, the undeniable need I had for his touch. Whether I would admit it to myself or not, I was starved for the attention.

Yet I couldn't allow myself these things.

It wasn't who I was. It went against everything everyone -- friends and family alike -- believed about me. It went against the grain of the Catholic Church I had been baptized and confirmed in.

My biggest fear then was, if people knew, would they still love me? And the other worse fear was my awful wondering if anyone really did love me, because no one knew the real me, that dark part of myself I tried so hard to deny.

I forced myself to think of Alison, to replace the darkly taunting and delicious image of Carlos with her fair hair and blue-gray eyes, the warmth of her smile. I reminded myself, yet again, of my love for this sweet young woman. I pulled up a memory of her visiting me in the small town of East Liverpool, Ohio on summer break when we were both still in school. My parents had been away, and we spent a lot of time doing what two healthy nineteen-year-olds did (another reason I could deny these gay urges that polluted my dreams and fantasies and gave me no rest). We shared a fancy dinner neither of us could afford at the time just outside Pittsburgh. We saw The In-Laws at a long-ago razed movie theater in downtown East Liverpool. We slept curled into each other's arms on the twin bed in my boyhood bedroom, spoons in a drawer.

And I cried like a baby as I watched her drive off in the rental car to Pittsburgh International Airport. I longed for her. I wanted her back. I loved her so much.

Weren't those tears proof of my heterosexuality? Weren't the days and nights lost in passion with a woman evidence that I could not be the thing I feared most -- a gay man?

Of course they were. I couldn't be gay. I was engaged to be married in just a few months. We would have a big wedding in the Catholic church in Lake Forest. Surely being a happy husband and maybe, one day, father would erase these urges that plagued me, would make me whole, would make me normal.

I would be cured.

It wasn't a stretch. I enjoyed the sex I had with Alison. I loved her with all my soul. Just to spot her walking across campus toward me lifted my heart.

My breathing returned to normal. While I had been lost in thought, we had made several stops on the Congress West line. I looked over. Carlos had gotten off at one of those stops.

The space left by where he had stood seemed to stand out to me, shimmering. Vacant. Part of me wanted to run to the window to see if I could see him making his way along the concrete platform running between lanes of traffic. But I stayed put and tried to tell myself I was glad this temptation was gone.

Chicago is a city of several million, I reasoned.

The thought was both a relief and a terror.