Blood in the Golden Palace (MF)

Penelope Sweet is your average, low-income twenty-two-year-old. Working part-time as a local barista, Penny is a homebody and a bookworm with a creative mind for cooking. Her lot in life is to keep her head low and get her bills paid. Everything else is window dressing. That is, until she meets the charismatic owner of the infamous club, The Golden Palace. Not only does he seem to take an interest in her, he offers her a job at the club.

A job that she will never take.

When Penny finds herself at the wrong place in the wrong time, Angelo's façade is tossed aside, and the real man beneath the charm steps into the light. A man of violence and danger. A man Penny now must contend with for months if she's ever to see her freedom again. 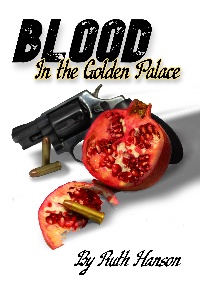 Blood in the Golden Palace (MF)

“Penny?” Angelo waved his hand in front of Penny's face, taking her attention away from the shop. There was a mischievous glimmer in his expression. “What's on your mind?” Penny's eyes flicked to the shop, and with no voice to say what she wanted, she squeezed Angelo's hand. Angelo took half a step forward, enticing her. “Do you want to go inside?” he asked. Penny nodded, silently. Angelo stepped back, still holding Penny's hand in a delicate gesture. Like a vampire leading its dinner to bed, Angelo escorted Penny through the doors and into the red neon.

“See anything you like?” he said quietly. Penny could feel the heat of his body just behind hers. Ready to snatch her up, should she give the word. Penny's knees locked at the prospect, but she pushed forward. She saw a display riding crop with a twist of purple satin running up the handle. She took it from its shelf. It fit beautifully in her slender fingers. Glancing behind her, Angelo remained close, but kept his hands folded behind him.

Penny put the crop back. “This stuff is still pretty strange to me,” she admitted. “I mean, not ... not strange. But I ... I wouldn't know where to start. Or ...” Penny turned back to Angelo, only to notice that there was barely a couple inches between them. “Or who to start with ...”

Angelo took half a step back to ease the tension. “Well ...” Spotting a pair of fuzzy handcuffs, he held them up to admire the cute hearts on the leather. “For a newbie, if one was so inclined, I'd suggest something soft. Maybe something sexy to wear, or a soft leather flog. Something made for beginners. As for who ...” Angelo hesitated, and Penny wondered if he was thinking about slipping her wrists into those cuffs. However, he put them back. “I would recommend someone who knows what they're doing. And someone you trust. Implicitly.”

Angelo turned back to her fully. “That depends,” he said. “Do you trust me?”

Penny bit her lip. “Should I?”

Angelo glanced back at the counter. The shop girl was still keeping herself busy with her phone. Realizing they wouldn't be bothered, Angelo took a step further. Penny retreated, and found herself flush up against the wall. Angelo had her cornered. His hands rested on some of the shelves beside her, effectively boxing her in. “Penny,” he growled. “You're making this very difficult.”

“Am I?” Penny breathed. Her mouth, by now, had gone quite dry.

“Yes,” Angelo continued. “I've done everything I can to keep myself away. You think I haven't wanted to make you cum from the moment we met? But I kept my distance. And then you had to go and be a naughty, naughty girl.” He shook his head. Despite the fact that they were not touching, Penny felt her skin electrify at the very thought of contact. “Do you know how hot that was? Did you know I didn't sleep that night because of you? Because that image was all I could think about? Now ... now you're in here, and you're asking me these things. You're tempting me, little mouse. And I am running out of self-restraint.”

“No sex in the store, please, thanks.”

The bored voice of the shop girl shattered the mood between them like glass. Angelo closed his eyes. Releasing the shelves, he took a step back, showing the clerk his hands. “Don't worry, we're not up to anything.”

Penny caught her breath, realizing she'd been holding it in for nearly a minute. She saw Angelo draw away, and something inside her stirred into action. Reaching forward, she took Angelo's hand with both of hers, stopping him from going too far. She couldn't find her voice to speak her mind, and hoped that she could communicate some other way instead. Keeping their hands together, Penny continued to peruse the wares. Eventually, Penny came across a section of lingerie. She paused, noticing one in the forefront of the display.

It was a harness, strapped around a mannequin's neck and breasts. The leather was a dusty, glittery pink, with a metal heart centered at the sternum. From the base of the neck and beneath the straps, a see-through, silky pink fabric cascaded to the navel of the display form, trimmed with light feathers. Penny reached up, touching the display with a delicate finger. Angelo, one hand still in hers, tucked a strand of hair behind her ear with the other.

“Do you like it, pet?” he whispered. Penny nodded. Angelo's fingers trailed down to her jaw, and he tilted her head towards him. “Would you like to wear it for me?” Again, Penny nodded, without hesitation. “Would you like me to fuck you in it? I need to hear you answer me.” Penny licked her lips.

Angelo’s grin widened. He lifted her hand, their eyes locked with each other, and kissed her fingers. “Then it’s yours.”