Ashleigh Wilson has been fighting for animal rights since she graduated from university with a degree in Environmental Science. Between rallies, protests, and dumpster diving, she's found a place for herself with The Green Criminals, a small but tight group of eco-warriors determined to put an end to environmental destruction and save many animals in the process. It also helps that the main leader of the group, a stunning and ever-so disciplined man named Ezra Monsoon, makes all her eco-efforts and flirtation over veggie burgers worthwhile.

When Ezra is captured after a protest goes wrong, Ashleigh vows that she will get him out. What should be an easy process of bailing Ezra out of the local jail goes awry when police inform her that it is the holiday weekend. Even with bail money, Ezra cannot be processed until Monday. And as Ezra tells Ashleigh in a one-on-one moment between the bars, Monday will be too late. When the full moon rises that night, Ezra’s decade long secret that he is a werewolf will be blown -- unless Ashleigh can follow his very specific instructions and break him out in a matter of hours.

Luckily, Ashleigh is ready for the chance to prove her merits in this new supernatural underworld, and protect Ezra in whatever way she can. She just hopes, that once the moon is no longer full, he comes back to her -- and only her -- so they can make up for all the time they've lost, not knowing one another as fully as they could. 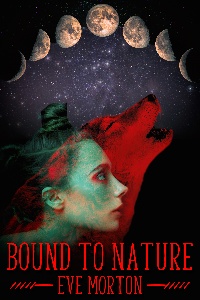 “I can come back tomorrow,” Ashleigh said. “Keep you company. I got a motel, just off the highway, and the gang’s not going to think anything awry until Tuesday morning. You’ll be out by then, and so we just have to wait this out. Maybe I can bring you a book --”

“That’s not going to work.”

“No, Ash. There’s something I need to tell you.”

Ashleigh squeezed his fingers over the cell bars. He felt so hot to the touch, somehow even hotter now than when they’d been out in the sun. She braced herself for a horrible confession. He did have a warrant under a different name, and the moment they grabbed his fingerprints, it would light up. She didn’t breathe for such a long time, she wondered if time had truly stopped.

“Monday’s not going to come for me in here,” he said slowly. His eyes were looking down at their hands, not at her face. “I have to get out of here tonight. Before the dark.”

Ashleigh furrowed her brows. Ezra’s dark eyes seemed to become even darker in that moment when he met hers briefly. His chiselled face seemed flushed, strained. Some flecks of his beard were coming back, but it seemed thicker than a mere five o’clock shadow. And his body was so warm. Was he sick? Was he --

“I need you to visit some people, okay? Can you do that for me?”

“This is not the ideal place,” Ezra said. He looked behind him at the men who, in spite of being physically close to him in the same holding cell, also seemed to be in their own worlds. Ezra looked back through the desk area to see where Officer Johnson was. When he seemed to affirm that he and Ashleigh were as alone as they could be, Ezra went on. “I should have told you this a long time ago.”

“You’re not a criminal. Or a terrorist, or anything like that. And even if you were arrested before and called those names, that doesn’t mean you’re not human.”

“You’re so sweet and kind,” Ezra said slowly, wrapping his fingers around Ashleigh’s tighter. “But let me finish. Let me get to the end before you speak, okay?”

“I’m a werewolf, Ashleigh. I know you’re going to shake your head and tell me that’s not true, but it is. You’re very smart, much smarter than you even give yourself credit for, but this is one thing that I need you to process with your non-rational brain. I’m a werewolf. Think about it, okay? It may seem foolish, but how do you think I’ve always known the exact right moment to leave the protests? I can sense the animosity of the crowd change and know when we’re in danger. How do you think it is that our squat never gets raided by the woodland creatures? They smell me. And I’m bigger than them.”

Ashleigh furrowed her brows. She did her best to suspend her disbelief -- but this couldn’t be true. Ezra was sick. He’d hit his head in the shuffle. But he rubbed his fingers over hers again, anchoring her to the moment. She stared into his eyes, and then, all of a sudden, her non-rational brain took over. He was different. He was ... Ezra, but somehow she could feel and sense him deeper than before. Even as he went onto explain other small quirks and anomalies of their group, and how they had stayed safe for so long due to his werewolf nature, she didn’t need to hear it anymore. She believed him.

“Does all of this make sense now?” Ezra asked.

“The flash,” Ezra sighed and shook his head. “That’s why I hate cameras. I hate the flash they have. It stuns me and my reflexes are down. It’s even worse when the moon is out.”

Ashleigh’s heart beat suddenly tripled. The same deep sense of knowing came back to her, and she knew that nothing else would convince her. Everything about Ezra made sense now. The cameras. The protests, the strong feelings she had for him, and his sometimes latent rage and anger. All of it made sense now -- even the wolf that he’d cradled that one time. Mara had been taking wildlife pictures that day. He’d been stunned. He hadn’t seen the creature, and so of course, his accident had felt like a betrayal of a species so close to his own.

“Oh my God,” Ashleigh said. She took away one of her hands from the bars in order to put it over her mouth. Her voice raised and Ezra quieted her with the other hand.

“Focus up, okay? Because you need to do these things for me. It’s the only way we’re both going to get out of here alive.”