Bound to the Saxon Lord

Lady Rosamund vividly recalls the day Norman soldiers raided her home, killed her father and seized the Wodnesfeld Estate. She and her childhood friend, the outlaw Saxon rebel Aethelric, are determined to thwart Lord Dunstan and his confidant Lord Leofwine’s efforts for peace. They hatch a treacherous plan that results in both men being sent to the White Tower prison, charged for a crime they didn’t commit.

When Dunstan’s brother Morcar arrives to defend them against their Norman prosecutors, he reveals that Rosamund is not only a deceitful liar; she’s also a rebel spy. All they have to do to be released is to expose her to the king. Surprisingly, both lords object to endangering Rosamund. However, Morcar ignores their wishes and soon both men are set free.

The king’s affection for her leads him to decide that the two will marry, return to Dunstan’s home, and thus, she will become his problem. And so Rosamund and Dunstan are married by royal decree. Will the mutual attraction they share be strong enough to overcome Rosamund’s betrayal? Can he ever trust her again? Will she choose love over vengeance? 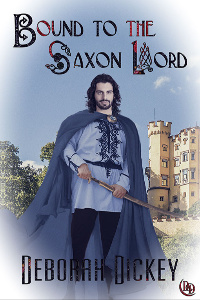 Bound to the Saxon Lord

“I have never met a girl who teases me as much as you, Rosamund, and I have had enough of your wicked games!” The lanky boy was so annoyed with his friend’s mischievousness that he quickly turned his back to her, in great irritation.

“Aethelric. Why should I believe you this time?”

Aethelric held his body stiff as he slowly turned back to face her. “Aye,” he said with what she was certain was a sigh.

“Then, I’m right.” She was about to continue with her teasing by adding another remark, but something in the boy’s expression made her stop. ‘Twas true she’d teased Aethelric excessively since the two were children, but in the last month or so there had been a great change in the way he usually treated her. Today, when they’d ridden out to the nearby beach through a thick morning drizzle, he’d seemed much more serious than he usually was.

She abruptly realized that it was necessary to look up at her auburn-haired companion. Why had she not noticed that Aethelric had become so tall? For the longest time they had both seemed to be of the same height. Why was he now all of a sudden so much taller than she? The thought had never entered her mind until this moment, but she also noticed that his shoulders had grown broader.

“I didn’t mean to make you angry with me,” she said more seriously.

He tightened his shoulders in acquiescence. “You are well aware that I can’t stay angry with you for long.”

They’d left their horses tied up to a tree and had been walking along the beach for quite some distance from the country estate of Wodnesfeld, where Rosamund’s Anglo-Saxon family had lived for generations.

Aethelric had solicitously taken her arm to help her make her way along the beach, though he of all people knew that she had always been more than capable of navigating the shore herself. She had gone along with his sudden burst of gallantry by leaning on him—only to jump quickly and lightly away out of his arms with a teasing chuckle. She had no idea that this would prompt another brief enraged outburst.

“Why whatever is the matter, Aethelric,” she said, seriously concerned. “I had not thought that you would be so vexed with your best friend.”

He stood in an angry posture with his hands on his hips. “Have you ever thought for a moment that mayhap I don’t want to be your best friend, Rosamund?”

She stared at him in bewilderment. “I can think of no reason why you would not!” she said.

“You’ve grown up, seo sweteste. Did you ever consider that it might be more that I wish to be more than merely friends?”

Rosamund was completely taken aback. At thirteen, she was old enough to know about what went on in the relationships between men and women, but she’d never dreamed of any of that with her friendship with Aethelric.

“By all that’s Holy, Aethelric,” she whispered after a moment, “now who’s doing the teasing?”

He quickly gathered her up into his embrace and bent to give her a quick kiss on her lips.

He had done so before Rosamund could even comprehend what was happening. Her mouth dropped open in complete surprise and shock.

“Don’t be a fool, Aethelric!” She extricated herself from his embrace, then felt instant shame as she saw the hurt in his eyes. “You have always been like an older brother to me, Aethelric,” she went on in a kinder tone.

“But you don’t understand, Rosamund. I’m not an older brother, nor am I any relation to you at all. If your father were not Lord Gronwig of Wodnesfeld, I’d have made my feelings for you plain long before now. I am well aware that I am so low in rank that he’ll never accept me as a husband for you, but that does not stop me from longing for you.”

Rosamund began to feel panicked. She felt the memories of her carefree childhood slipping away. Aethelric might have been her best friend, but she did not understand what he meant by the longing he spoke so passionately of. His words made her shiver as though a cool breeze had suddenly blown in from over the water.

“I fail to see why we should not remain the friends we’ve always been?” she asked, turning away from the new look of desire in his eyes. “I absolutely have no wish for more. By the Holy Rood, ‘twill be years before I will be old enough to be wed.”

“You’re thirteen, Rosamund. I have no doubt that your father has already had many offers for your hand in marriage. Scores of young eligible men will be eager to be wed to such a beauty such as you.”

She looked up at him, her mouth set in determined lines. “Aye, and I will most certainly turn each one down as soon as he receives them, for I’ll not wed until I fall in love—which may never happen.

Aethelric shook his head unhappily. “You’re the last of the Wodnesfeld family, Rosamund. The estate will belong to you one day. You’ll most certainly be in want of a man to help you defend it.”

Her gaze fell upon the manor house to which Aethelric referred, then she shivered and crossed herself. “I pray to God that my father will live to see many more years, Aethelric.”

The laughter of the morning had dissipated as they stood beside each other for several moments looking at the estate, each lost in their own thoughts.

All of a sudden, Aethelric quickly grasped her arm. “Rosamund, look over at the Manor! There are riders!”