From high school crushes to best friends, secret admirers to out-and-proud teens, these stories bring to life all the amazing -- and frightening -- aspects of falling in love for the first time. Whether you're sixteen and looking for stories about boys your own age or you're older and want to reminisce about the "good old days," there's something in this collection for everyone.

NOTE: The stories in this collection are available as single ebooks, or you can buy the whole collection. Contains the stories:

* Caught * First Kiss * Gimme Pride * His Biggest Fan * Just a Little Note * My Online Secret Admirer * The Man Next Door * Trouble at School * Who's Watching Whom? * Worth the Wait 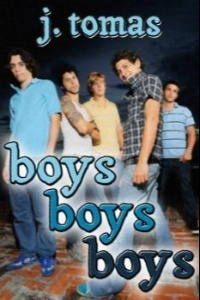 EXCERPT FROM "Just a Little Note"

Bryan sits by himself at a table in the cafeteria, struggling with the Geometry homework he left until the last possible moment. He has the class sixth period, and forgot all about the problems the teacher assigned the night before. If he didn’t turn them in on time, his parents might find out, and they’ll want to know why. His only excuse is he forgot, plain and simple, because he’s been so busy with the play, and if his mother hears that, she’ll make him pull out of the production.

Which he isn’t going to do, no way, no how. Hopefully he’ll have enough time to fake his way through the problems before he has to turn them in. He hates Geometry.

Worse, his mind keeps straying off the homework and down the table, where the rest of the cast who has this lunch period is practicing their lines. Jesse sits at the end closest to Bryan, and every now and then throws him a sympathetic look. He even offered to do the problems for Bryan, if that meant they could sit together and review the lines, but Bryan knows Jesse’s as bad as he is at math and the teacher would get suspicious if both their papers contained the same wrong answers. No, he told Jesse, let him finish the homework and then he’d join in.

But Bryan can’t concentrate, and every now and then his gaze wanders to where Jesse sits, fork spearing his French fries as he waits for his line. The last time Bryan looked, Jesse was looking back. When he saw Bryan, he smiled.

Since then Bryan’s been fighting with the Geometry problems as if they’re to blame for the way his heart aches.

An elbow nudges him playfully in the back, followed by a girlish giggle Bryan recognizes. “Hey, boy.”

He looks up as Emily sinks down onto the stool beside him. She looks exhausted -- the whole cast does, if he’s being honest. The past week has them rehearsing every day after school, and the night before they didn’t leave until well after nine. Only to sleep a few hours and rush back here at seven in the morning to start it all over again. As much as he likes this production, Bryan can’t wait for it to be over. “You look like I feel.”

Emily manages to flash him a tired grin. “That good, eh? You sure know what to say to make a girl feel pretty. What are you doing down here all by your lonesome?”

“Geometry,” he tells her.

She leans over his arm to see what he’s writing and groans. “Fun.”

She starts to nibble on her salad and looks around. Bryan tells himself she’s not looking at Jesse, but he knows she is. She has the hint of a smile on her face and, when she speaks again, her voice is lower, conspiratorial. “Hey,” she whispers.

He glances over at her. How bad will it sound if he points out he needs to get this homework done and can’t really talk? Least of all about Jesse, he thinks as she appraises him. I don’t need to hear you tell me how cute he is. I already know.

With a slow nod, Bryan thinks he knows where this is going but he can’t come up with a way to derail this train of conversation. “As far as I know. Why?”

Emily chews on her lower lip, a nervous habit of hers Bryan finds annoying. It pouts her lips and gives her a natural bee-stung look straight guys probably like. Jesse probably likes. “If I tell you something, it’s just between us. Okay?”

Leaning back in her seat, she sighs. Her voice is still low. “What do you think of Jesse?”

Oh God. Bryan’s sure she doesn’t want to know how he thinks Jesse’s smile outshines the sun, or that his eyes are as endless as the night sky, or that he’s sexier than anyone Bryan has ever seen. He doesn’t need to tell her this, not when it’s apparent she’s thinking the same thing. Carefully, he asks, “What do you mean?”