Playing off today’s headlines, Burying the Dead serves up a high stakes game of love and death set on the power courts of Washington, DC, and other glittering world capitals.

There Dimitri “Dimi” Orlov is a rising Russian tennis star whose glamorous, globetrotting career provides the perfect cover for his real day job -- agent and assassin. Trained by his government from the time he’s discovered in an orphanage, Dimi is assigned to assassinate the president of the United States -- a brilliant but arrogant onetime New York prosecutor who’s proved too independent for his Russian backers -- by romancing and enlisting his abused first lady, Catherine Darlington.

Dimi courts the lovely, loveless Catherine at Renaissance House, a new cultural center in historic Dupont Circle that’s a front for Russia’s Foreign Intelligence Service (SVR), and at the US Open. There he’s shadowed by CIA agent Mitch Abramson, who has begun to connect the dots. But just as the various matches – Dimi and Catherine, Dimi and Mitch -- heat up, Dimi makes a choice that could have his bosses take him out of the game permanently. 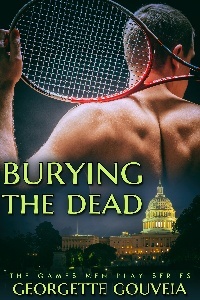 Dimi was trapped, and he knew it. This was not an assignment he could refuse, as if he could refuse any of them. The only way through it was to meet it head on. So, the next night, he stood in one of the galleries in his form-fitting cream-colored suit, deliberately accented by a pale pink shirt and deeper pink print tie and pocket square -- trotted out like a prize stud, he thought miserably -- communing with the works long enough to become a docent, he thought; desperately trying to dodge the circulating waiters with their glasses of wine and plates of hors d’oeuvres; waiting for the rest of his life to happen; waiting for her.

And first lady Catherine Darlington did not disappoint, arriving on time, slipping in without fanfare, sharing a word, a smile and a handshake with everyone; stunning, Dimi thought, in a sleeveless blush cocktail dress, fitted to the waist, that swept out on a bias. It was accented with the most delicate of pink pearls at her wrists, throat, and ears and in the snood that held her chignon. Dimi was touched, no moved, by her utter loveliness and by something that was in short supply in his world, compassion.

“What a pleasant surprise to see you again,” she said, smiling and extending a hand to Dimi before the ambassador could make any introduction.

Dimi took her hand and kissed it. It was a spontaneous gesture, an echo of an imperial Russia long gone. If he were embarrassed the moment he did it, she was not. “Such charm,” she said, allowing her hand to linger in his. “Are you as much a fan of classical culture as I am?” she asked.

“Dimitri Alexandrovich is the pride of Russia,” Valerian jumped in, with the hard sell of a press agent or a stage parent, Dimi thought. “Smart, talented, a good boy. Why just now he was offering the most insightful commentary on one of the paintings in the next room. I’m sure he’d be happy to show it to you.”

Yes, such a good boy, Dimi thought, who travels the world slaying opponents on the court and murdering others off it. And what insights? He loved art, but he loved it as an escape from what he did. The beauty of an escape was that you didn’t analyze it. You let it wash over you.

Dimi kept a body’s width distance as he and the first lady strolled past the paintings. He was aware of the chief of her Secret Service detail -- Vaughn, she called him -- trailing behind. You have nothing to fear from me, Dimi thought.

“Mrs. Darlington,” he finally blurted out. “Dear lady. I am afraid you have been brought here under false pretenses.”

Dimi thought she looked momentarily alarmed. “I have?” she managed to say, smiling.

“Yes, I’m afraid I have nothing brilliant to offer on the art, only my deep gratitude for the graciousness you showed me at the Citi Open.”

“But it is I who am indebted to you for taking time from your US Open preparations to support our initiatives on the arts for inner-city children. I’m deeply touched.”

They found themselves before a copy of a sculpture of Catherine the Great as Minerva, the Roman name for Athena, the Greek goddess of wisdom.

“Beautiful,” she said. “Didn’t this Catherine have a lover named Orlov? A relative perhaps?”

Almost immediately she seemed to realize she had steered the conversation into an area neither should be exploring, for she blushed deeply, her flushed face mirroring his own.

“Orlov is a common name,” he said, jumping in to rescue her, “but yes, Grigory Orlov was Catherine the Great’s lover, a distinguished soldier though he proved a less capable adviser.”

When it was time for Catherine to take her leave, Dimi thought he had failed to get his mission off the ground. But then he parsed what she had said in parting: “I hope to see you at the US Open,” not “I hope to watch you play at the US Open.” That could be on cable. She was planning to attend.

Plus, in her haste to depart, he found she had dropped a light pink wrap at his feet. He thought of running after the black SUV that had delivered her. Then he remembered the stories of Tesla encountering the great French actress Sarah Bernhardt at Delmonico’s in New York -- or was it at the Columbian Exposition in Chicago? Legend had it she dropped her hankie to attract his attention, and Tesla, married to science -- or perhaps deeply closeted as there were always rumors about him and the war hero Richmond P. Hobson -- returned it gallantly, albeit without swallowing the bait.

But Dimi preferred the version in which Tesla kept it, just as he did now, unwrapping the shawl from his rackets for good luck a week later as he prepared to play his first match at the US Open, inhaling its unfaded perfume.