Loch has chosen to forgo the usual paths that marked men, like him, complete to enter into Service and become fabulously wealthy. He has instead chosen to attend the University of North Carolina. His first year is quite extraordinary as he finds his way and is drawn into a situation with the football team. The team wants to claim him, if not for all of them than at least for one player. Loch finds himself being forced to find a player to date. He finally decides on another freshman, Marcus Battle. Their relationship is just getting started as the school year comes to an end. Neither one of them knows how to negotiate the summer or the next school year. Together they seek the answers to their questions. Will the obvious differences between Marcus and Loch come between them or will they find a way to win the game? 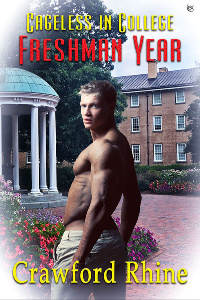 My first day on campus at the University of North Carolina was a special day. It ranked right up there with the day my baby brother arrived at our house and, of course, the day I received my mark.

The mark resembled a bright blue streak that ran almost from my left earlobe to the tip of my chin. It appeared on the exact moment of my thirteenth birthday. I remember it like it was yesterday. Sitting at the kitchen table with my father, older brother, Paul, younger brother, Stan, and my grandfather, we were talking after just finishing my favorite meal and anticipating the birthday cake.

I saw the look of shock on Dad’s face first. It started with a slight widening of his eyes and then followed with the drop of the bottom jaw. Immediately knowing what it was, I ran for the small bathroom near the kitchen. I had been expecting this for quite some time. Flipping on the lights, I quickly looked in the mirror and saw the mark.

The mark was light at first, only a splotch on my cheek, but soon it darkened and got longer. The mark singled me out as a man who was sexually attracted to men. The odds of me receiving a mark were very slim. The mark signaled that I was one of the one percent of men to receive it. I had lived my thirteen years on Earth without ever meeting another marked man or even seeing one in person. Our world contained a majority of non-marked men, who were destined to be sexually frustrated. These non-marked men, or NOMARs, as we call them, are sexually attracted to women, which our world had not contained for hundreds of years.

Several months before the mark actually appeared, I had come to believe that it was imminent. Noticing a change in my body, my mind also started to make the connection that I was more than just friendly with the boys in my class. So, when the mark appeared that night in November, I was not shocked.

My family, however, was stunned. According to my dad, I was the first marked boy in the family for as long as they could remember. I wore my badge proudly, even though my brothers’ looks of horror were forever etched in my memory.

School was a bit more of a challenge, but overall, I felt like I had weathered it well. High school was hard enough for most students, but was a special challenge for a student who everyone wanted to fuck.

I had always been a confident person―someone who wasn’t afraid to try new things, to speak up in a crowd or to barrel right through a new situation without giving it much thought. But I was not quite ready for the giant pulsing mass of hormones that was my high school years.

Those lessons usually led to the second opportunity that the mark brought. This was the chance to enter The Service, which was a program where wealthy NOMARs could contract with a marked guy who would become their sexual Servant. The NOMAR would become the Master for the period of a year, and the contract could be extended for more years. In exchange for agreeing to this, the NOMAR agreed to pay the marked man one million dollars for each year of service.

It was a life-changing proposition, one that most marked men could not resist. Wealthy NOMARs also could not resist the notion of having a sex slave at their beck and call every day of the year. However, not every marked man was called. The Service tried their hardest to make the best fit possible, but the marked man had to agree to take whoever they chose as their Master, be he old, ugly, mean, or all of those.

At fifteen, I wanted a normal life, so I decided not to attend The Service Academy. I kept my options open about enrolling in The Service, but I was confident that I could make something of myself either way.

After being relentlessly pursued by multiple boys my first month of high school, I thought it best to get a protector. Always analytical, I decided to go for a senior because I thought it would only last a year and no one would bother to fuck with me with him in the picture. He had to be popular and I wanted him to be handsome and funny. Was that asking too much?

It only took a few days once I started looking. I had narrowed it to a member of the basketball team, the wide receiver from the football team, and the student body president. I watched them all in the halls and the cafeteria. I didn’t like how cliquey the president was, and the football player, while drop-dead handsome, was not nice to his fellow students who were not on the team.

Two days later, Whitman arranged for me to watch his practice. We lingered in the locker room afterwards until we were the last two left. He seduced me and we fucked for the first time. It was gentle and amazing. I had never felt such pleasure and Whit seemed to really like it, even more than I did.

My plan had worked to perfection. During my freshman year of high school, Whitman and I fucked liked rabbits. Most of the other guys in the school were jealous as hell, but none of them bothered me after that. When Whit graduated, he took a basketball scholarship to a local college and wanted to continue our relationship, but I was done.