Loch was forced to pick a member of the University of North Carolina football team to date early in his freshman year.  He had taken a chance on a scrawny freshman named Marcus.  Two years later, in their junior years, Marcus has blossomed into a hulking football-playing man.  Loch has kept up with the man he believes is his true Master, but now they have to meet each other’s families.  Either their connection will remain strong or fray under the scrutiny of their loved ones.  Also looming in the future is the end of their senior year.  What will happen when they go their separate ways? 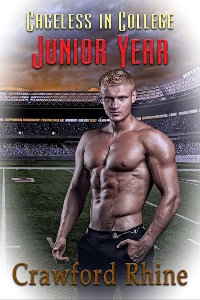 June had brought the end of school and the beginning of another summer in Charleston for me. I had just finished my second year at the University of North Carolina, having the most amazing sexual experience of my life.

Now I was supposed to go home for three months and live without it?

Marcus Battle had been my boyfriend since the first month of freshman year when the football team decided that I needed one of them to fuck me on a regular basis. I didn’t like being told what to do, but at the same time, I was given free rein to choose any football player I wanted to date, so it was a win-win situation for me.

I was a marked man, in a literal sense. On my face was a bright blue mark running from my earlobe to my chin. The mark appeared on the exact minute of my birth on my thirteenth birthday. It signaled to the world that I was a man who was sexually attracted to men, and since our world only contained men, it was one big meat market for me.

Fortunately for me, I had not run into any major problems. Once in high school, I found a popular senior to date who usually ran interference for me and kept trouble at bay. I did the same thing the next year and then the next and assumed that I would live my life that way. These men were easy to manipulate, and most of them bent to my will without even the flicker of fight in their eyes.

When I arrived on campus at UNC, I naturally thought it would be smart to find a protector, but I also let loose a little and fucked around with a lot of guys. By the time the football team offered me their protection, I was ready to see what came of it. Dating several of the older players, I found them lacking. Fortunately for me, I was intrigued by a quiet freshman and gave him a chance.

Marcus turned out to be the most amazing man I had ever met. He was not as susceptible to my charms as every other NOMAR I had met and refused to fuck me or even let me see his cock until I had committed to him. There was some kind of attraction between the two of us that I could not explain. I had never felt anything like it before, and I could not get enough of it.

It took two weeks for me to take the risk and accept Marcus as the football player that I wanted to date. He had been there when I needed him and I told him that I wanted him to be my boyfriend. He was excited, but still held out on sex until I informed the team of my decision.

When Marcus and I finally fucked, it was mind-blowing sex that I had never felt before. Marcus’ cock was huge and he certainly knew how to use it, but the real fire came from the connection between us. We just couldn’t get enough of each other, and therefore we had to set limits very quickly. Marcus and I were both excellent students and he also was a member of the football team, so we didn’t want either of those two things to suffer just because we couldn’t stay out of each other’s pants.

We spent our first year together feeling each other out. Marcus demanded that I work out to be able to keep up with him, and I was more than willing. I didn’t want anything to hold me back from being with him. Marcus and I had a great year together, and over the summer, he had told me to take an older lover to keep me out of trouble.

I had worked out a deal with the boss at my summer job at IBM that allowed him to fuck around with me in exchange for a summer job and the company scholarship each school year. Mr. Lewellyn, my boss, had taught me more than I bargained for. He was into bondage, and the things that he did to me, made me realize that I wanted to explore it with Marcus.

My chance to do just that came at the end of summer when I bound myself to Marcus’ locker on the last day of football camp. He took total advantage of me and we wound up spending the rest of the summer together. It was such life-altering sex, but neither Marcus nor I were ready to fully realize what it meant.

Marcus Battle had started to make some noise on the football field in his second year and we both had matured physically in the year since we had met. Marcus had grown into a man and not an overgrown boy like before.

A spring break trip in our sophomore year to the Bahamas had sealed the connection for us. We both had enjoyed someone else’s attention on that trip, but had come out of the other side to realize that we were what each of us needed. I had marked him as my man and he had marked me as his.